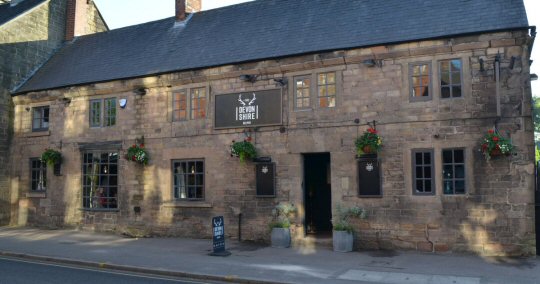 Well, the Boy Wonder has been using his bargain hunting skills again and snagged us an incredible deal on Groupon for a weekend away in Wakefield. So off we tootled on Friday evening, all eager anticipation for a cracking weekend sans chick, and it wasn’t long before we pulled up in the hotel car park, despite travelling in rush hour traffic. The hotel itself is nice enough; clean spacious lobby area with a large bar in it and it was bustling with activity already so I guess plenty of other savvy people had spotted the Groupon deal too!

Our room was very spacious and clean with all the usual mod cons you expect in a four star establishment. We got freshened up and changed and headed down to the restaurant, as we had booked our table in advance and our deal entitled us to a two course dinner with glass of Prosecco each on this first night. You could eat from the a la carte menu for a small surcharge depending on what dishes you chose, but to be honest there was enough choice for the Man and me on the regular menu. 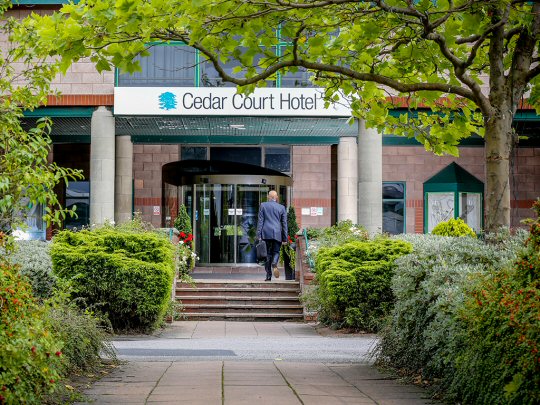 For starter I had the Smoked Haddock risotto pearls and His Nibs had the Corned beef hash croquettes. The risotto pearls were larger than I was expecting and had a really flavoursome filling, with the perfect amount of haddock to just add to the flavour rather than overwhelm it. A nice crunchy outside completed the dish beautifully.  The Mans croquettes were filled with really smooth potato, a nice amount of corned beef and had a fantastic crispy outer; the lovely meat juice gravy they sat in just added to the yum factor even more.

It wasn’t long before our main courses were placed in front of us and I was looking forward to tasting my open lasagne of Artichoke, Leek, Goats cheese and Tomato. Luckily for me it tasted just as fantastic as it looked; the vegetables were cooked perfectly and the cheese had a great crisp flavour to it. My side order of a mini Caesar salad was equally tasty with the absolute right amount of dressing to coat the crisp leaves, cheese and croutons without them swimming in it. I really enjoyed every mouthful of my main course and so did The Boy Wonder with his stacked burger.

The burger itself was satisfyingly meaty, great tasting and was perfectly cooked; all the other components (tomato, gherkin, Cheddar cheese and onion ring) were equally amazing. What I really liked were the gherkins - they were fresh and crispy with a delicious mellowness to them, rather than being the usual pickled offerings you get in burgers. The whole dish was set off beautifully by a gorgeous toasted Brioche bun that had a wonderful buttery taste and a nice crispness to it provided by the toasting.

Both of us were pleasantly surprised by the quality of the food here, not that we were expecting it to bomb, but more because hotel food can sometimes be a bit lack-lustre. Now I’m not saying it was the most outré, or avant-garde menu you’re likely to encounter but the team here have tried to give mainstream classics a bit of a twist, and I think they’ve done it well. It is one of those hotels where if you were staying as a business person you could happily eat here and enjoy the meal at a good price and not have to faff about going elsewhere to eat.

We decided to pay extra and have dessert as well, purely because of the quality of our previous dishes. I had the Apple and Blackberry Samosas with Cinnamon sugar and Toffee ice cream and the Man had a Rhubarb Crème Brulee with Ginger shortbread. The Samosas were lovely and crispy outside, not at all greasy, with a great amount of filling. The sweetness of the fruit was perfect and the hint of Cinnamon was just right. The toffee ice cream was really rich and actually went well with the Samosas. Now as you know dear reader we have sampled many a crème Brulee and I have remarked on the great sugar crusts but without doubt this one was the thickest one we have encountered so far. My feathers positively twitched with glee as I heard a resounding crack from the other side of the table, this was the mother of all Brulees let me tell you. The crème itself had actual pieces of sweet Rhubarb in; not too much, just enough to give the custard a fruity hint that went superbly with the ginger shortbread.

The staff were all pleasant and very smartly dressed and nothing was too much trouble for them. Every table was spotlessly clean and maintained efficiently so that the restaurant was displayed to its full potential.

Breakfast the next morning was equally impressive. Our server came and took our order for teas and coffees and directed us to the different stations; cereals, pastries and juices were on one side of the dining room, the hot buffet cabinets on the other. We served ourselves with Pain au Chocolate and croissants first with a glass of fruit juice before we went up for our hot options. I paid an extra £1.50 for a Yorkshire Kipper and then piled my plate with Scrambled egg, grilled tomato, hash brown, whole field mushrooms and bacon.

The Man was just as gluttonous when he went to help himself: a veritable mountain of Bacon, sausage, fried eggs, beans and hash browns were soon joining my plate at our table. We filled up in anticipation of a busy day of retail therapy in Wakefield itself (which was most enjoyable, on my part anyway), and then availed ourselves of the hotels spa facilities late in the afternoon. Had we not already been in contact with another local restaurant we could quite happily have eaten a second night in the hotel restaurant.

If ever you find yourselves at the Cedar Court hotel, whether on pleasure or business, at least you can rest assured that you will be fed and watered well.