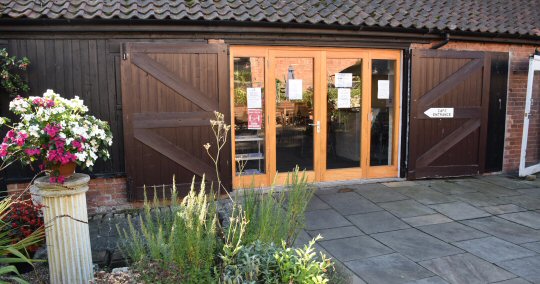 Breakfast At The Crew Yard Cafe And Bistro, Budby
This Review | All Reviews

Coffee From Darkwoods Coffee in Huddersfield

One of the best things about doing a food blog is meeting people whose passion, fire and enthusiasm for what they do exudes from every pore, and Damian of Dark Woods Coffee is the epitome of this! As well as being so lovely and friendly (and easy on the eye, it has to be said!) he just carries you along on the wave of joy that he rides when it comes to ‘the bean’. Damian had invited me along to see him at the Fine Food North show in Harrogate in October 2021 and said that he would pop me some coffee aside to try. 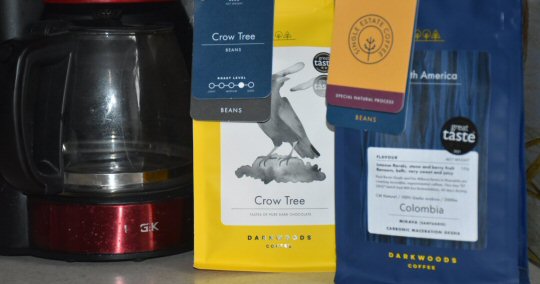 It was easy to spot his stand; Dark Woods Coffee is packaged in distinctive dark blue (producer series) or bright yellow (core range) bags, so the stand had lovely visual appeal...and did I mention that Damian is good-looking, too? We said our hello’s and then started talking about the coffees that Damian had set aside for me to try back at the nest: Crow Tree, which he described as a ‘crowd pleasing’ blend, as well as a single estate coffee from Colombia. During our chat I learned a few things about how different ways of drying the beans and processing them leads to the different characteristics of the taste we experience; as I said, Damian exudes passion and enthusiasm for his product and wants to share this with everyone he meets. Not wanting to monopolise him, I bade Damian farewell and said I would let him know how I got on with the coffees he’d given me.

The single estate coffee from Colombia sees the bean being allowed to dry naturally inside the coffee cherry before it is cracked out, so right from the get-go it is treated with utmost respect. We ground the beans for our machine at the nest, and on opening the bag of beans the aroma was incredible; sweet, floral and playful in tone! This particular offering won 3 silver stars at the 2021 Great Taste Awards and it’s easy to taste why; the lightly roasted beans are bouncy, bright, sweet and rounded on the palate, with superb flowery notes coming through. I enjoyed this so much that I actually finished my cup before His Nibs – something that never happens! If these beans were coated in milk chocolate they would be amazing, and just as irresistible to eat as they were to drink!

My other gift from Damian was the medium-dark roast minx, Crow Tree, which is a blend of coffee beans from various South American coffee producers in Peru, Bolivia, Colombia and Honduras. For Crow Tree, Damian and the Dark Woods team buy from season to season, so this blend changes annually in its finer flavour profile, and has previously won 1 star at the Great Taste awards in 2017, and 2 stars the following year. This particular batch promised ‘tastes of pure dark chocolate’ on the packet, so The Man and I had high hopes, and we weren’t disappointed. I was pleasantly surprised by how easy-drinking this was, given that it was a darker roast and was soon on to my second cup. Dark Woods Coffee offer a wide range of roast-levels in their core range (which are all imaginatively named) as well as accommodating different brewing methods that their customers may use.

Coffee lovers definitely need to head over to Dark Woods’ site, www.darkwoodscoffee.co.uk  and try these beans for themselves!