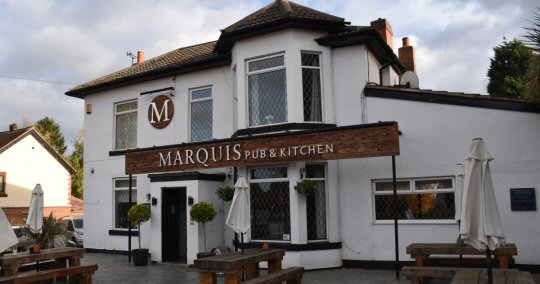 A Flock Sunday Lunch At The Marquis Pub & Kitchen, Codnor
This Review | All Reviews

Well Bloggers, sometimes lady luck just shines on you, and when she does you say “thank you very much” and get on with the job in hand. The Greyhound were doing a Facebook competition to win a free curry for its Curry Night that it holds every Thursday, so the Boy Wonder entered -  and only blooming won one ! Well, you may not know but On Curry Night there is an offer to get 2 curries for only £9.95, so we decided to go for a family treat; the chick and I would have our curries for a tenner and the Boy Wonder would get his free of charge. So off we flew to The Greyhound, settled ourselves in with a lager, glass of wine and grapefruit juice and perused the Menu. 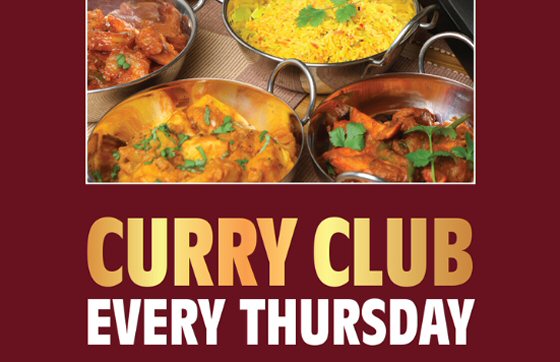 The Curry Menu is quite impressive with several Asian curries on offer as well as a Thai Red Curry, and a Thai Green Curry. I decided fairly quickly on the Thai Green Chicken Curry, the Chick had Chicken Korma and The Man Bird had a Beef Madras. Now this was quite a departure from the norm for him, as he always says that beef is tough in a curry, but seeing as the food had been so good on a previous visit he decided to “risk it for a biscuit“ in his words. The poppadoms arrived first, and they were proper dinner plate sized affairs rather than the saucer sized things you get at another well known chain that also has its curry night on Thursday. They were lovely and crispy, not greasy, and there was a good size dollop of mango chutney in a dish to dip them in. As usual it didn’t take us long to demolish them, so then we awaited the curries themselves. It may have been an “offer night”, but I can say that every care and attention to detail had been taken as if it were an a la carte dish. The Curries were presented on a paprika garnished square plate, with the curries being in separate little bowls to contain them. Then there was also a timbale of rice and Naan bread that had been sliced in half on the plate.

Little Chicks Korma was beautifully flavoured, not over cloyingly creamy, and just a hint of coconut and almond, and my baby tucked in to her meal with great fervour. My Thai Green Curry had a lovely Chilli and Garlic kick to it, and the Lemongrass gave it a bright zing on my taste buds, so I was exceptionally happy with my meal. So far so good, how would the Beef Madras measure up? The look on Man Birds face said it all - the beef was not tough or chewy in the least. I sampled a piece of beef myself, and can confirm that it was melt in the mouth, and the Madras sauce was really well balanced ,  although not for Curry Virgins !

We were having such a pleasant evening we decided that this time we were going to sample the dessert menu, as last time we were completely stuffed after having starter and mains. The vast majority of the desserts are home-made, with only a couple of them being bought in, which is increasingly rare these days. I chose The Bread and Butter Pudding (homemade), The Boy Wonder had Creme Brulee (homemade) and my Chick had Sticky Toffee Pudding (surprisingly bought in).

It didn’t take long for the desserts to arrive, and soon we were tucking in to sweet delights. My Bread and Butter pudding was lovely and custardy, full of juicy sultanas and raisins and delicately spiced, completely different to the bland, soggy impersonations that you experience elsewhere. The Man Birds Creme Brulee was also a winner, the sugar crust gave a lovely sound as it cracked and the sugar had been beautifully caramelised rather than burnt, which makes the crust bitter tasting. The Creme had a lovely vanilla flavour to it, not overpowering, just enough to compliment the sugar crust. No need to ask whether the Sticky Toffee Pudding was tasty - it had been demolished in double-quick time, and was declared to be very Toffee – y and very sticky!

So once again, I find myself urging you to go to The Greyhound at Belper for its Thursday night Curry Night if you haven’t already done so. And don’t forget to keep a beady eye on their Facebook page for future competitions and giveaways - I shall certainly be entering every one that I see!