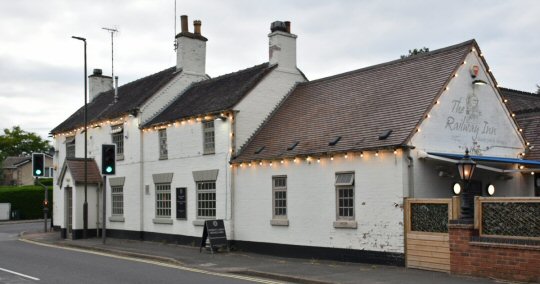 Out For Dinner At Plesters On London Road, Sheffield

The Man Bird has been at it again, trawling through Groupon to find us a good deal at a local restaurant. And, yet again, he came up trumps; god, I love this Man!!. Plesters Restaurant is 25 miles from The Nest, in Sheffield, which is currently the hometown of Fledge as she’s studying there, although we were sneaky and didn’t invite her along! Sometimes it’s nice to just be a couple rather than parents, y’know? 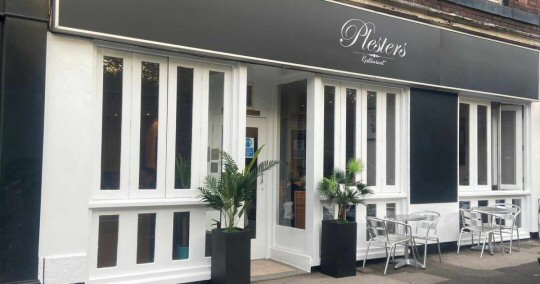 In common with many other restaurants in the Steel City, Plesters doesn’t have its own car park, but there are lots of side streets in the vicinity that you can use - which is just what we did. We strolled along the A61/London Road in the Heeley district for a couple of minutes from where we’d parked the jalopy and arrived at Plesters. The venue had got all its hinged windows open to let the warm evening breeze flow through and we could hear the chatter of diners spilling out onto the street as we approached. Plesters also has a chic sort of kerb appeal, thanks to the couple of bistro style tables and chairs outside and the pair of potted palm-type plants that frame the entrance. 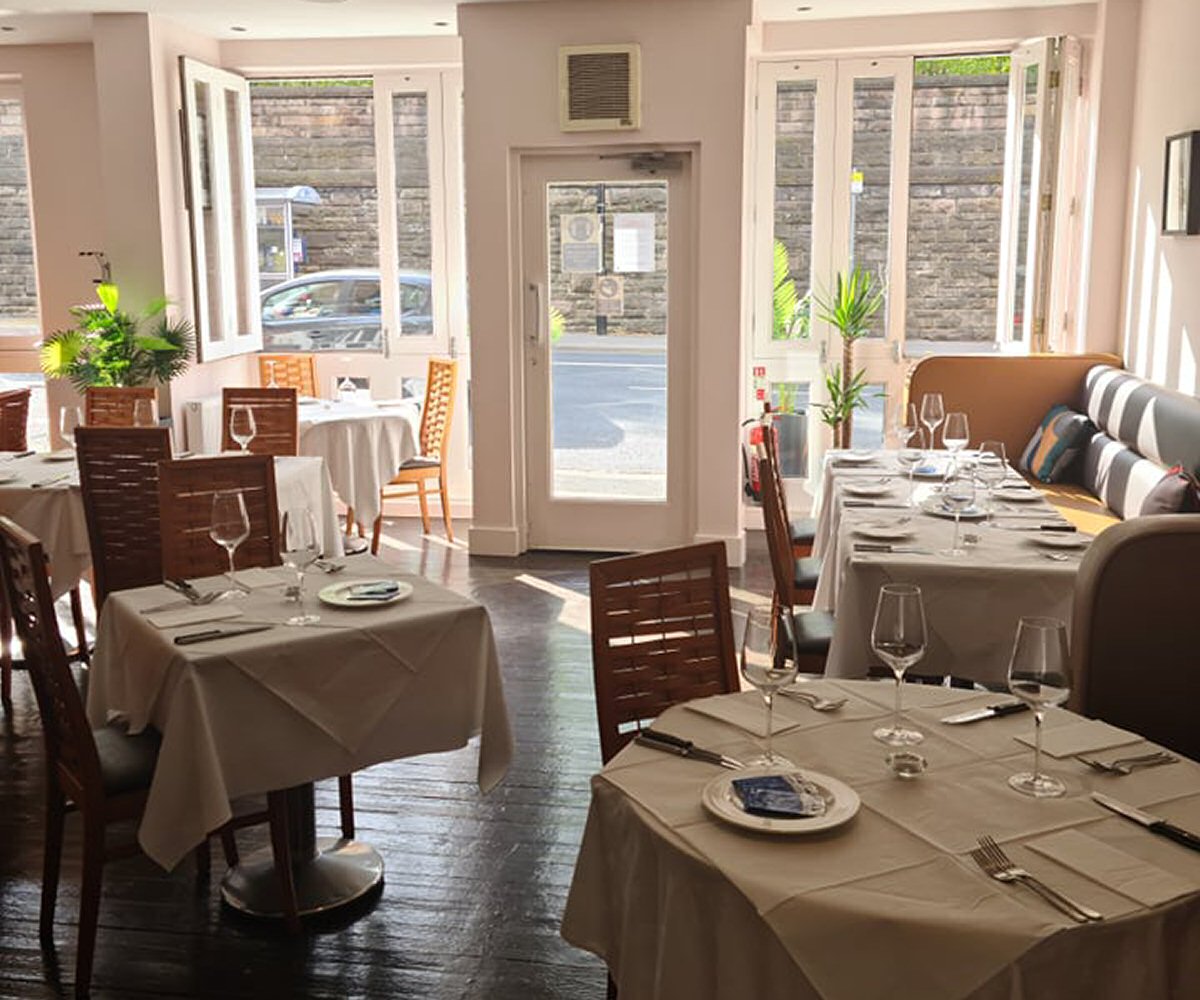 We were greeted warmly at the door by (I’m assuming) the husband of the husband and wife team that own/run Plesters and shown our table, a lovely spot at the window where we could people watch and enjoy the setting sun. To say it’s on the main road, we didn’t notice traffic noise, which surprised us in a pleasant way. I loved the open kitchen; as you know, I love the hustle-and-bustle of this type of layout, and our noses were certainly enjoying the mouth-watering aromas drifting from it! 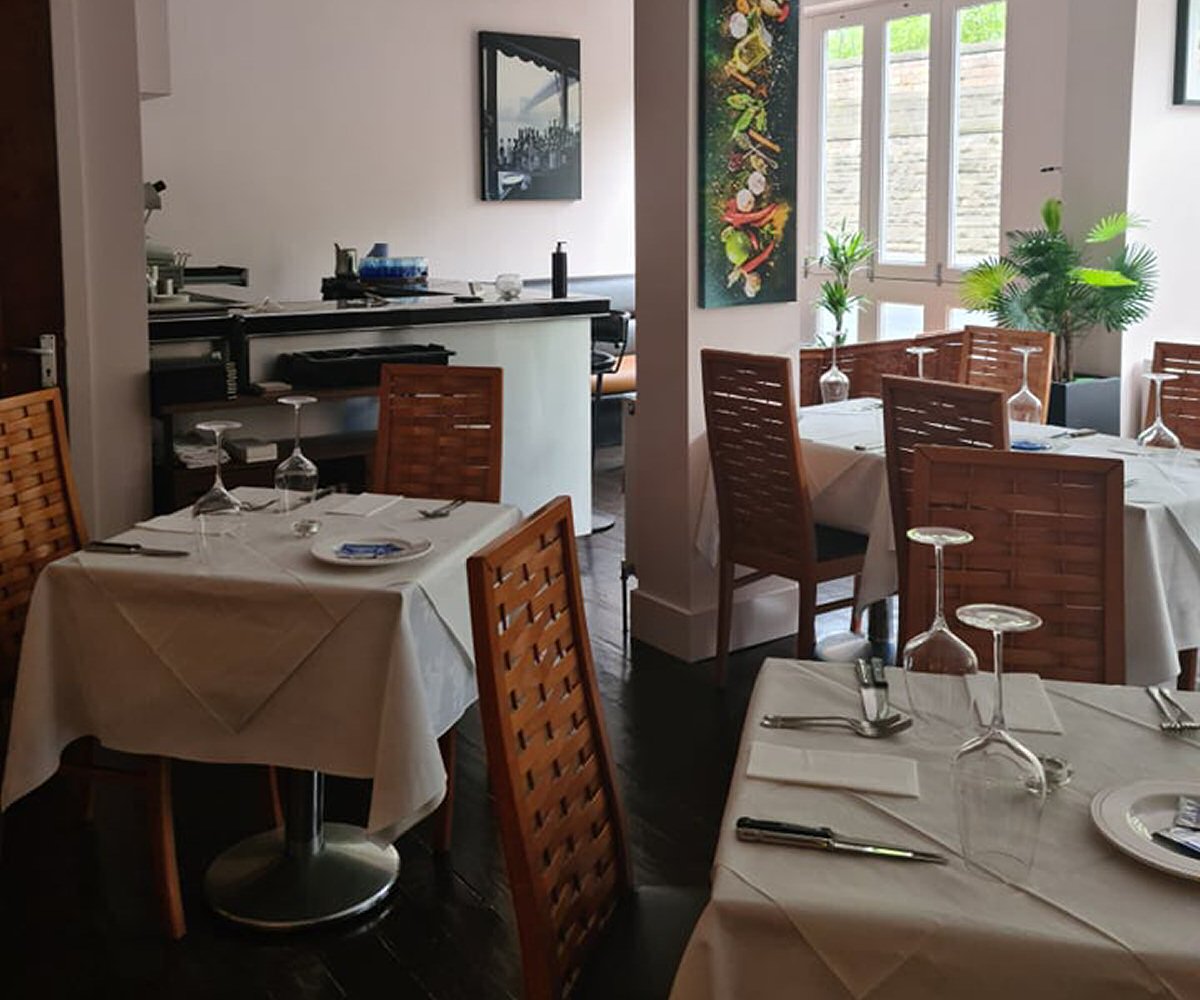 Plesters is simply decorated; its white walls are adorned with prints and the outdoors is brought inside with plenty more types of plants in pots scattered around the space. The dark wood floors are complimented by warm, mid-toned brown, high back chairs and a two-tone brown banquette along one wall -which I was sat on. Each square table was simply set with disposable white cloths, handy hand sanitising wipes, and stylish wine glasses for those tempted to indulge in a bottle of wine. I decided to have a large glass of Sauvignon Blanc, a Chilean one, the Australian version was only available by the bottle, and His Nibs had a small bottle of Moretti. We also ordered some water for the table as it was a warm evening.

Our Groupon deal (which The Man had snagged on one of those ‘extra discount’ offers too, so it was even cheaper than usual!!) entitled us to a two course surf and turf meal for two and had cost a mere £25.60, instead of the regular Groupon price of £32 – which would still have been an absolute bargain with hindsight! This includes any starter up to the cost of £7.25 and mains to the value of £19, which is everything on the regular menu, and then if you want to upgrade to daily specials and indulge in sides and desserts you just pay the extra cost; fair enough, no?. 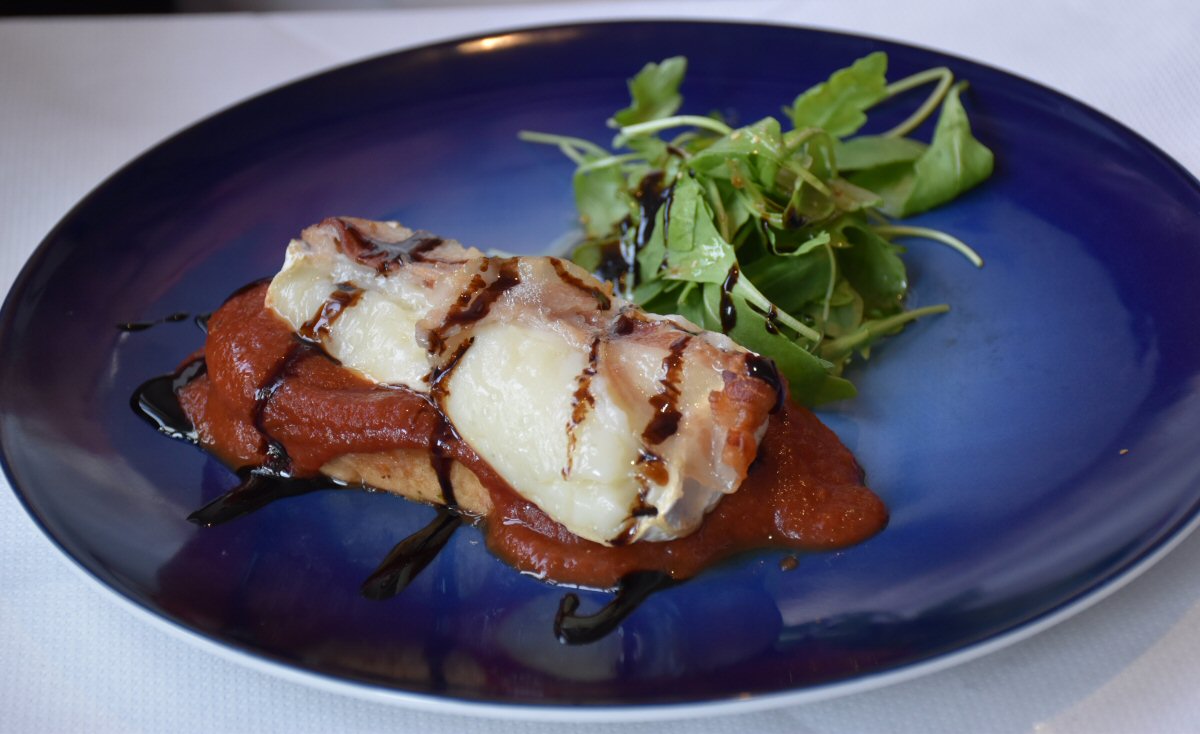 To say it was a midweek evening, the restaurant was lovely and lively and the age group of our fellow diners was very varied; safe to say that Plesters has mass appeal! You really couldn’t wish for a more chilled, informal atmosphere than the one created at Plesters; it was just like being in a small, local bistro off the beaten, tourist track that you’ve stumbled upon when on holiday. As the evening progressed we even struck up conversations with the table next to ours and the one beyond that; ok, the topic was the puddings we’d ordered (they did look and smell amazing, to be fair), but it still counts! Anyway, back to the starters: I’d ordered the Baked Goats Cheese and The Man opted for the Cod Goujons. 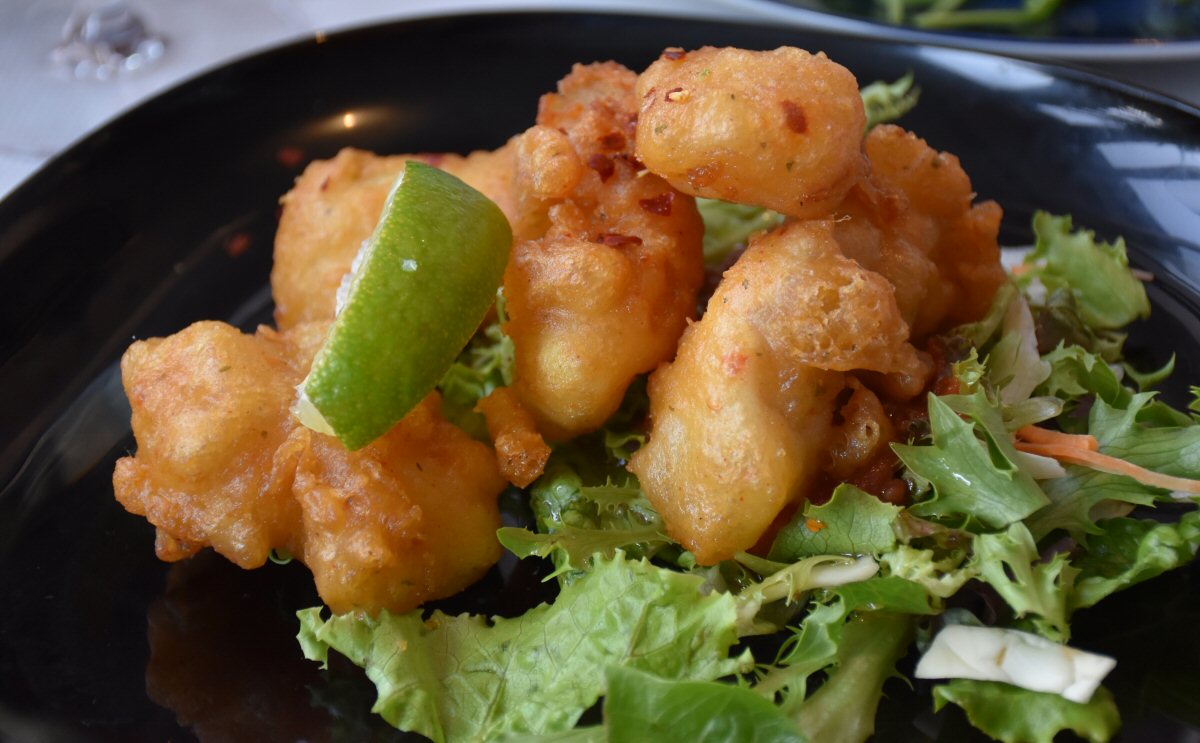 My Goats Cheese was a visual feast, served as it was on an Azure platter that contrasted well with the verdancy of the Rocket salad, deep red of the Tomato bread and pale cheese. I am pleased to report that it tasted every bit as good as it looked; nothing fancy or complicated, just good, clear flavours that bounced off each other superbly. The musk and tang of the Goats Cheese balanced the sweet intensity of the Tomato used to soak the Garlic Bread slice in, and then the sharp peppery Rocket cut through it all brilliantly.

The Man Bird knew he had chosen a rather fine starter when we both looked up at the distinct crunch the gossamer fine Tempura-esque batter made as His Nibs’ knife touched it. Even better, it wasn’t greasy in the slightest and had been pimped with fiery Chilli flakes and other beloved Caribbean spices which really allowed the soft, mellow taste of the Cod to shine in the mouth. Talking of the Cod, the chunks were wickedly moist on the tongue and deliciously sweet. The portion size was very generous as well, so His Nibs was more than a bit happy with his starter choice; so happy in fact that he ate the crisp, mixed leaf salad that accompanied the Goujons! He didn’t use his wedge of fresh Lime though, so I pilfered that to drizzle over my rocket: waste not, want not. 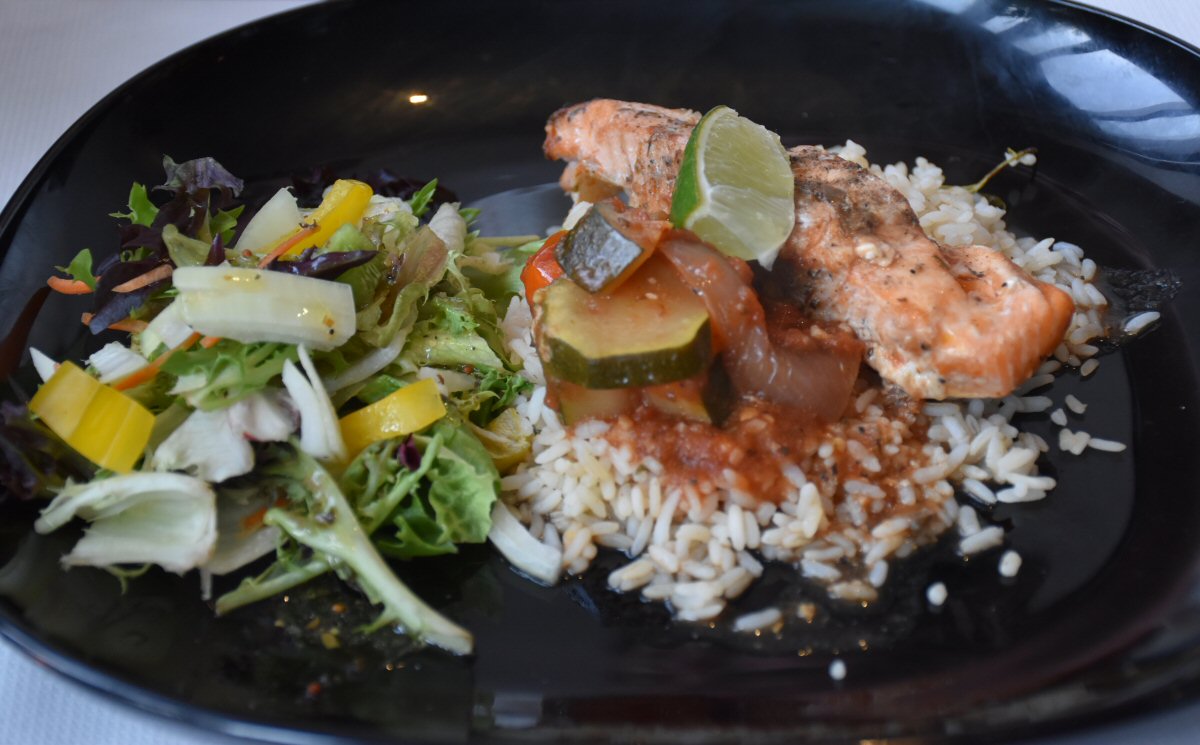 I carried on the Caribbean theme with my choice of main, Jerk Salmon, whilst His Nibs had succumbed to the temptation of the grilled T-bone Steak on the specials menu; this dish carried a £10 surcharge to it. By now Plesters was filled with a symphony of delicious aromas, many of which were wafting out onto the street and making folks glance in as to the source, but due to the bijoux size of the restaurant walk-ins aren’t easily accommodated when so many tables are reserved ahead.

It wasn’t long before our mains were winging their way over to us and we both grinned with delight as we saw them; as with the starters, presentation was excellent and we couldn’t wait to tuck in. My Salmon fillet had been cooked skin-side down to retain its natural succulence and crisp up the skin, and as I took that wonderful first bite I got a marvellous blast of the fiery Caribbean spice blend that had been used to marinate the fish. I have to say that I really enjoyed the contrast of the Salmon’s soft sweetness and the sharp heat of the Jerk spices; they certainly grabbed the attention of my palate! Tomato, Onion and Courgette had been sliced and sautéed in garlic, providing a tasty, textural element to the dish, along with the cool, crisp mixed salad. Fluffy white rice, flavoured with Coconut and Thyme was the final component of my meal, and it married everything together seamlessly. 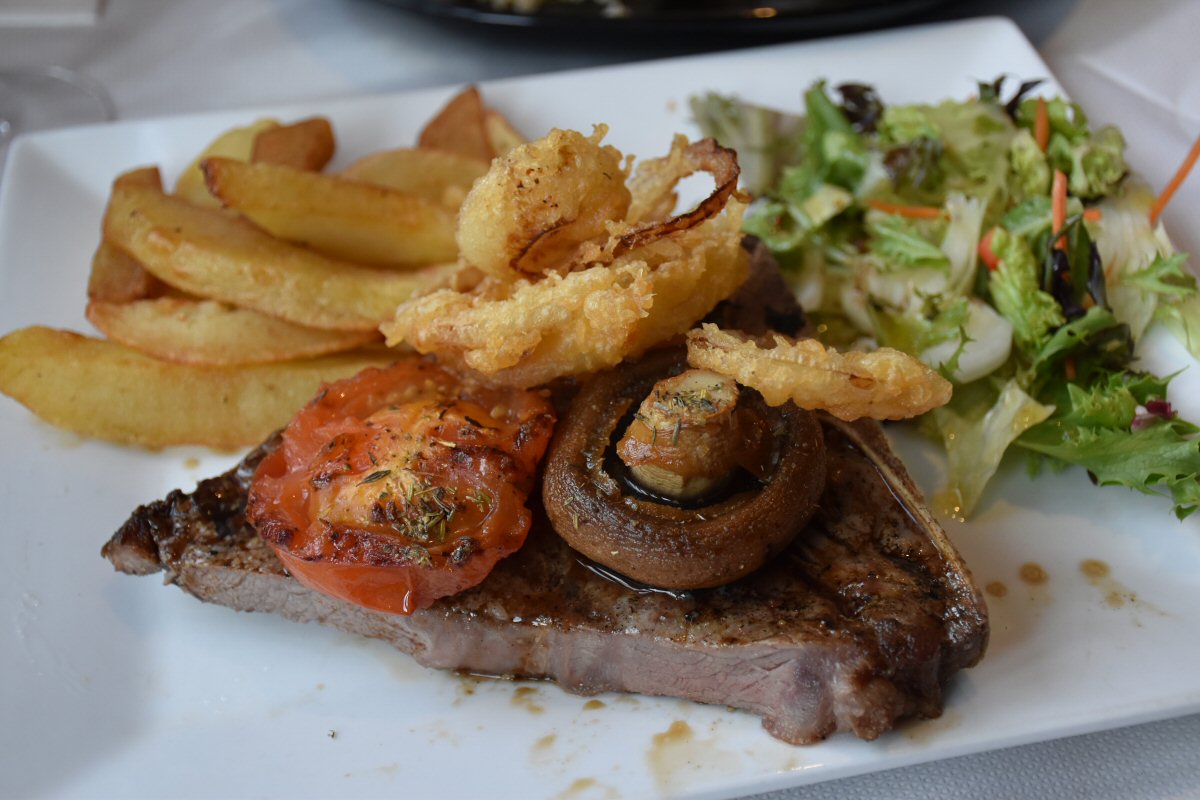 His Nibs’ T-bone steak was cooked exactly as he’d requested and had been rested sufficiently for the fibres to relax and reabsorb those all-important, flavoursome juices that bring the meat to life in the mouth. According to The Man, the T-bone is perfect for greedy steak fans because you get two-cuts-for-one; namely the Sirloin/New York Strip cut and the Fillet. This means that you can savour two very distinct steaks within one meal, comparing and contrasting as you make your way through it. Both cuts were lovely and juicy; the Fillet was sweeter and more sophisticated than its bolder, ‘beefier’ Sirloin peer, and neither needed much pressure from the knife to be cut.

There was a gentle hint of garlic that came courtesy of the melted butter that added a seductive glisten to the steaks’ surface, and I liked the earthiness of the whole grilled field Mushroom that got passed over to me. No such luck with the joyous sweetness of the squishy grilled, herbed Tomato, now that Him Indoors has taken a liking to them – oh well, some you win, some you lose! We both swooned at the Onion rings, cocooned as they were in that divinely crisp Tempura batter: next time we visit we may just have to order an extra portion of those little minxes! As if to draw attention to just how ridiculously crisp the Onion Rings were, the chunky Chips were soul-satisfyingly soft, hypnotisingly so actually, and had that gentle sweet hint to their flavour that never fails to please. Normal service was resumed with His Nibs and he left the side salad on his plate, falling back into his salad dodging ways! 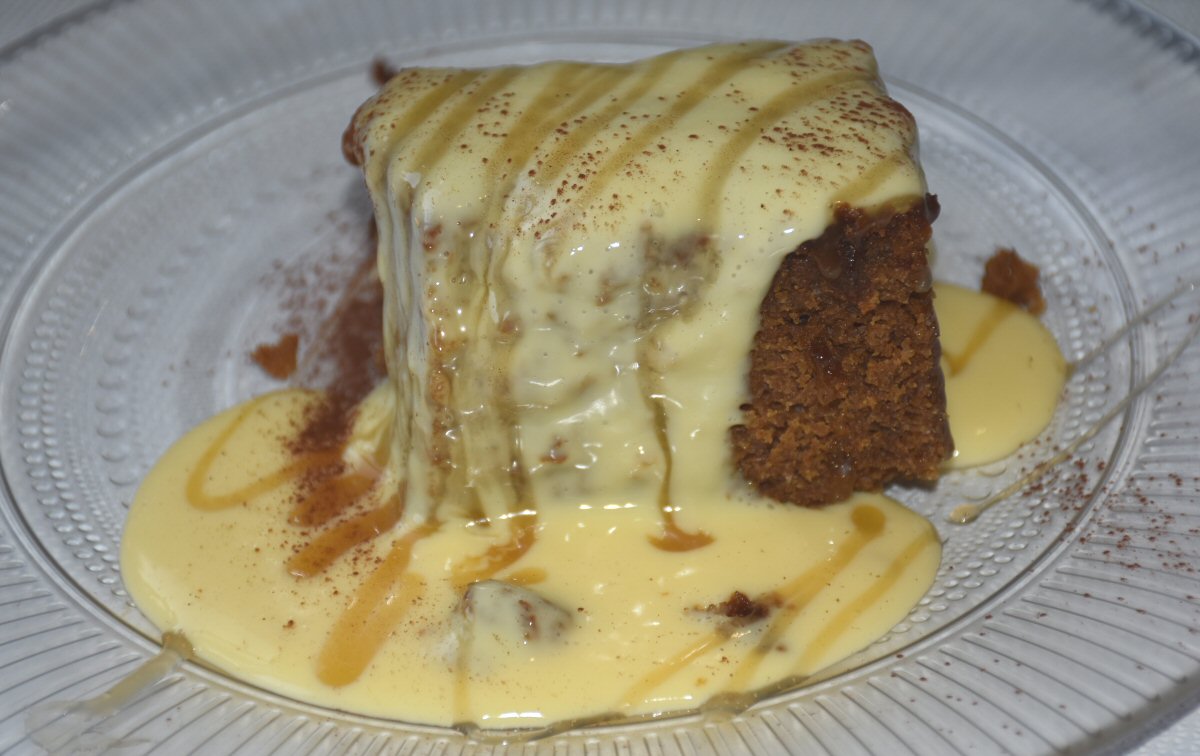 As is so often the case, our original plan was to just have the two courses, but I’d spied fellow diners indulging in Ginger Sponge and Lemon Drizzle earlier and they looked too flipping good to not have; my bad! By the time it came to be our time for pudding (all of which are home-made, by the way), the Lemon Drizzle had long-gone; undeterred, I had the Shortbread ‘Wagon Wheels’, whilst The Man had Ginger Sponge and we both had custard. 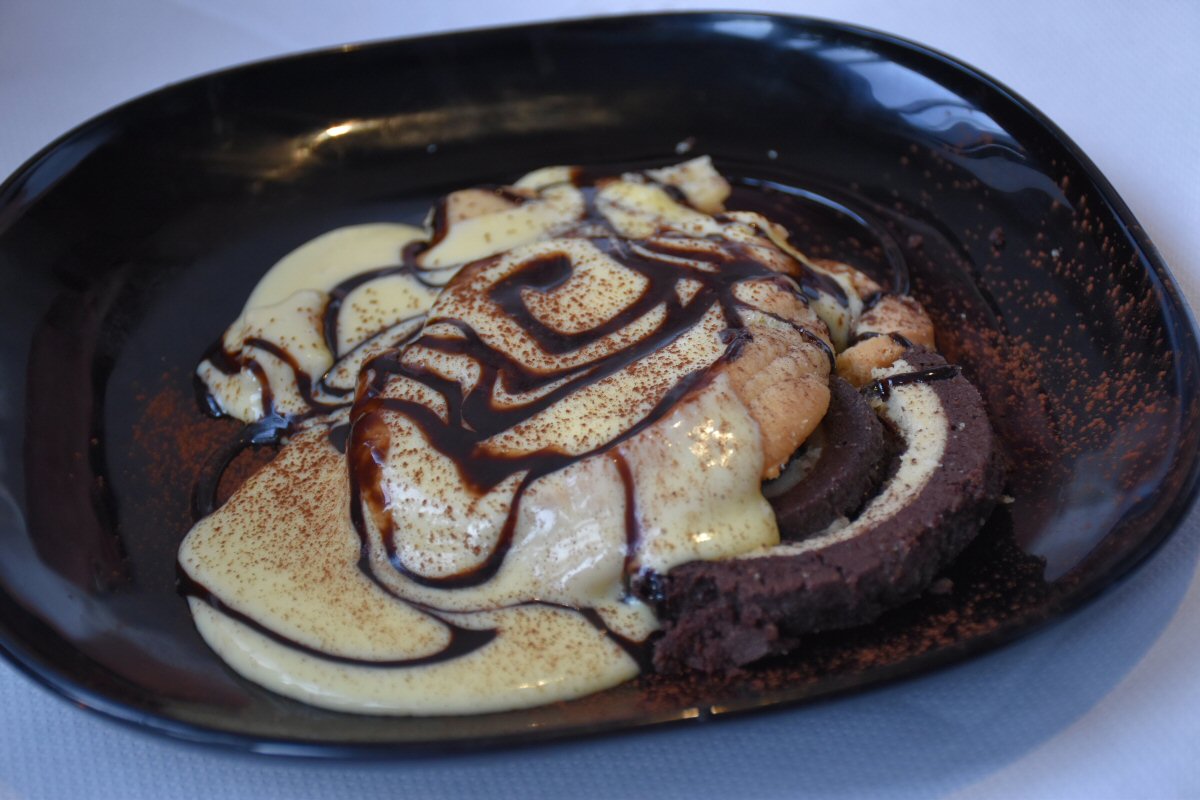 Dark chocolate and White chocolate shortbread had been swirled together to create an eye-catching spiral, and I was mesmerised by the spectacle as well as the serious butteriness of this pud. The high fat content of the shortbread meant that it melted instantly on my tongue, glorious in its richness, and I savoured every single moment of it. I was glad I’d gone for warm, creamy Vanilla custard rather than my first instinct of cream, as it seemed to enhance the buttery extravagance of the Shortbread and added a beautiful relaxed mellowness to the dish.

Across the table, The Man Bird wasn’t holding back in his enthusiasm as he dug in whole-heartedly to the chunky slab of comfort that was the Ginger sponge! Although this pud was pleasingly dense in texture and just as bold in taste (thanks to a fantastic blast of Ginger’s warmth!), it was sublimely light on the tummy. Needless to say, both dessert plates were spotlessly clean!

We finished off with a couple of black coffees to bring our senses back to earth, chilling as we sipped at the hot liquid. All too soon it was time to pay the remainder of the bill and wander back to the jalopy, but what a fab evening we’d had. Hot Wings given to this delightful family team and their staff - Sheffield you’ve got a true gem here, make no mistake!