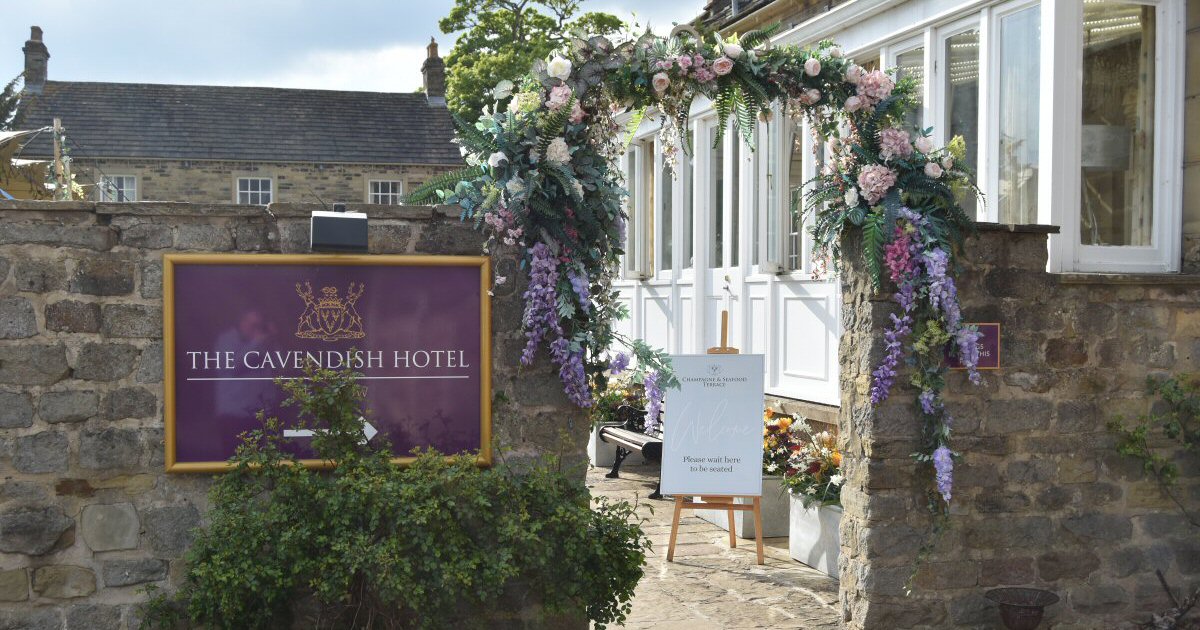 Starting Our Weekend Break With Lunch At Barringtons, Darley Dale

It’s long been a tradition in our flock that a holiday starts the moment you close the front door at home behind you. With that in mind, His Nibs and I felt absolutely no guilt whatsoever as we pulled into the car park at Barringtons at Darley Dale for a cheeky lunch on our way to a short break away with friends. Fledge was meeting us all there later, as she’d got some University work to do before her weekend fun could begin – unlucky kiddo, I’ll have an extra glass of wine for you though! 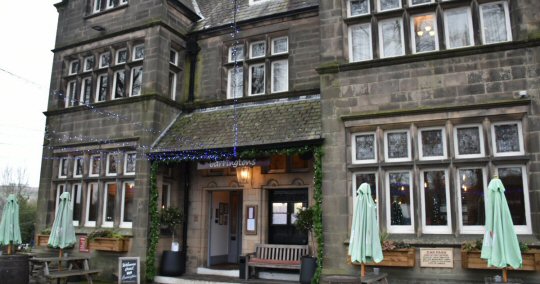 In common with a lot of businesses in the food and beverage industry, Barringtons has had a bit of a refurb during the various pandemic lockdowns. The decor itself hasn’t changed wildly (although it did look different thanks to the beautiful Christmas decorations all around), but the space had definitely altered! Instead of the dedicated dining space being the smaller room and the combined bar/dining area being bigger, the team had re-configured the layout so that the bar was now in the smaller area - still with seating in there for more casual dining - and the exclusive dining room was the dominant space. In my opinion it flows so much better and makes more sense to have it laid out this way, so it gets top marks from me. I still love the feature wall with its striking monochrome paper, and the high-back chairs are every bit as comfy as I remembered them from our previous visit! 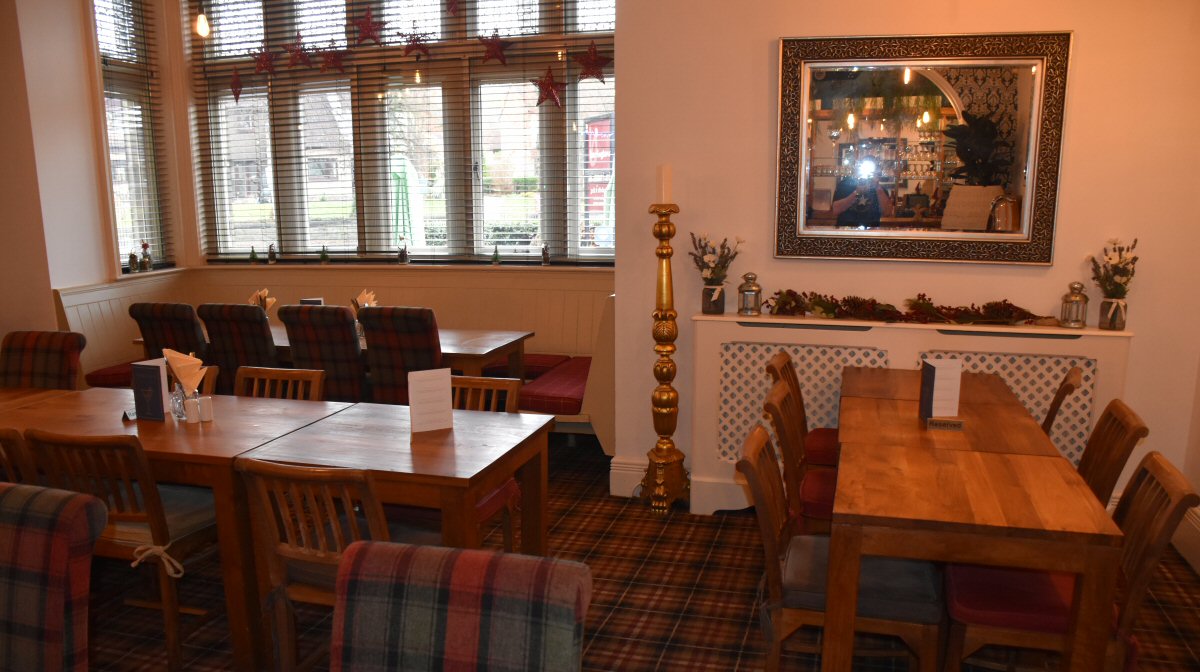 We were soon sipping our drinks; red wine for me (no spillage this time!) and a pint for The Man. Barringtons serve lunch from Noon-2pm on Thursday, Friday and Saturday, with the menu simply priced: all mains are £8.95, jacket potatoes range from £5.50-£7 and come with French dressed salad, coleslaw and butter, and sandwiches are priced between £7 and £8 and again come with a French dressed salad and coleslaw, but also have chips. 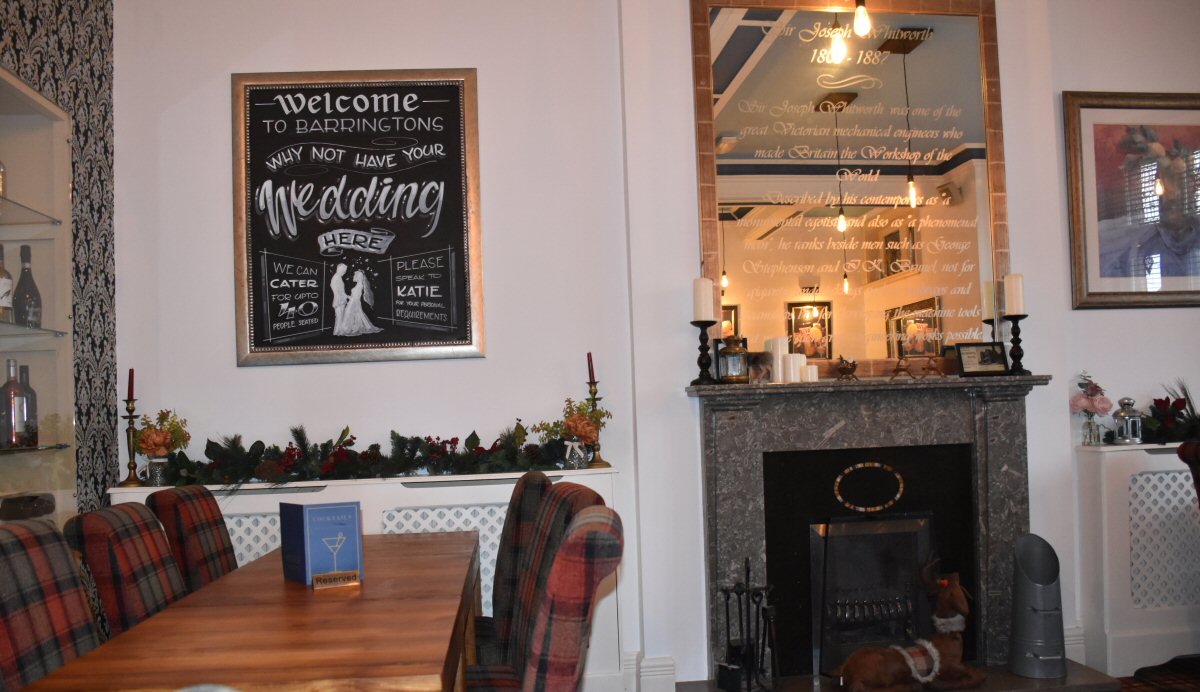 Just as we’d finished ordering our meals, Beef lasagne with mixed leaf salad and chips for The Man Bird and Bacon, Brie and Pear Chutney sandwich for me, a large group of friends came in. The dining room was already pretty lively, so this additional group saw only a couple of tables spare – not bad for a weekday! One thing we noticed last time we visited Barringtons was the friendliness of the staff and the speed of service, and on this occasion too it was the same standard.

It wasn’t overly long before our meals were being placed before us and the tendrils of steam rising from His Nibs’ Lasagne carried the mouth-watering aroma of the dish up to our nostrils; if it tasted as good as it smelled, he was in for a real treat! My Ciabatta was just as tempting though with thick slices of proper, farmhouse Bacon peeking out from under their creamy, melty Brie blanket. 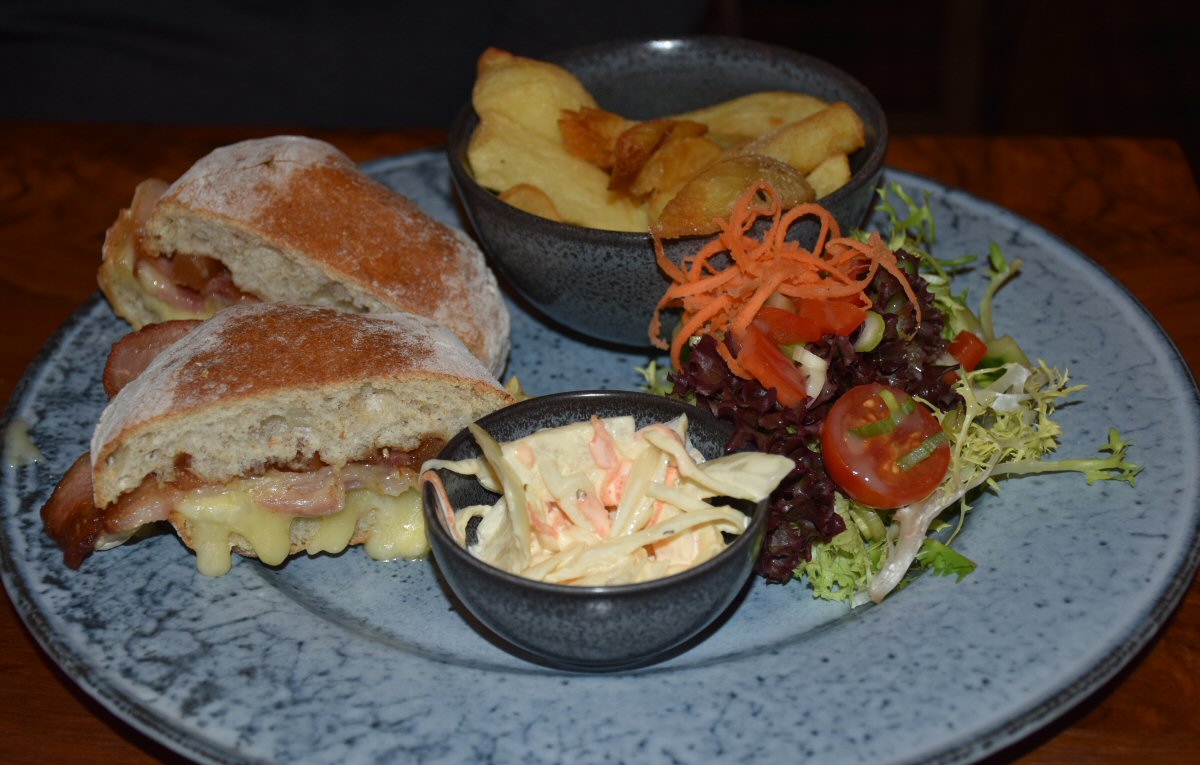 Both of us grinned at each other as we took that first, much anticipated first bite, and we weren’t disappointed; my Ciabatta sandwich was superb and His Nibs’ Lasagne delivered, too. When it’s cool outside you need something hearty and this homemade dish certainly was substantial, with its plentiful layers of pasta and meat ragu. Sometimes you tuck into a lasagne and feel that deflated sensation as you see a sea of pale pasta sheets but not much else; thankfully Chef at Barringtons makes sure that the lasagne is balanced with just as much meat. The Man Bird commented on how incredibly rich and flavoursome the beef ragu was, between mouthfuls, and said that the cheese top was lovely and crunchy too. There is a knack to getting the perfect ‘wetness’ when any pasta and sauce is involved: too dry, and it seems to need chewing forever; too wet, and it drips sulkily off your cutlery. Again, Chef got it just right; so if you like your lasagne, you could do worse than head to Barringtons to sample some. The light mixed leaf salad added some texture and a change of temperature in the mouth and the chips were magnificent with their super-crunchy outers and soft inners; the presentation was good as well, with everything placed carefully on the plate and the chips housed snuggly in a miniature frying basket. 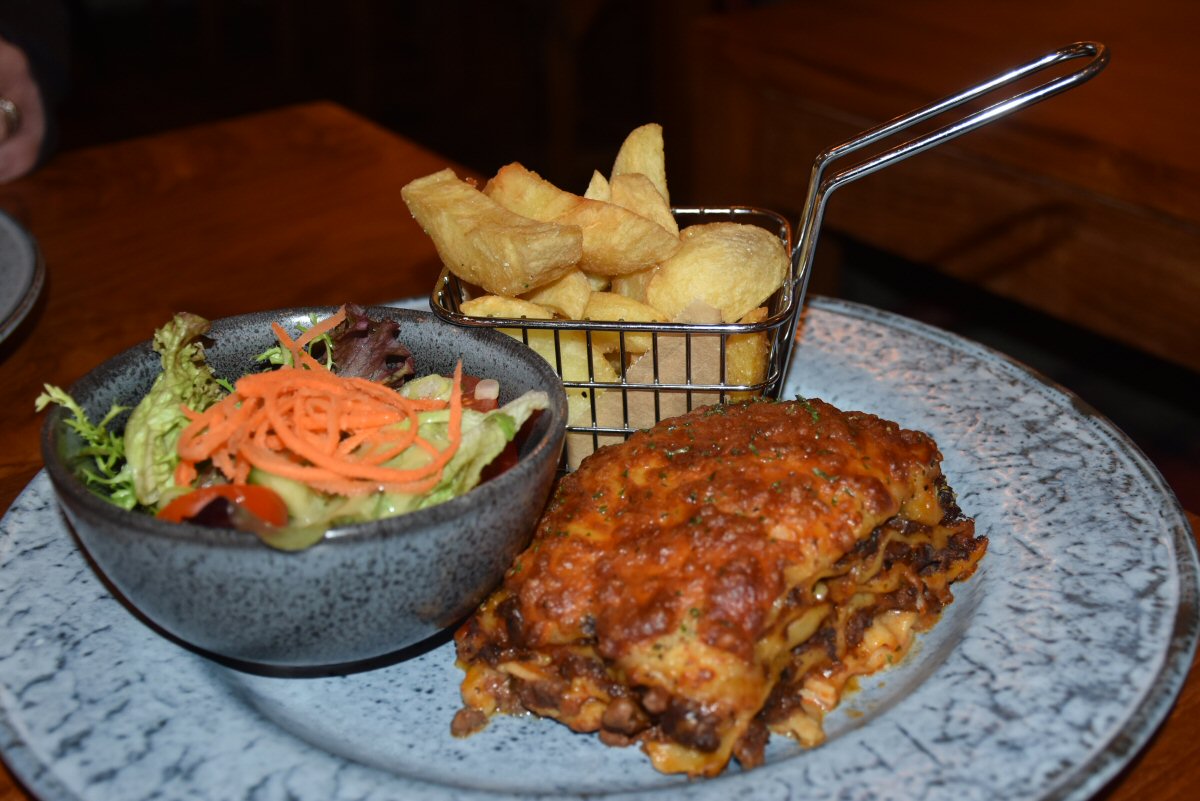 Visually, my Ciabatta sandwich had already won me over; as I said earlier, the Bacon was nicely covered in melted Brie and the smell was heavenly for a cheese-o-phile like me. The combination of crunchy Ciabatta, soft brie, pear chutney, and meaty bacon meant that I had to take my time to chew it properly, and the flavours poured over my palate with abandon. I liked the fruity element that came from the pear chutney; it lifted things nicely on the taste buds in contrast to the richness of the meat and cheese. My salad of mixed leaves, cucumber, cherry tomatoes, red pepper and spring onions came dressed with a tangy French dressing that further lifted the overall experience in my mouth, as well as providing a colourful beauty for the eye to behold. I do like creamy coleslaw (but not an overly wet one!) and the one served at Barringtons is superb; better still, it comes in a separate pot so it can be devoured at will –or even popped into the sandwich itself if that’s your bag! As with His Nibs’ meal, my chips were moreish and I smiled happily as I got that gentle crunch when I bit into one. 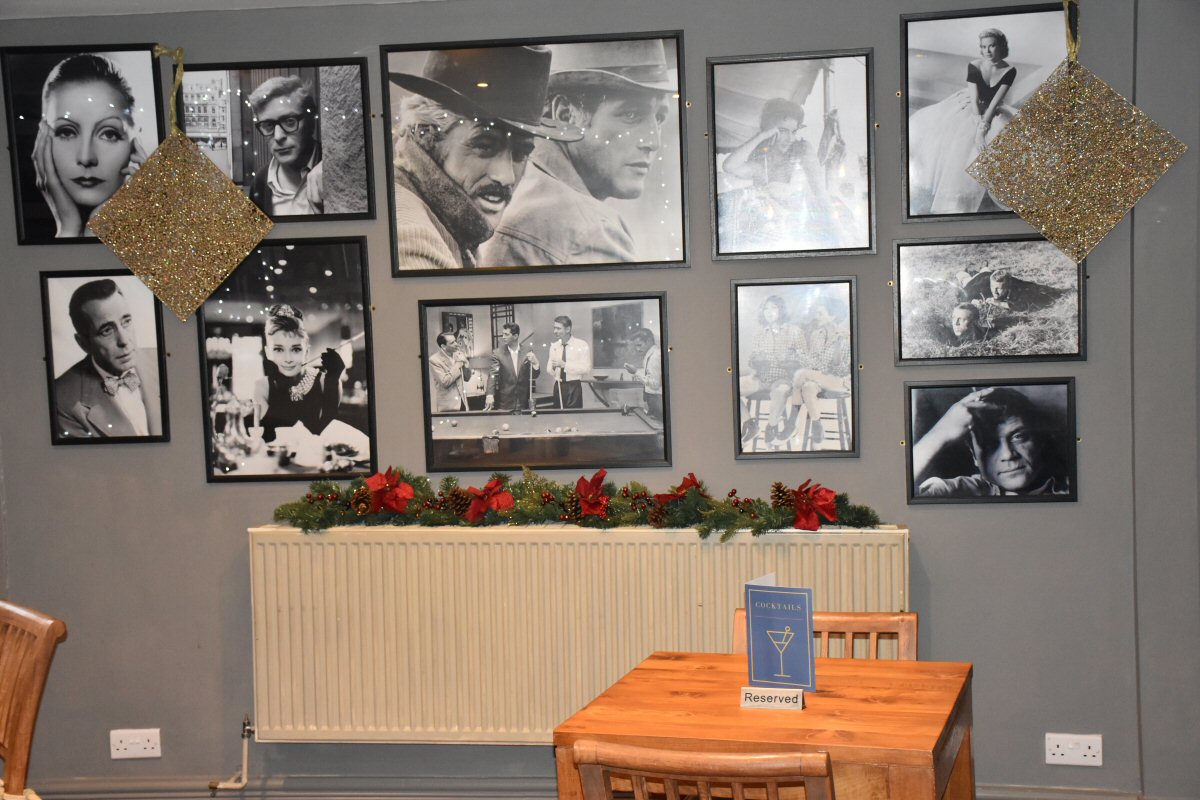 Throughout our main course we had several check backs, not only to see that we liked our meals but also to see if we wanted more drinks; I took the opportunity to have another glass of wine...well, I was on holiday! We hadn’t planned to indulge in pudding because we’d loaded the jalopy up with snacks for the evenings with our friends, but the Sticky Toffee Pudding (£5.50) and Praline Chocolate Brownie (£5) snared us in the headlights and we surrendered like proverbial rabbits. Both desserts usually come with Ice cream, but we asked if we could possibly swap this for warm Custard instead; a request that was kindly granted, thank you. 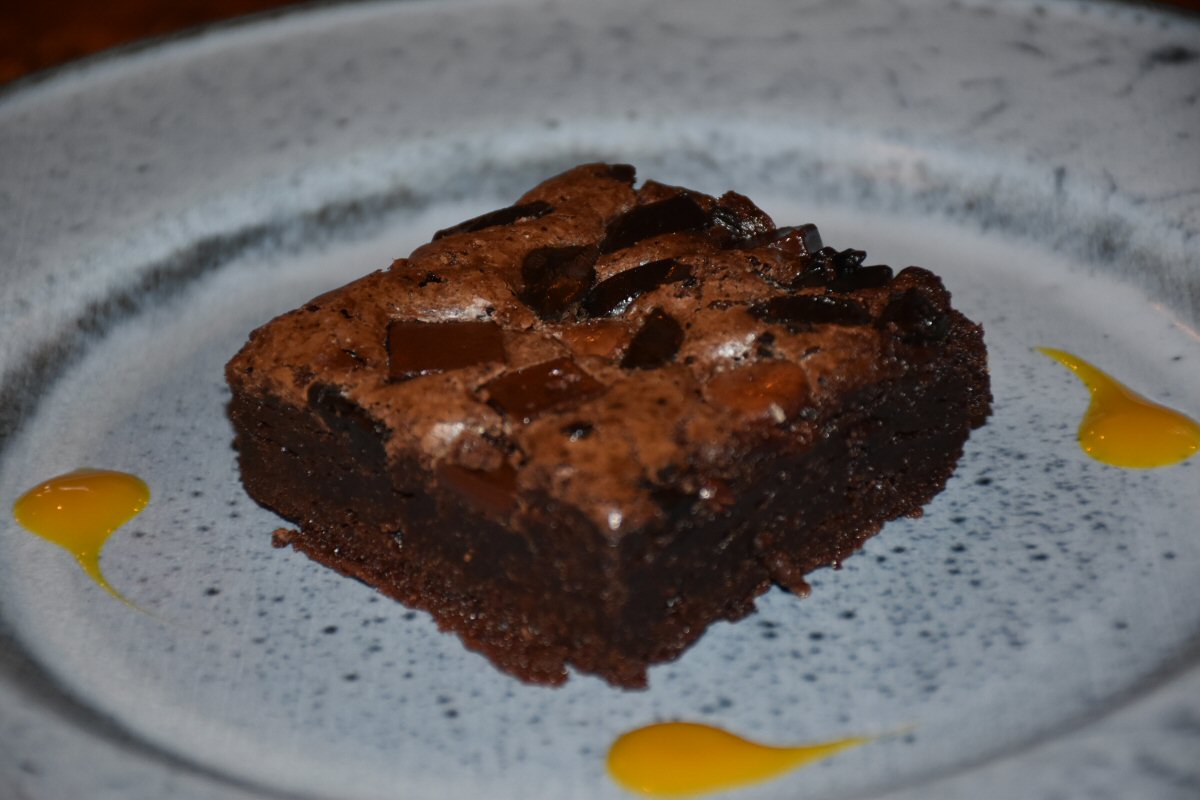 My brownie was beautifully gooey and wickedly cocoa rich – that pleasure centre in my brain was well and truly stimulated, let me tell you! There were chunks of white and dark chocolate studded throughout the milk chocolate square of yumminess and these had softened in the warming process so that they lazed on my tongue, allowing me to fully appreciate their charms. Chef serves a wonderfully creamy custard, paler in colour than many, but the paleness contrasted perfectly against the darker tones of the brownie. What I really liked though, was the consistency of the custard; it was satisfyingly thick, and clung to the insides of my cheeks, determined that I should applaud it – which I did. 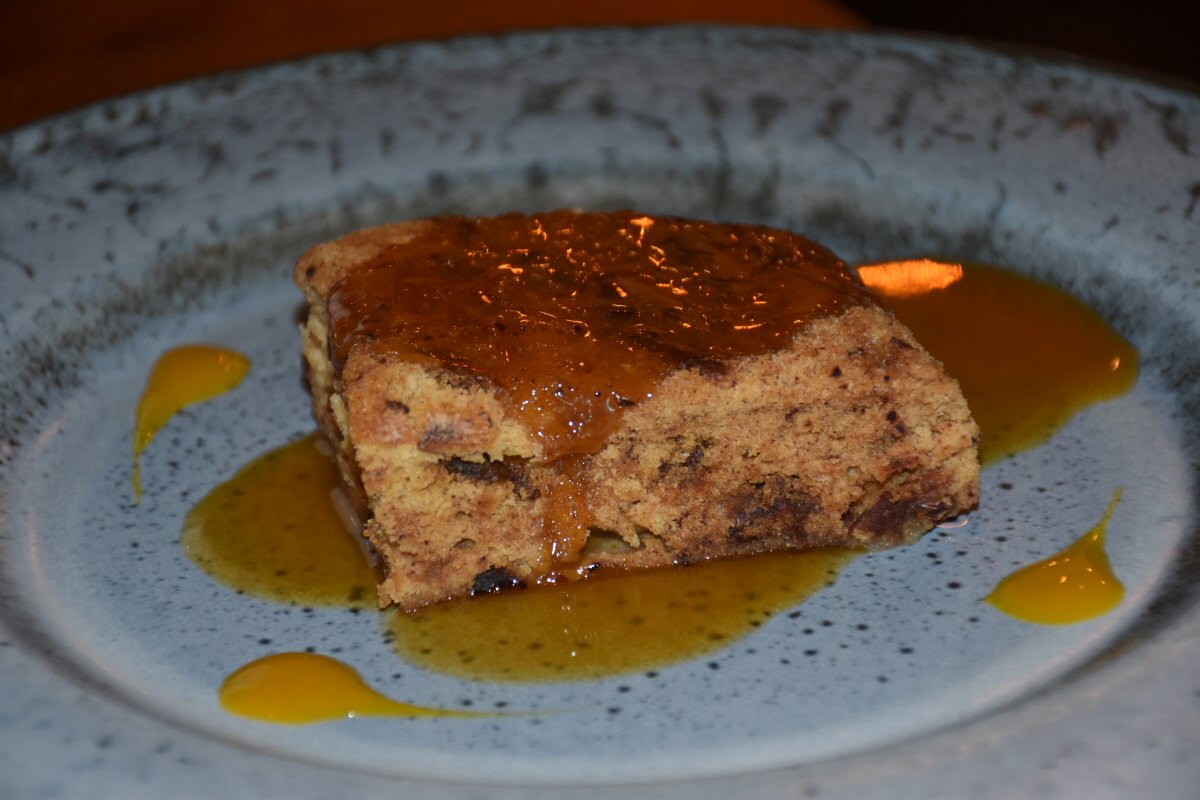 The Man Bird does like his Sticky Toffee puddings, as you all know, and this one met the standard to get approval. Although it was lighter in colour than many he’s sampled, and not as rich in taste, Chef had got an ace up his sleeve: his toffee sauce! This sauce was indulgently thick in consistency and had the most delightful rich, smoky flavour that deepened the taste experience in the mouth. There was also a good amount of the Toffee sauce to savour, so The Man Bird was exceptionally happy.

What a lunch this had been, far better than I was expecting, if I’m being honest! Not that I wasn’t expecting something good (the food had been lovely on our previous visit), but lunchtime menus aren’t renowned for setting the world on fire usually, are they? I have to say though, that I’d head to Barringtons at lunch if I was in the area again, without hesitation. Hot Wings awarded again to this super-friendly team. To book a table, call 01629 733111.