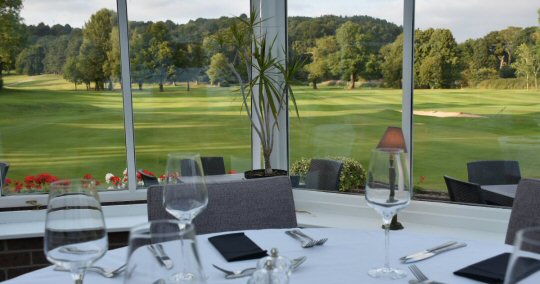 Dinner At Angelo's At Chevin Golf Club, Duffield
This Review | All Reviews

Dinner At The China Rose Chinese Restaurant in Matlock Bath

When My Daddy Bird is away, Mummy Bird (quite fairly) can’t be bothered to faff about cooking for herself, so we use it as an opportunity to go out for a Flock Meal. We’ve gadded about all over the place on previous jaunts, but fancied something a bit more in the locale, so we popped over to China Rose Chinese Restaurant in Matlock Bath. 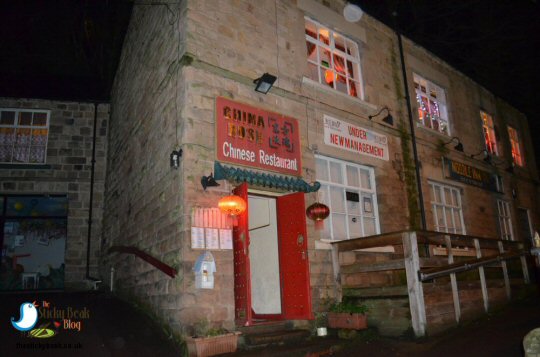 His Nibs and I have visited owner Chris’s other restaurant, Oriental Pearl in Clay Cross, so we had high hopes for this other venture of his. Mummy, Daddy, and Chickadee have been to China Rose before and enjoyed it, so there was no reason to think it wouldn’t be a lovely evening out.

The steps up to the restaurant aren’t for the faint-hearted, and they definitely aren’t friends with those of us who wear high heels! However, I persevered and made it up without incident you’ll be pleased to know.

If you like Chinoiserie, you will absolutely adore the interior of China Rose in Matlock Bath; everywhere you look there’s lanterns and red patterned silk. I particularly liked the chairs with their silk upholstery and the tassels at each corner – the tassels also featured on the ceiling pendant lights too. Perhaps the most eye-catching feature of the premises though is the huge wall mural at the end of the restaurant with its own writhing dragon; it’s just stunning! 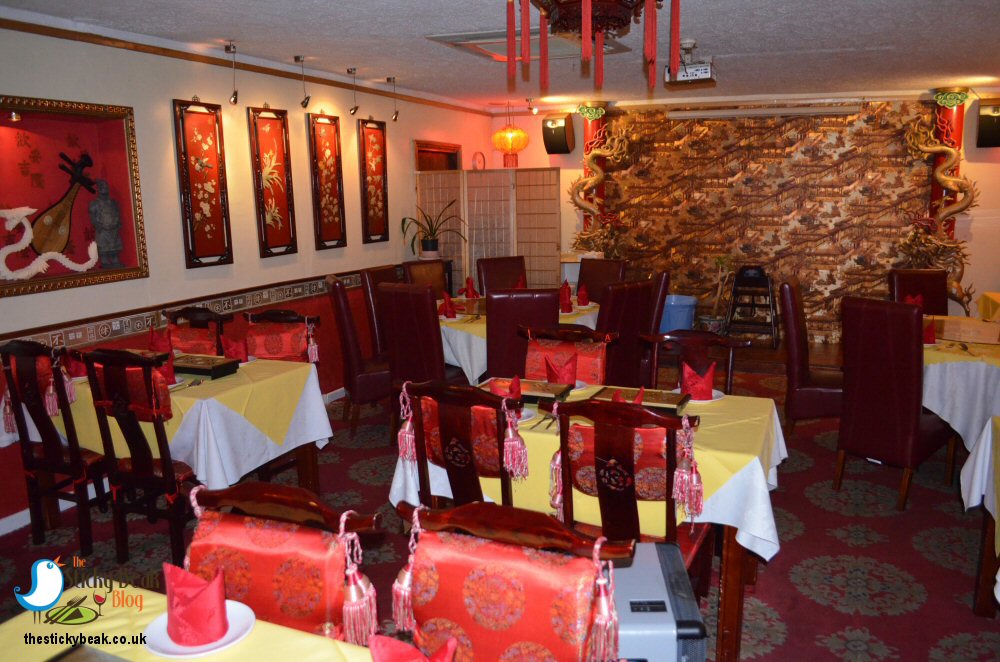 The Man Bird ordered a bottle of Tsing Tao lager, Mummy and I shared a bottle of Pinot, and Chickadee had good old council pop (water). A lovely young lady popped a bowl of Prawn Crackers on the table for us all to nibble at whilst we studied the extensive menu.

David was at the helm as usual and was showing a young lad called Will the ropes; it was only Wills’ second shift at China Rose, bless him. His first lesson was how to pour the drinks for customers, so David poured The Man’s lager, explaining the process as he did so. I have to say, Will was such a lovely polite young lad; I hope he settles in well and other people get the pleasure of his smile. 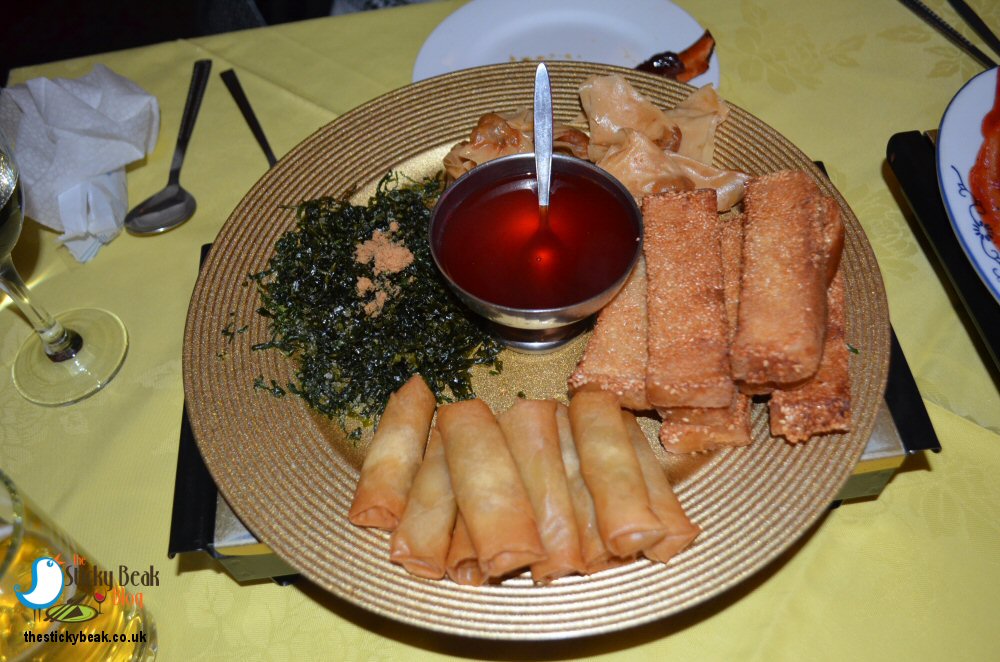 To get the evening started, we ordered two sets of the Mixed Hors D’Hoeuvres (this platter is for 2 to share). This platter is made up of a selection of popular Chinese starters including Sesame Prawn Toast, Cantonese Spring Rolls, Peking Spare Ribs, Chicken Satay Skewers, Crispy Wanton, and Crispy Seaweed. A sweet and Sour dipping sauce also comes with this selection.

The Peking ribs were lovely and large in size with plenty of meat on them and a fabulously sticky coating that had us all licking our fingers clean afterwards! Meaty Prawn toasts were nice and satisfying with that gorgeous nuttiness from the Sesame seeds that adorned them. 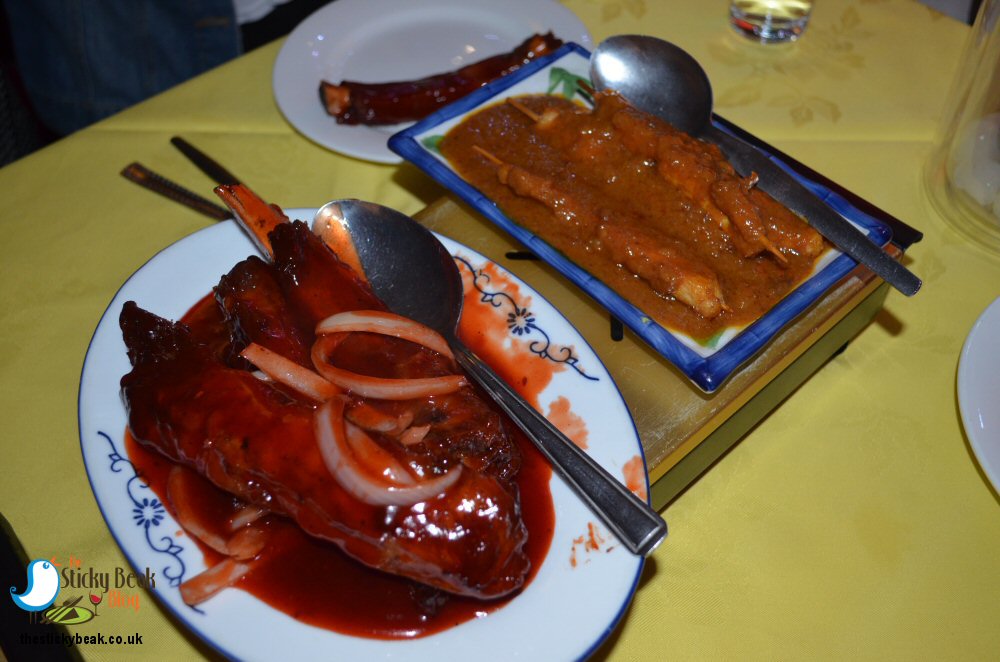 His Nibs has, as you know, been getting rather more adventurous of late and he decided that he was going to try the Satay skewers with the Satay sauce on them – not scraped off as is his norm. Fortune favours the brave they say and his daring paid dividends as he discovered that the spicy peanut sauce at China Rose is rather yummy! Chickadee and I quickly scooped up the remaining Satay sauce, before The Man could avail himself of it further; nothing is sacred anymore it would seem (except Mushrooms!).

Without exception, all the platter items were superb, and it didn’t take long for us to polish them off! Our flock typically orders the soup course when dining out at a Chinese restaurant, and we saw no reason not to do so on this evening. Two portions of Chicken and Sweetcorn, 1 order of Crab meat and Sweetcorn and 1 portion of Chicken Noodle soup were soon winging their way over to us and a silence once again descended on our table as we all tucked in to the steaming bowls of liquid deliciousness. 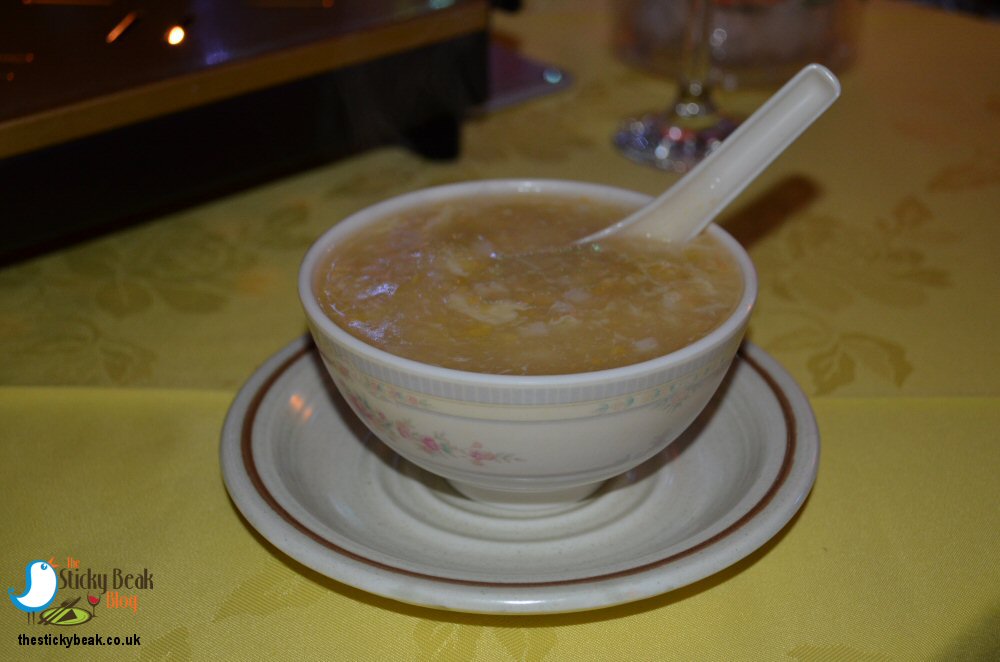 When we’d finished, David gave Will another lesson on how to efficiently clear a table in one go; I was taking note myself, and picked up a couple of handy hints. After a refresh of cutlery and clearing away the wet hand towels that we’d used, David came and took further drinks orders from us and ensured that we were having a good time. China Rose sets its tables with western cutlery, but you can request chop sticks if you prefer to use them.

For our main courses we had House Special Chow Mein (Mummy Bird just loves it), King Prawn Satay (anything with King Prawns in has The Chicks’ name on!), Deep Fried Squid Salt and Pepper for His Nibs, and Scallops with Ginger and Spring Onion was my choice. To make things easy we just ordered a bowl of rice for 3 people, figuring we could order extra portions if needed. 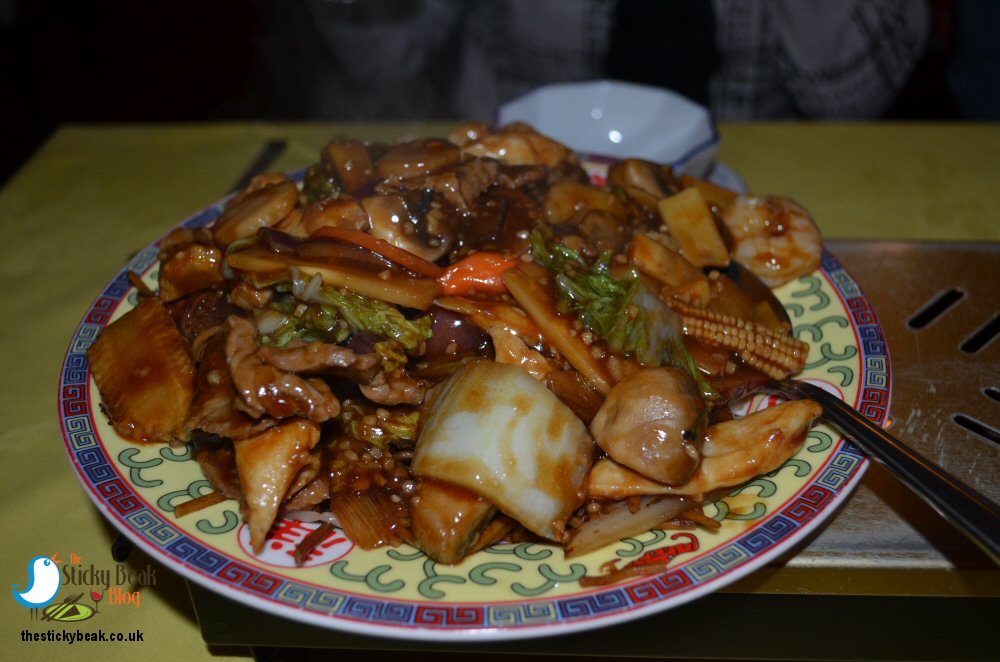 Chef at China Rose runs a tight ship and despite there being a fast flow of take-away orders to fulfil, we weren’t waiting long for our food to arrive – and it was piping hot when it came. Our flock all have good appetites – and I’m being polite here! – but we struggled to finish our meals, the portions were really generous. 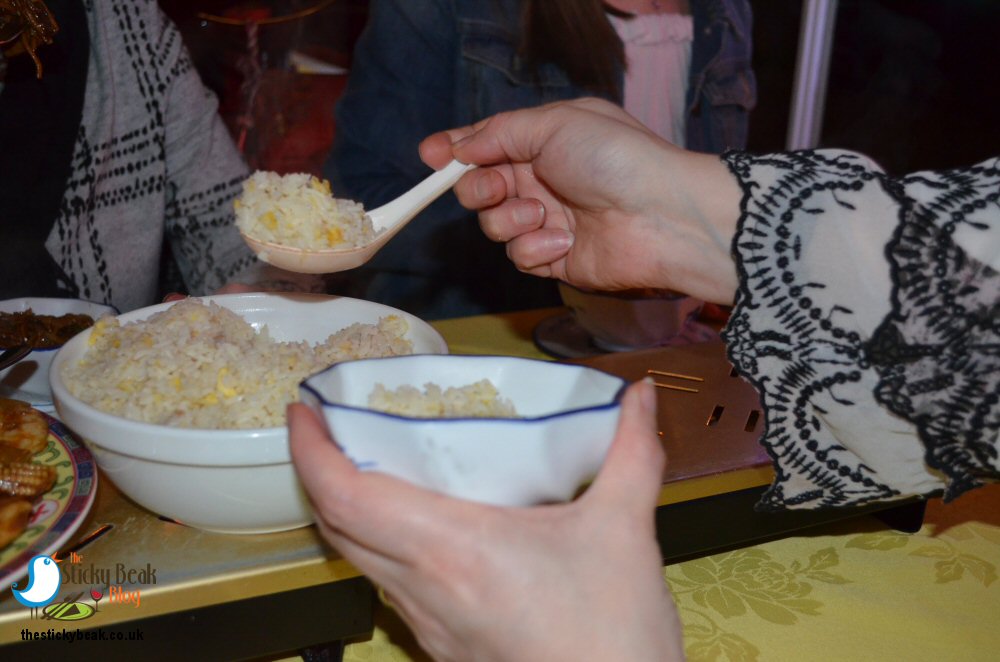 The Squid was lovely and soft thanks to the skilful cooking of it, and a great crispy coating surrounded each ring. My Scallops were beautifully juicy and fragrant and the fresh Ginger was fantastically bright on the palate; I loved the crunch of the Spring Onion in this dish too. Mummy Bird was steadily chomping her way through the variety of meats in her Chow Mein, saying how nice each one was. 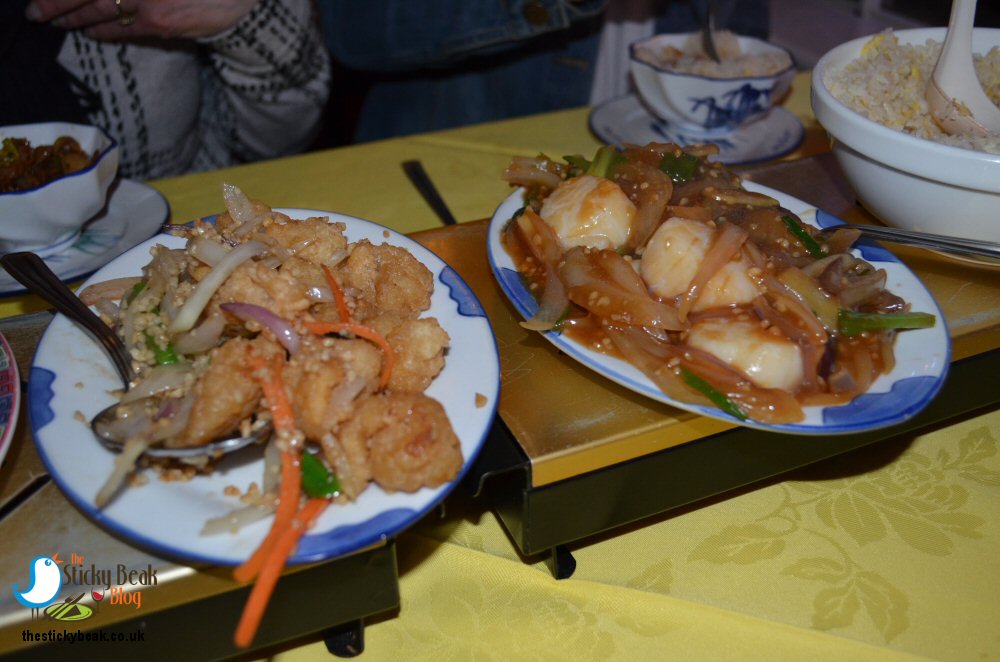 We don’t have an abundance of decorum at times, and on this occasion there was more than the odd episode of pinching of food from other peoples’ bowls (not plates, that’s a WHOLE other level of unmannerliness). In fairness and recognition of the team effort we’d made to clear through the food mountain, all that remained was some noodles; not a bad showing we thought.

It isn’t often that we pass up the chance of pudding, but none of us could muster up the strength to face any more food! We did manage to have a couple of Baileys on ice though and a round of coffees, so we didn’t completely wimp out!  If you haven’t been to China Rose in Matlock Bath before, it’s well worth a visit.

Hot Wings given to this lovely venue; remember to take your appetite with you when you go – you have been warned!