Dinner At The White Hart, Bargate

Well dear reader the Boy Wonder and I had an opportunity to have a night out sans Chick, so we took it. He had a scan round on Groupon and found a voucher for two at a venue we hadn’t visited before, so he booked the table (luckily the voucher is valid Tuesday, Wednesday and Thursday). There is ample car parking at the side of the Pub so we only had a short hop into the premises. The White Hart has a lovely Country pub feel to it with its decor in creams and pale greens. There is an original stone fireplace down one end of the pub and an open brickwork fireplace the other, and feature beams on the ceilings. There are garlands of dried Hops strewn around which adds to the country feel of the rooms. The tables themselves have their legs made from the metal foot pedals of original Singer Sewing Machines, which I thought was a great feature.

The staff greeted us with a warm smile and Hello, and showed us to our table. A large family group were already in when we arrived, as well as another couple, and it wasn’t long before another couple of groups arrived too. Everywhere was spotlessly clean, including the hygiene facilities as I discovered when I needed to visit the girls’ room. 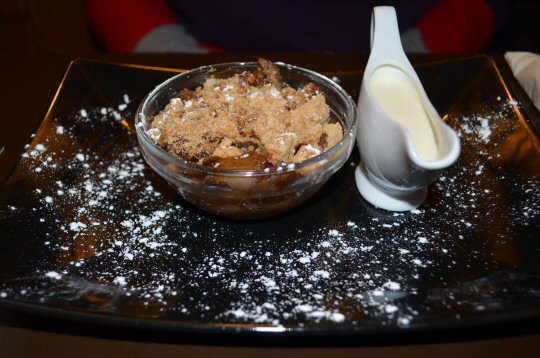 The Menu is pleasingly varied, with plenty of choice for meat eaters and vegetarians alike across all the courses. I was tempted by the Fried Whitebait (for which there is an additional £1 charge if you use the Groupon deal), but in the end we decided to play nicely and share a Bread Board Platter. Thick slices of Date and Walnut, Cheesy topped Tiger and Sourdough Breads were accompanied by little pots of lightly softened Butter, Olive Oil and Balsamic Vinegar, and was simply presented on a natural Wooden Platter. The bread had been warmed and we tucked in with our usual gusto. 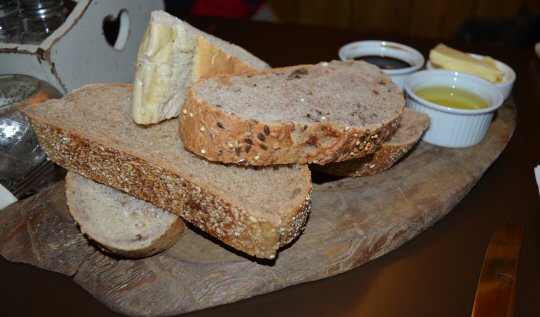 I chose the Ribeye Steak for my main course and the Man Bird went for The White Hart Burger (which surprised me as I really thought he would go for The Steak and Ale Pie). My Steak was lovely and tasty as you would expect from a Ribeye as they have a nice vein of fat with them that gives them a beautiful taste and moisture whilst being cooked. The accompanying Onion rings were homemade and freshly done with an excellent crispy light batter coating on them. My large Field mushroom hadn’t been over-cooked either so it retained its natural texture, but was pleasingly hot temperature-wise. To me, chips are the make-or-breaker of any Steak meal and I’m delighted to report that the Home made chips were very tasty and thick -  they were nice and soft ( but in no way greasy ), what I would call  “ comfort “ chips. A Cucumber and Mixed leaf Salad was presented in a separate little glass dish. I took great pleasure in cleaning my plate I can tell you. The Boy Wonder was equally pleased with his choice. The Burger itself is a sizeable 8oz, solid meaty affair topped with melted Mature Cheddar Cheese, which made the mouth water as it came to the table. Rather than a normal roll the burger at The White Hart comes in a Ciabatta Roll, again with the salad in a separate dish. Both meals were piping hot and good size portions. 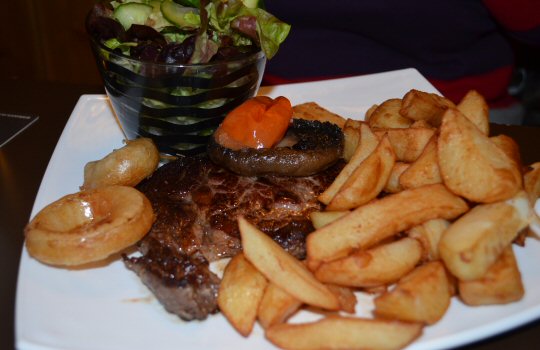 The Dessert Board had, unsurprisingly, caught my eye as we first walked into the pub so I had a fair idea as to what my final course would be! When my Plum and Port Crumble was placed before me I could hardly wait to tuck in it looked so good. The Plum slices had been cooked in port, but still retained their natural firmness rather than disintegrating into a sloppy mush and then these were topped with chunks of homemade Crumble which is a little different to the usual way of presentation. The Pouring Cream came in a dinky jug on the side allowing you to add as much or as little as you wish. His Nibs had a Mixed Berry Eton Mess which was served in a tall Glass on a Slate dusted with Icing Sugar. There were Berries in abundance with lovely chunks of Meringue enveloped in a light fluffy cream that had a hint of fruit taste to it. I thought I was going to have to stop him licking the glass clean, he enjoyed it that much.

After such an enjoyable meal we just fancied a coffee to round things off. Our waitress said that they only did instant coffee. When it came (in Denby Pottery mugs) it was a good quality instant coffee, and let’s not forget we’re in a Village Pub not a trendy city cafe or Michelin starred restaurant, so it more than sufficed.

We had a great night in lovely cosy surroundings, and the staff never lost their cool or professionalism even when things got busy with the arrival of the Darts Team. For good honest food at decent prices with friendly service you could do an awful lot worse than come here. Well Done Team White Hart, you’ve earned your Sticky Beak Wings J