Life is all about balance, right? Detox + retox = balance, therefore, so after a hard morning (!) relaxing in the luxurious surroundings of Spa at Ye Olde Bell Hotel in Barnby Moor it made sense to retox/ refuel in The Herb Garden Brasserie. You don’t have to be a Spa guest to enjoy the excellent cuisine though, it is now open to the general public!

The menu changes seasonally, allowing Head Chef Richard Allen to bring Spa guests the tastiest, freshest dishes possible. Now Richard is my kind of guy, because as well as offering healthy choices (brilliantly named the “dip your toe in the water” options) and mildly indulgent dishes (“come on in, the water’s lovely”), Richard has devised a totally full-on gastro selection too: “Dive in, why don’t you?”. The beauty of this trio of options is that you can mix-and-match between them to create your absolute dream meal whilst you’re having some pamper time. Two courses are included in the price of your Spa experience as standard, and you can add a third course for £8 per person if you fancy. If you are just popping in to dine, but not a guest at the Spa, the price is £28 per person for two courses and an additional £8 per person for a third course. 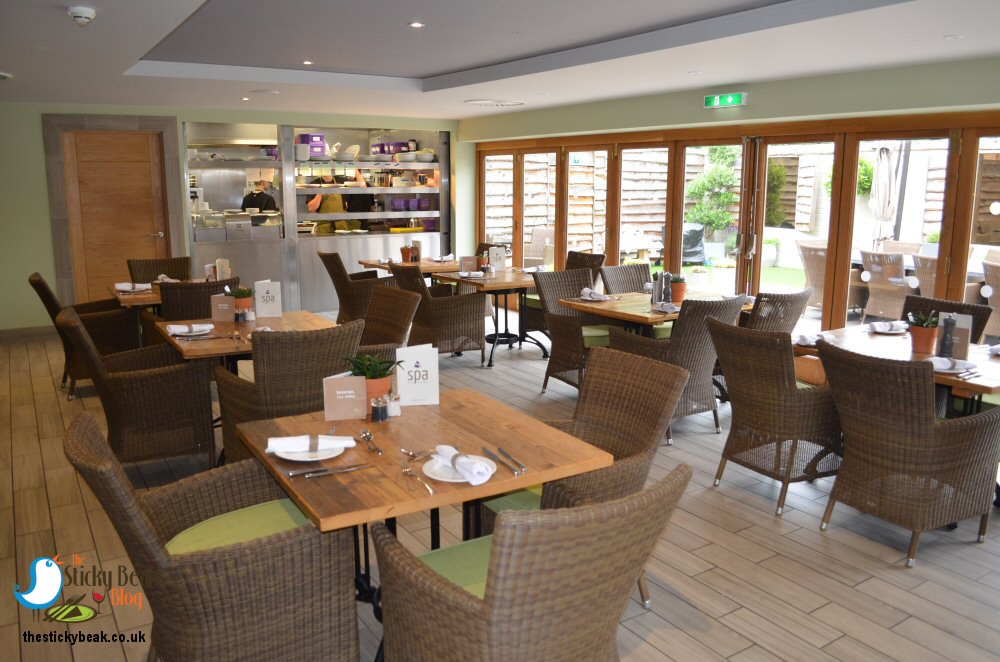 I understand why folks opt for healthier, lighter meals at a Spa – especially if they’re having a full day there -  and Lord knows I applaud their self-control, but let’s face it, it was never going to happen here was it, really?! Both The Man Bird and I dived straight in, choosing Treacle cured Salmon, Goats’ Cheeses Curd, and Beetroot Emulsion (my choice) and Spiced Duck Terrine with Parsnip purée, crisp Focaccia, and Apricot Gel (His Nibs’ choice) for starters. Main courses were Lemon and Thyme Chicken with Roast Root Vegetables, Fondant Potato, and pan jus, and Smoked Pancetta-wrapped Pork Fillet with Sage & Onion purée, Grain Mustard mash, and Cider jus, for me and Him Indoors respectively. The Herb Garden Brasserie has a wonderful relaxing feel to it, overlooking the outdoor terrace area of the main Spa. Rattan furniture and pale tiled floors maximise the natural light available and the whole space just has a superb spacious feel to it. Yet again Jerry was being host-with-the-most as he served us a platter of freshly baked bread and churned butter that had been scattered with salt flakes and fresh Thyme leaves for taste. 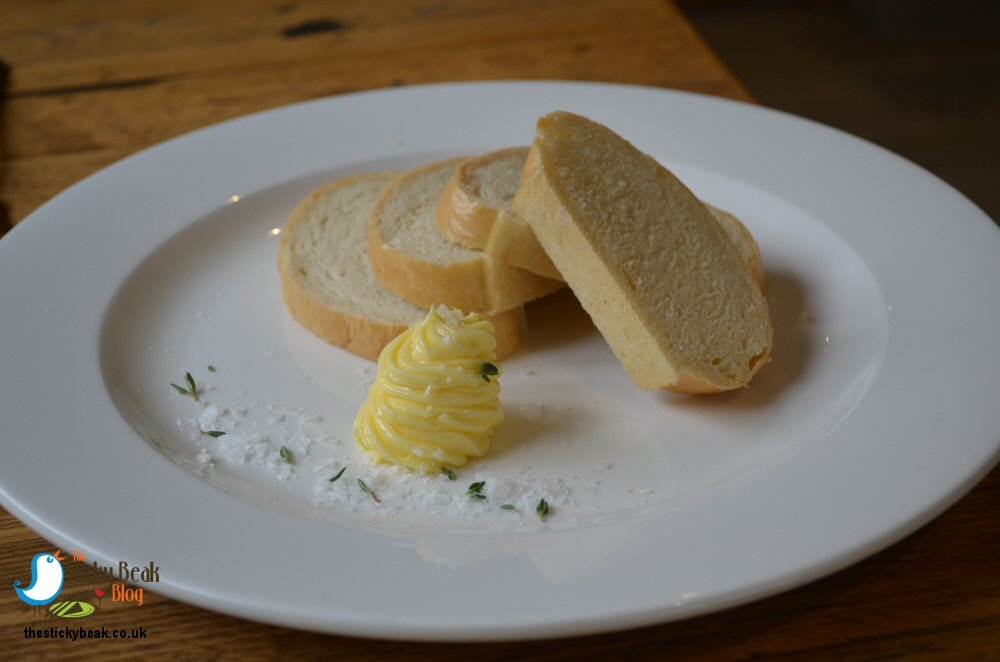 We could see the hive of activity in the kitchen, thanks to it being open and located at the end of the Brasserie; the smells coming from it were divine! It wasn’t long before our starters were being checked on the pass before being given to Jerry to bring out to us.

The Salmon had been fashioned into rolls and had a wonderful Treacle hint to its flesh that worked well with its natural flavour. Dark Treacle and ruby-hued Beetroot puree had been dramatically swirled for artistic effect around the dish, and between their undulations were arrangements of Beetroot topped with fresh, tangy Goats’ Cheese.  The cheeses’ tangy character was tempered by the earthy notes of the Beetroot, and the rich, smoky Treacle with its intense sweet edge. Verdant pea shoots and tiny, snow-white pea flowers garnished the dish beautifully, as well as adding crunch to this magnificent starter. 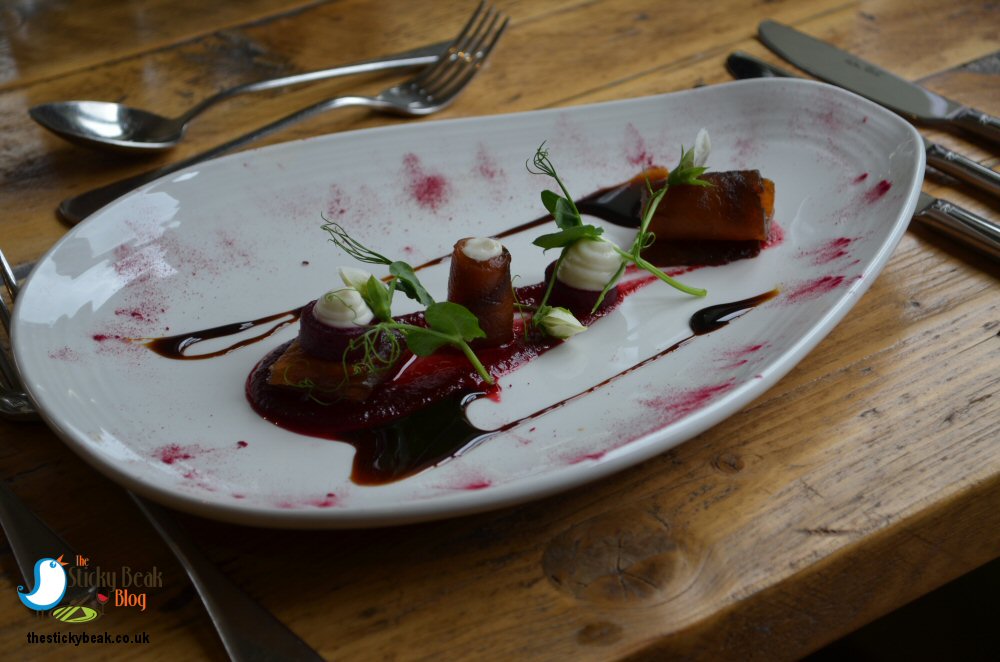 His Nibs’ Spiced Duck Terrine was also presented very nicely. The coarsely chopped Duck Meat had been shaped into small rounds, each one dotted with Apricot purée and arranged at regular intervals within the plates’ perimeter. When something is as intensely flavoured as this Terrine, you really don’t need an awful lot of it to get its full effect; this was a definite example of a dish being “small but mighty”. The perfectly seasoned Focaccia was indeed crispy and provided a great medium on which to place the Terrine and puree before popping it into your mouth. As with my dish, crunchy, colourful pea shoots gave visual interest and more texture too. 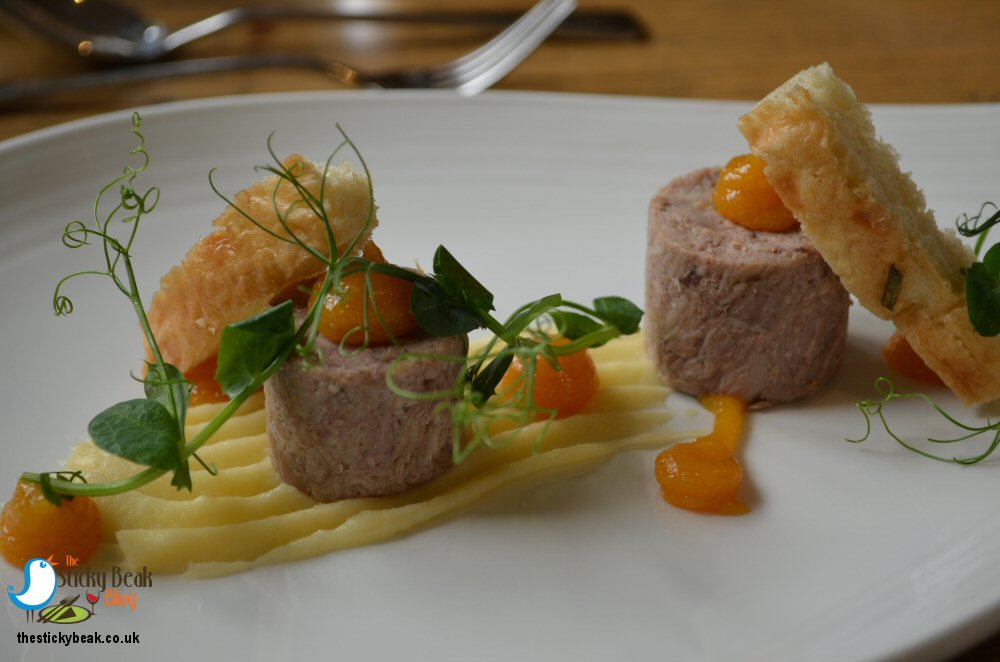 Jerry had been to check that we were happy with our food, and when he came back again was rewarded with the sight of two clean plates, making him smile happily. We also commented on his wine recommendations too, saying they were spot-on. The lunch menu helpfully has wine pairing suggestions on it too, so you can get the most from your gastro experience at The Herb Garden Brasserie. Jerry trotted back to the kitchen, and we awaited our next course with excitement.

My Lemon and Thyme Chicken was carefully presented and I took a moment to savour its beauty before I tucked in. The half Chicken was served as separate breast and leg sections, each having its skin still insitu and scattered with herbs and seasoning. As I took my first mouthful I sighed in happiness at its moistness and flavour, and the Lemon and Thyme notes whispered on my palate, light and full of summer promise. I was impressed by the gentle sweetness of the roasted root vegetables: Carrot, Swede, and Parsnip had all been cut into sloping wedges before being slowly roasted to enhance their natural sugars. A perfect circle of Fondant Potato had been cooked to give it a light crispness on its outer without drying it out, and inside the layers were that flawless balance of firm and soft. Around the plate was a delicate stream of concentrated taste from the pan jus, which not only tasted good but drew the eye along the plate to take in all the elements of the dish. 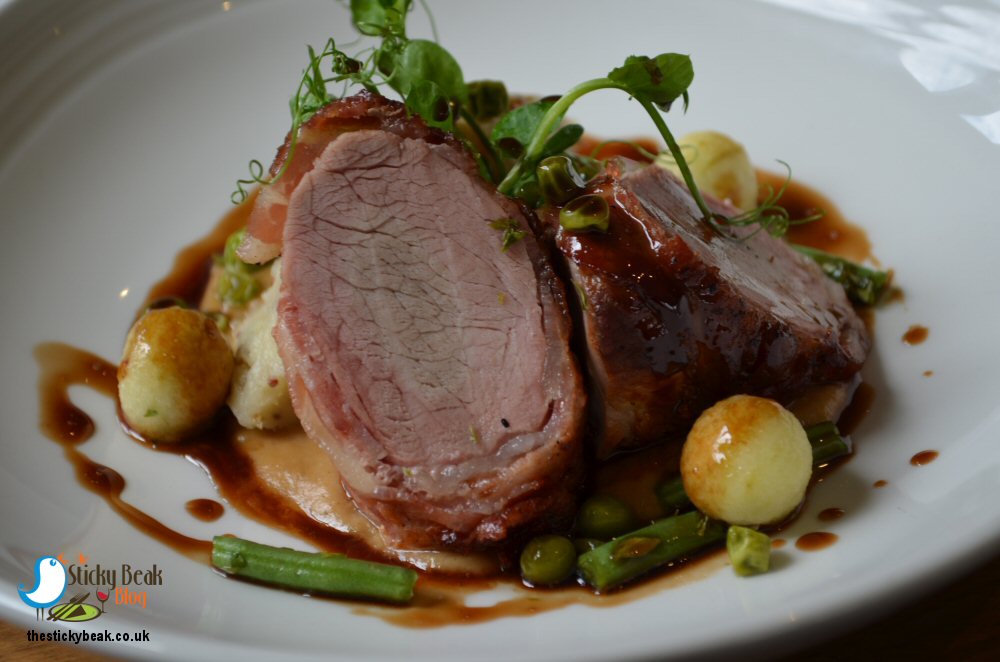 The Man Birds’ main course was just as hearty as my half Chicken had been; he was presented with a pair of huge pieces of Pork Fillet, both carefully wrapped in gorgeously smoky Pancetta slices. As well as imparting its own distinct flavour, the Pancetta had preserved the moistness of the Pork meat – a job that it had done jolly well! His Nibs was blown away by the juiciness of the Pork as well as its deliciously creamy taste; the meat just melted in his mouth. Sage, Onion, and Cider are all natural bed-fellows where Pork is concerned and each played its part perfectly in this creation; the Sage and Onion purée was light-yet-deep in flavour and the Cider jus added a great fruitiness to the dish. There was a little kick in this meal too, coming from the wholegrain Mustard in the glass-smooth mash; you got a distinct heat in the mouth, but not too much.

Yet again, Jerry had been a star as he moved around the room checking that all his guests were happy and whisking plates stealthily away as and when needed. As if by magic, he appeared at our table to enquire whether we’d like pudding; given the standard of the food so far, there was no way I was passing up the chance to try Chef Richard Allen’s sweet treats!

The weather had cooled slightly and the clouds were becoming thicker, so I was pleased that we’d opted to stay inside the brasserie to eat rather than go into the garden just behind. If you go on a sunnier day though, do take advantage of the opportunity for some al fresco dining – it’s a lovely little garden area. 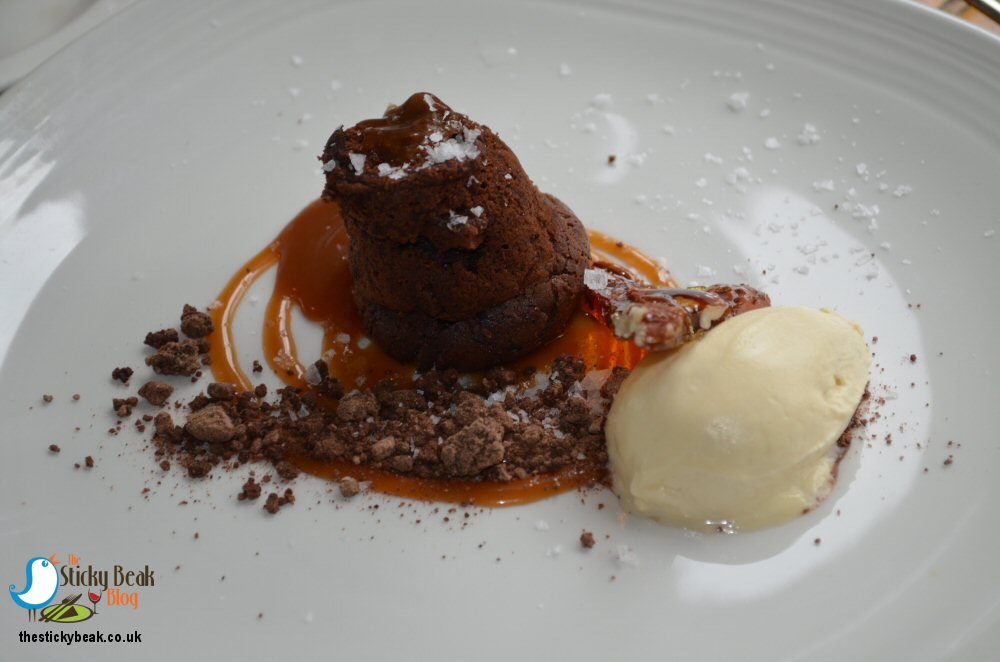 I had chosen the Salted Caramel Hot Chocolate Fondant with Irish Cream Mousse and Coffee Crumb praline for my pudding, and The Man had the Strawberry Cheesecake with Shortbread biscuit and White Chocolate crisp.

I have to admit that my gluttony took over when I clapped eyes on my dessert; my initial thought was “is that it?”, but I really should know better than to question an AA Rosette winning Chef’s wisdom! The reason for the Fondants dinkiness was the fact that its taste was inversely proportional to its size; refer to previous small-but-mighty comment! Talk about intensity and richness in a dessert, this was joyous to eat. In contrast, the Irish Cream Mousse was light and elegant with a gentle alcohol hint. Salted Caramel sauce had also been swirled in ribbons around the plate and Pecan brittle and pieces of Coffee crumb Praline completed the rota of deliciousness.

The Man Bird’s Strawberry Cheesecake was the epitome of summer with its rose colour and fresh, bouncy fruit taste. An artistic fan of fresh Strawberries covered the top of His Nibs’ choice, as well as pieces of zingy, micro-proportioned Lemon Balm herb. You can’t beat the combination of light cheesecake and a crumbly shortbread biscuit base, and this was utterly sublime! The base melted instantly in the mouth releasing its buttery richness, and the light cheesecake was like a cloud too. Silky white chocolate added a final flourish of glory to this classic dessert. 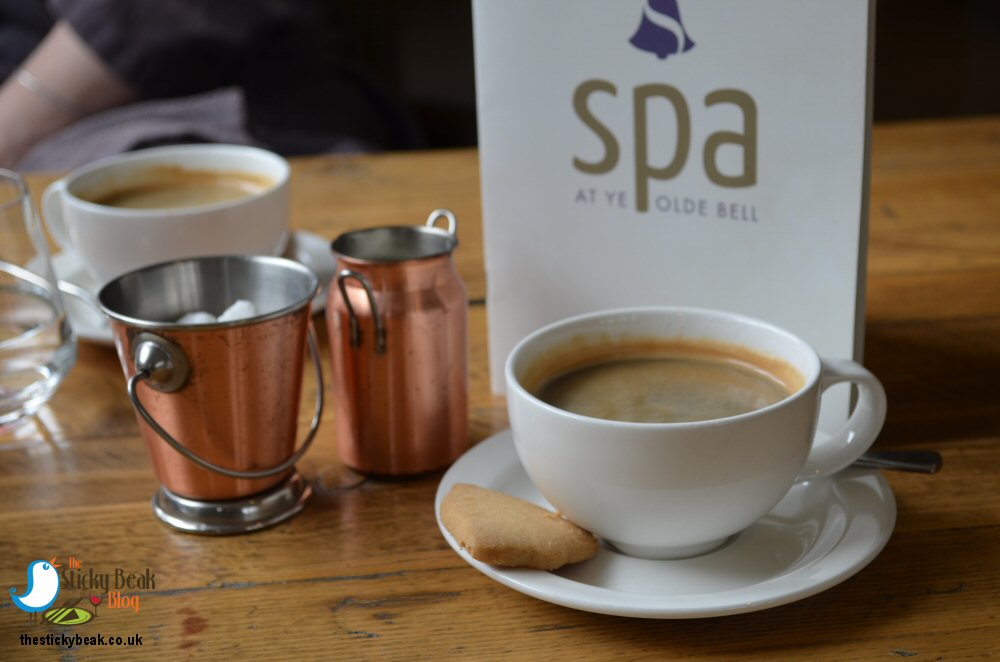 Our customary end to the meal (black coffees) came with mini bell-shaped shortbread biscuits that were still warm! Gosh, they were marvellous let me tell you. This was one of those days that you wish would never end – both the Spa bit and the food bit! - but it was sadly time for us to go and get into our “normal” clothes and return to the nest. Never have I wanted to see Doc and his DeLorean more in my life! Hot Wings awarded to Chef Richard Allen and his team at The Herb Garden Brasserie at the Spa at Ye Old Bell Hotel, Barnby Moor.

Read About Our SPA Day At Ye Old Bell Hotel