A Birthday Dinner At The Lion Hotel In Belper

We are, as you know, a very sociable little flock. Life often overtakes us all, or rather hectic work schedules make getting together hard at times! A little forward planning, a.k.a blocking out The Man Birds’ birthday months in advance, paid dividends however; we all (Tribal Elders included) made it to our arranged meal at The Lion Hotel in Belper. Never mind Cinderella and her ball; it was all about His Nibs and his birthday celebrations!

The Lion Hotel has its own private car park available for residents and customers of the restaurant to use, so we didn’t have to walk far at all. We females were happy that our heels weren’t going to get wrecked by a long trek up-hill-and-down-dale.

The interior is very nice and welcoming, and Mummy Bird and I were very taken with a pair of striking striped high back chairs in reception. We’d got a table booked in the bar area, as it’s a little more accessible for my Daddy Bird - he’s got a poorly knee at the moment, bless him. Our table was located window-side, so the perfect spot to indulge in some people watching. 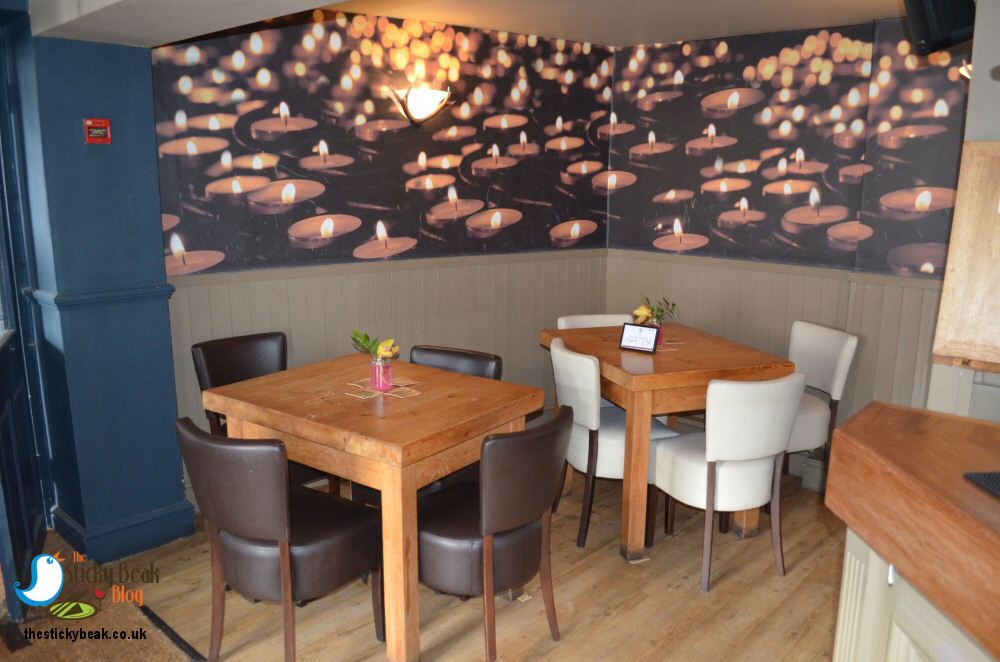 Having got the drinks ordered, we all turned our gaze to the menu and the specials of the day that were on a separate sheet. Our lovely server brought out a jug of iced water for the table too, which is always much appreciated by this flock. Soup of the day was Sweet Potato and this just tickled my Daddy Birds’ fancy, so that was him easily sorted. The Boy Wonder and The Chick did their usual trick of changing their minds umpteen times between their perennial favourites and another option, before sticking with their faves; Prawn Pil Pil for Chickadee, Chicken Liver Pâté for Him Indoors!  I fancied the Crispy Duck Leg, and Mummy Bird really went off-piste (for her, anyway) and had Halloumi Saag. 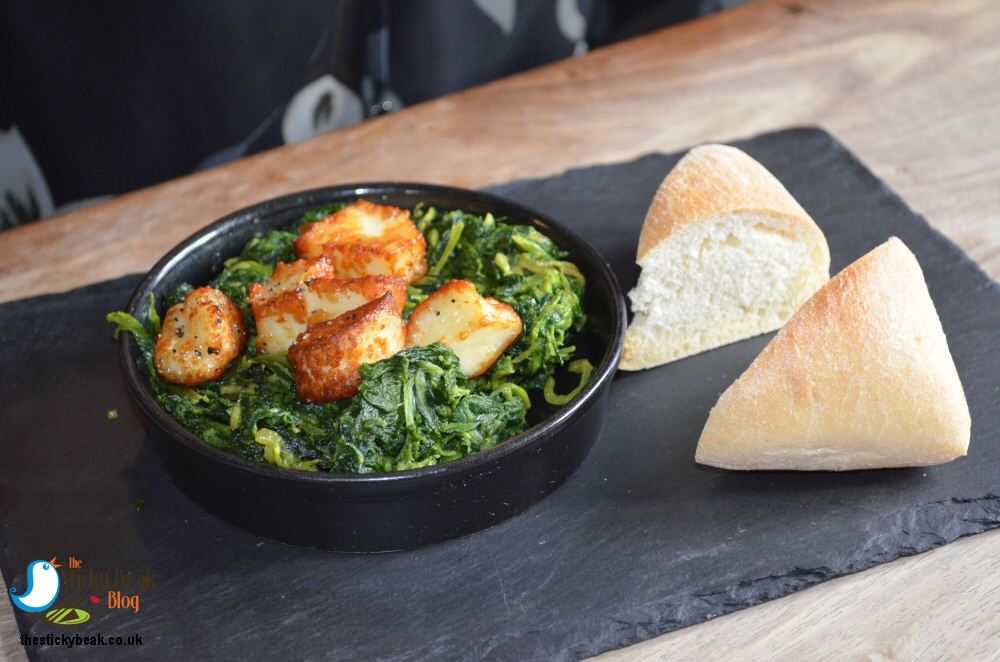 All the starters were good sized portions, especially the soup; Daddy Bird said that his bowl was swimming pool depth! Thankfully, the soup contained within was very tasty, so it wasn’t a struggle to have to eat it! Chickadee’s prawns were nice and juicy and had been cooked in a zingy combination of garlic and chilli oil. There was a good wedge of Ciabatta to mop up the oil and the Cherry tomatoes that had also been softened in it. 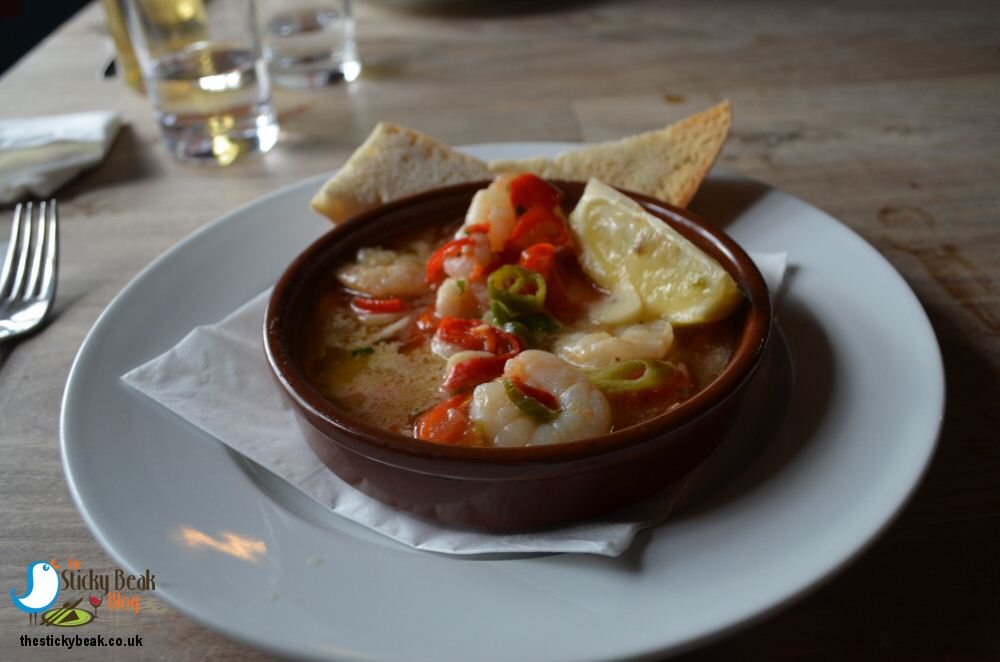 His Nibs passed his pickled Mushrooms over to me; he is getting more adventurous in his tastes, but “slugs” will always remain a step too far; luckily, I absolutely love mushrooms in any guise, so I was more than happy to scoff them. Jolly nice they were too. The Chicken Liver Pâté didn’t go begging - that soon got wolfed down along with the toasted sourdough he’d slathered it on! 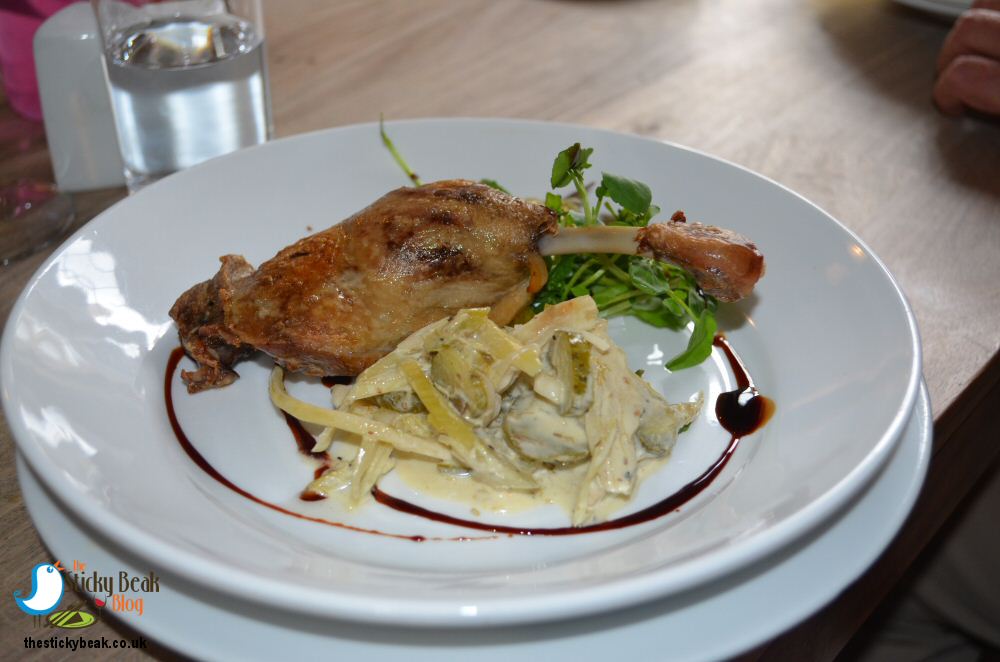 My Duck Leg was a mini-beast with plenty of succulent, flavoursome meat on it. The Orange and Watercress salad it came with was wonderfully vibrant on the palate, and the tart note of balsamic shone through from the red wine reduction it was part of. 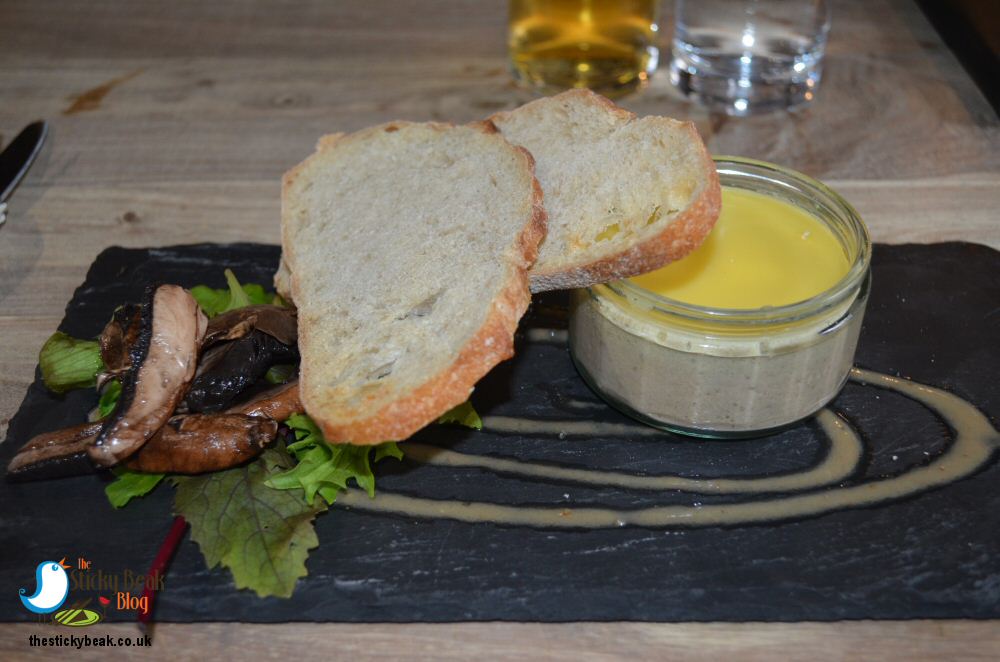 Across the table from me, My Mummy Bird had surprised us all by choosing the Cumin spiced Spinach and Honey roasted Halloumi combo that comprised the Halloumi Saag; I wondered if it was going to be a bit too lively for her taste buds. Turns out I needn’t have worried. Not a scrap was left!

It wasn’t too much of a wait for our mains; the usual time you would expect to pass when food is being cooked fresh. Whilst we waited we did what our flock does best – flapped our gums! Our mains arrived in a flurry of amazing smells, and we eagerly waited for them to be placed before us and tucked straight in. 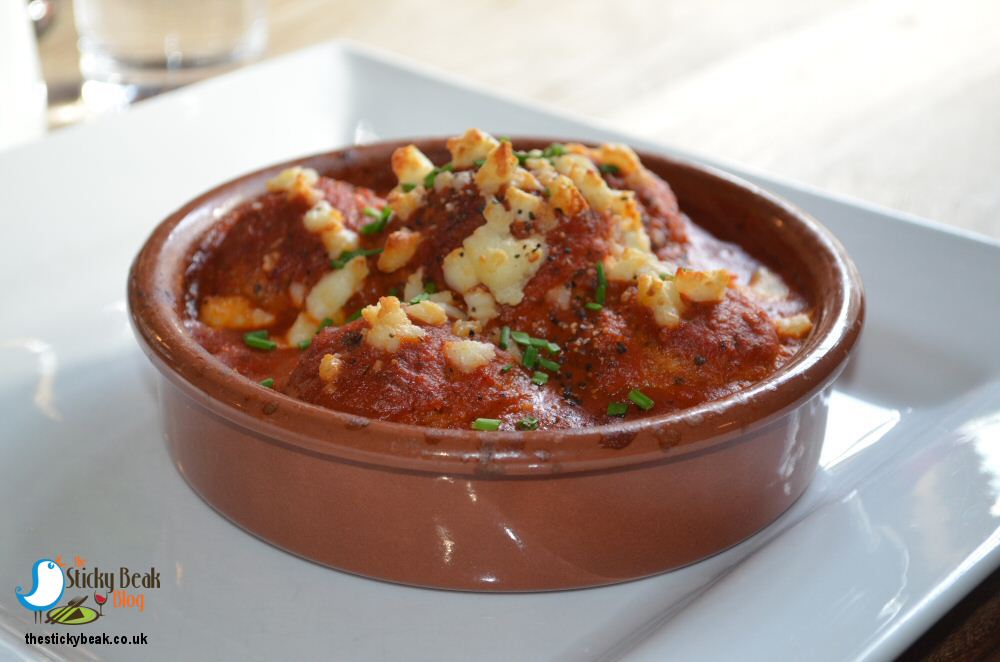 I had chosen the baked Chickpea and Halloumi balls in spicy Tomato sauce; this is normally served with Linguine or crusty bread, but I asked to swap for a side salad. The balls had lovely crisp outers and were beautifully seasoned, they were absolutely delicious; I was a totally smitten kitten with the bouncy sauce too, it was really robust on the palate. My Chick had gone for a Pasta dish, as is her wont, this time it was a mushroom Penne Carbonara. The penne was cooked perfectly according to her, and she loved the garlic bread – I quote “it isn’t wishy-washy; you can actually taste the garlic”. Praise indeed from a teen! 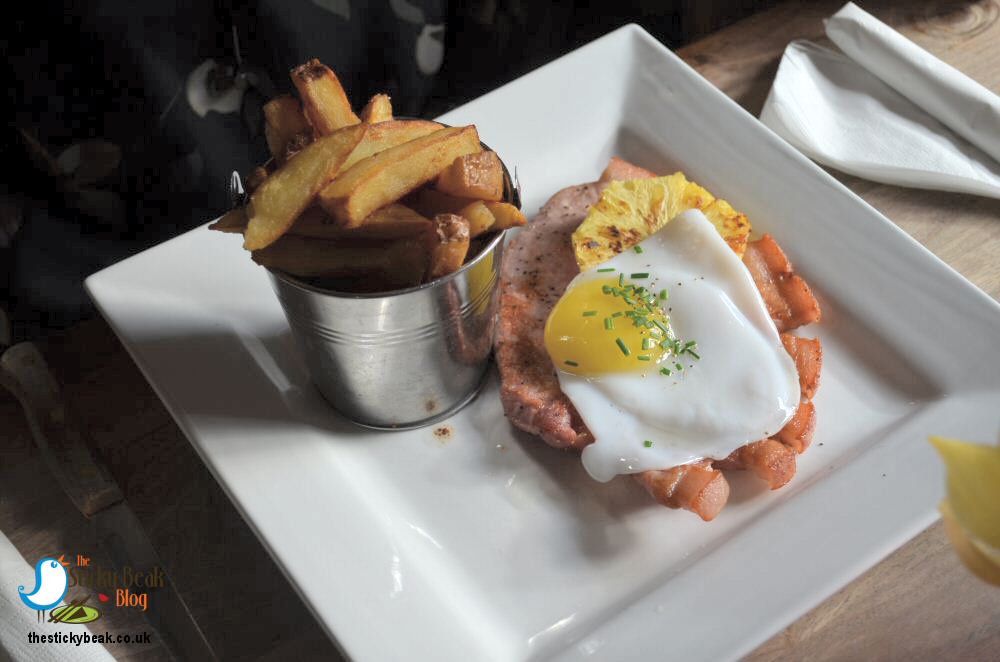 Usually when we dine out en masse it’s my Daddy Bird that will go for a traditional classic dish such as Gammon, Egg and Pineapple. On this occasion it was Mummy Bird that plumped for this dish, albeit with a Duck egg rather than a hen’s one. The Gammon was a good 10oz specimen, and had a good, hearty flavour to it that hit the bulls-eye with her tummy. She loved the wedge of grilled fresh Pineapple that came with it, and was thrilled with the house chips too. As someone who still makes her chips at home in a chip-pan, I think she knows a good chip when she tastes one;  top marks to the Lion Hotels Chef. 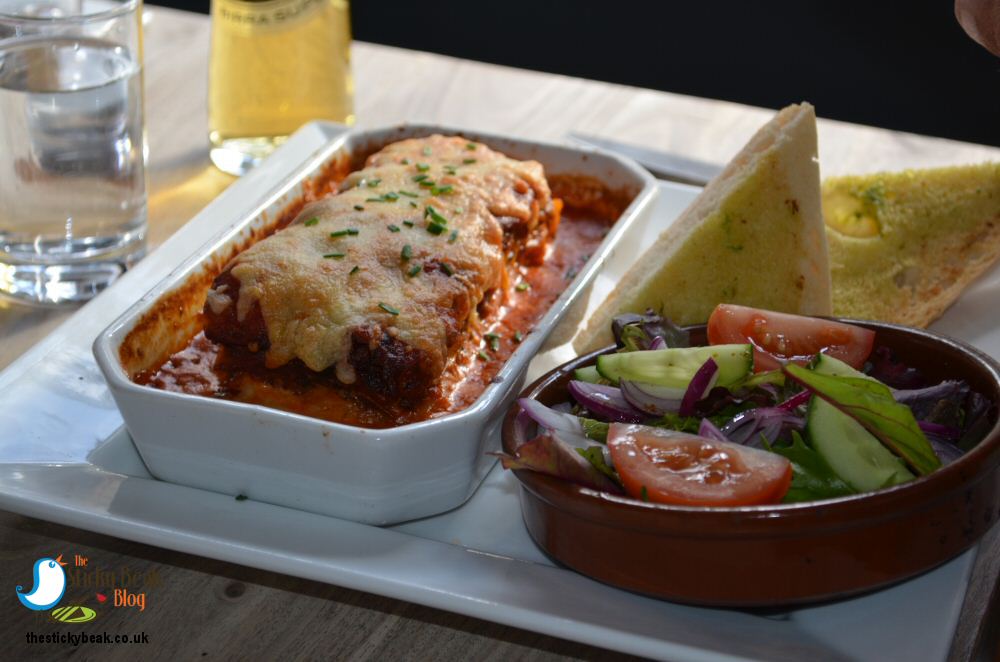 My Daddy Bird didn’t let me down totally; he still chose a traditional dish – good old Beef Lasagne. The Lion Hotel at Belper serves theirs with a salad garnish and slices of aforementioned garlic bread, and the first thing you notice as it’s placed in front of you is the lovely thick cheesy crust on top. Another point worth making is the size of the portion. Goodness knows I can put some grub away, but the Lasagne is double what I would have expected to serve myself – and it was in a blooming deep dish too!  After a bit of puffing and blowing the clouds of steam away (all the food was piping hot, by the way) Daddy Bird wasted no time in making a start on his hefty meal; and he was certainly going to need some time to finish it, that was a given. The verdict at the end, was ”top notch nosh, that”. 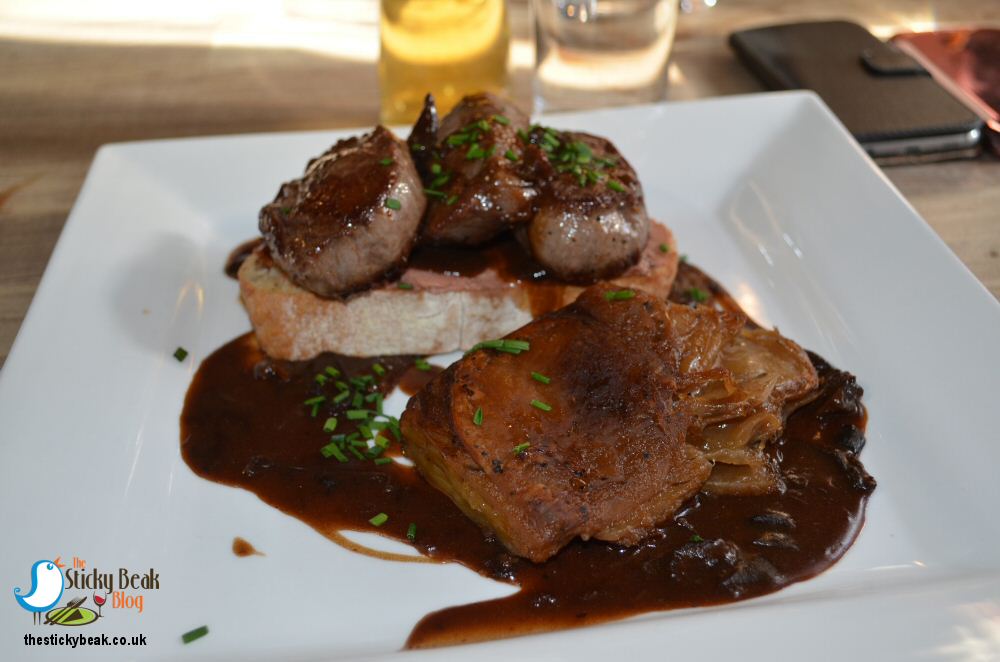 His Nibs decided he was going to push the boat out and have the Fillet Medallion Rossini. Crack on then fella, don’t let me stop you; it is your birthday celebration meal after all! The steak was gorgeous; cooked exactly how he’d asked for it, and tender as you like to cut and chew. It was lovely to see the unbridled joy on his face as he took his time and savoured the richness of the pâté, Madeira sauce, and the steak. Boulangerie Potatoes accompany the steak, which are basically layers of potato and onion slices that are seasoned and cooked in stock. I’m not the hugest fan of potatoes as you know, but I have to say that these were pretty fab; a perfect partner for an otherwise very rich dish. 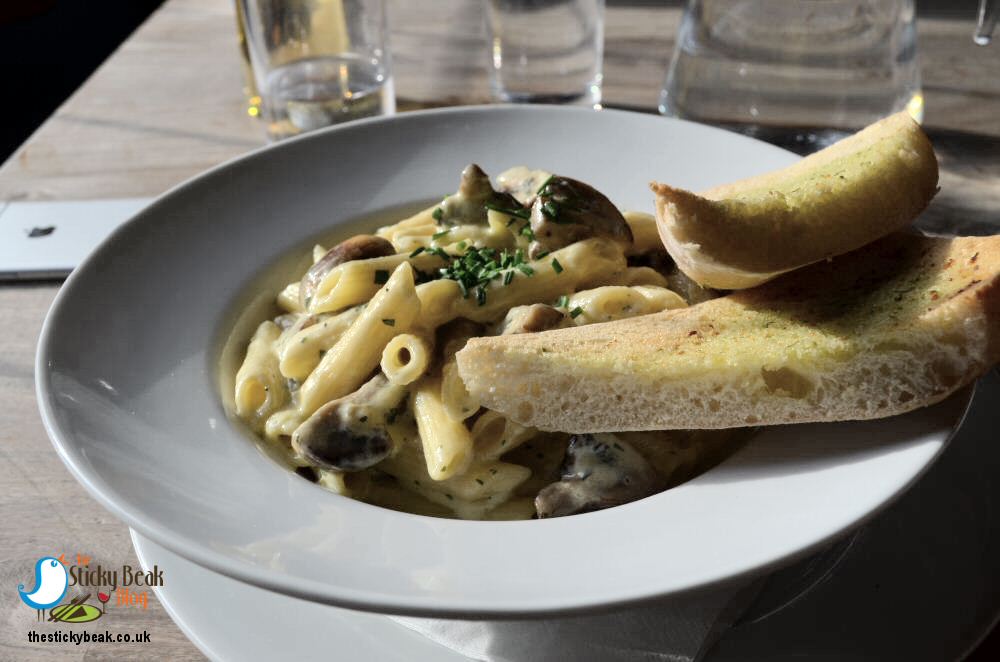 The Tribal Elders wimped out when it came to pudding, but my little flock #Team Glutton trooped on bravely! I had the iced Limoncello Parfait with Raspberry compote and Mint syrup, The Man Bird fancied Rhubarb, White Chocolate and Ginger Cheesecake with Honeycomb, and Our Chick opted for the Ice Cream Sandwich – Chocolate and Vanilla Ice creams in between two White Chocolate Chip cookies with Honeycomb and chocolate sauce. 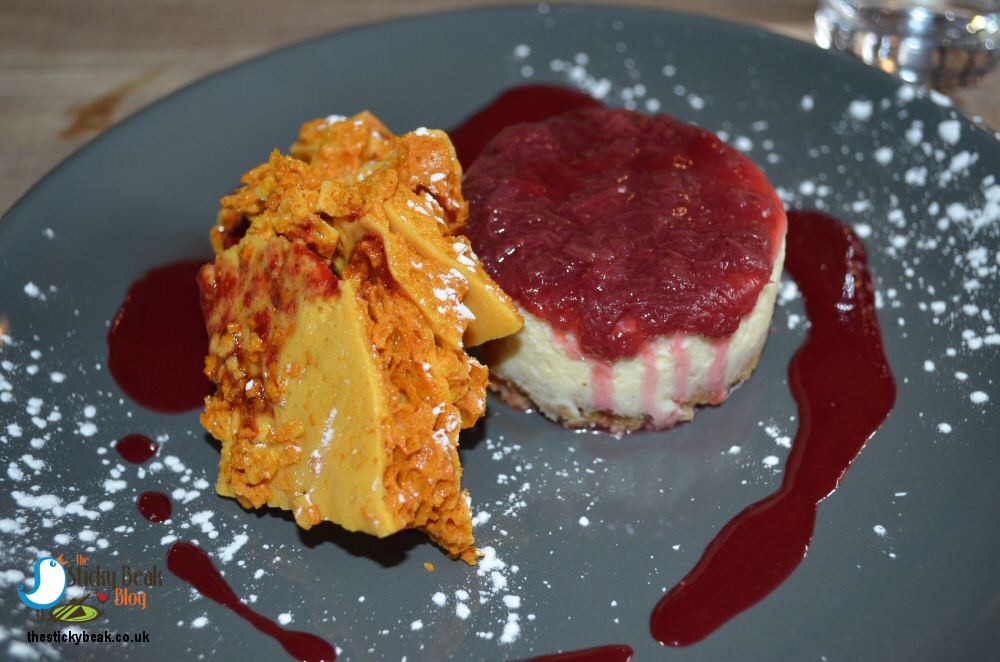 All I can say about the Ice Cream Sandwich is that it was deemed to be very chocolatey (really? Would never have guessed that one kiddo!), and very yummy. The Man Bird thought the balance between the tart Rhubarb, spicy Ginger and sweet Chocolate elements was spot-on; you got a hint of all three coming through nicely in each mouthful. The base was buttery and firm, but not rock hard; it held its shape when cut into without crumbling everywhere, yet you weren’t sawing away at it to cut into it. 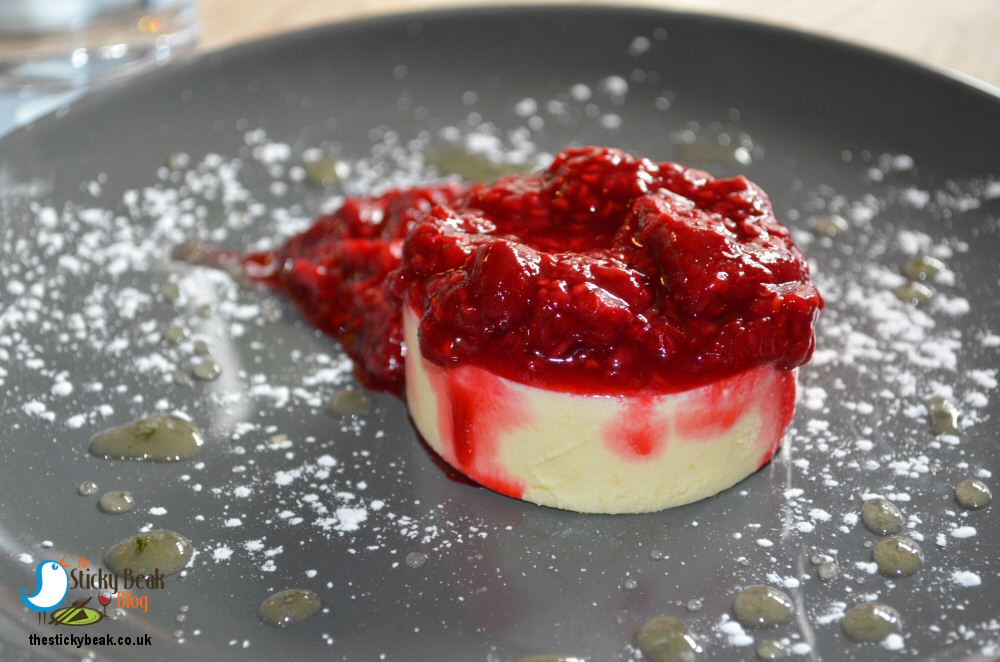 Both of them had gobbled the Honeycomb down like it was going out of fashion, and loved the fact that it wasn’t too gooey as it melted. 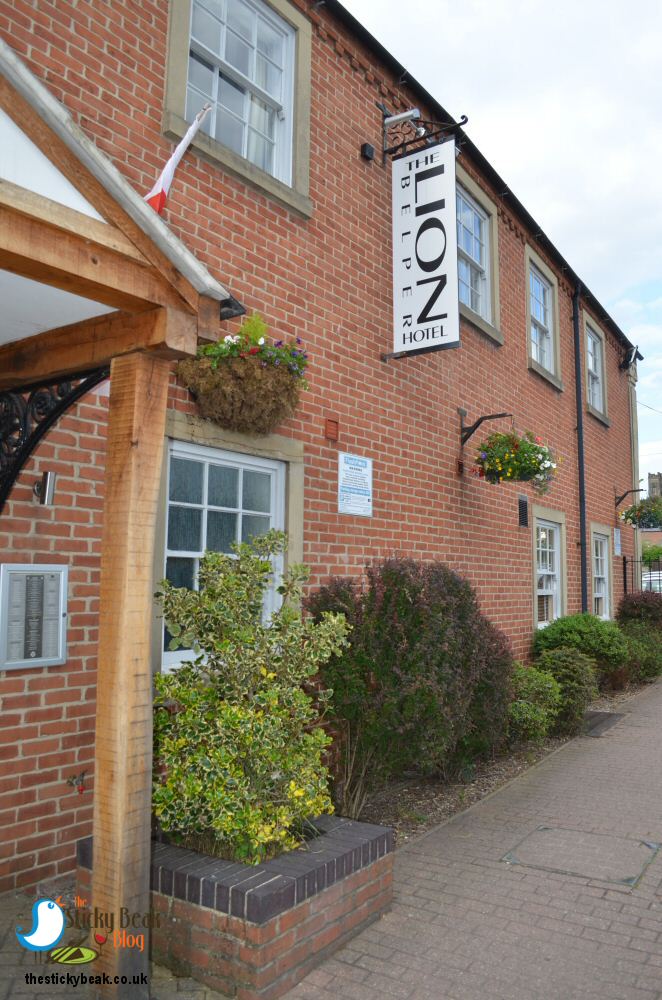 I was a happy camper with my choice of dessert. The parfait was nicely flavoured with the Limoncello, and the Raspberry compote was wickedly zippy against it. Texturally, it was firm in the mouth initially, then gently yielded to the mouths’ warmth where its taste could be thoroughly appreciated. Mint is a light, fresh flavour and it shone like a diamond in the dots of syrup on my plate, keeping the dessert gentle on the tummy at the meals’ conclusion. 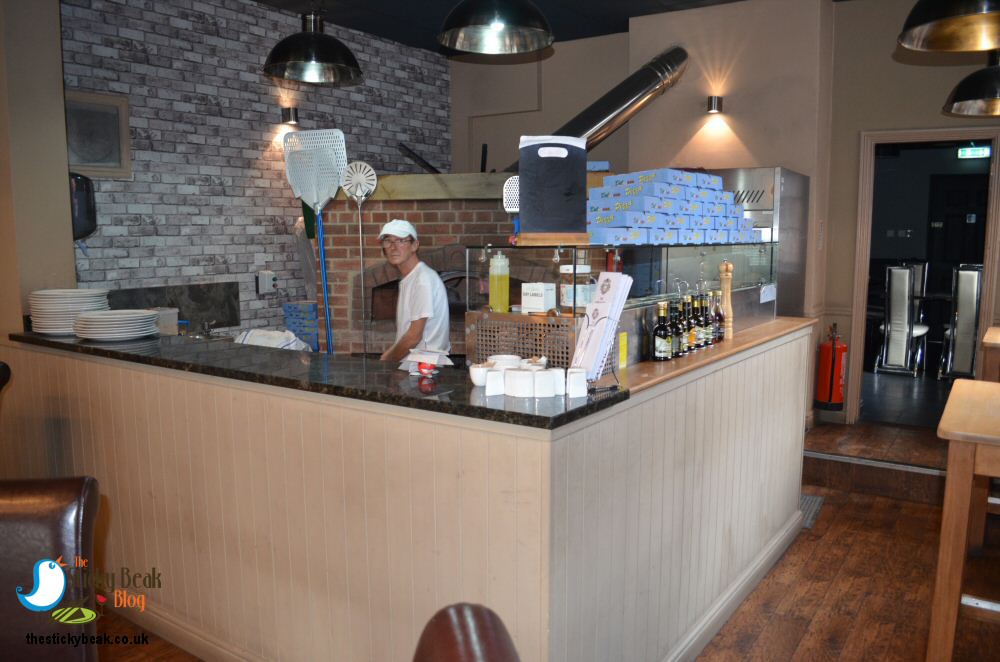 There is another dining area in The Lion Hotel at Belper, where the pizza oven is located, and both rooms were busy on the weekday evening. I would definitely give the team here Hot Wings, and if you want to pay the venue a visit, then do so! The only thing I would say (which is common sense anyway) is that if you want a specific time, or there’s a large group of you dining, then ring ahead in plenty of time to book a table. 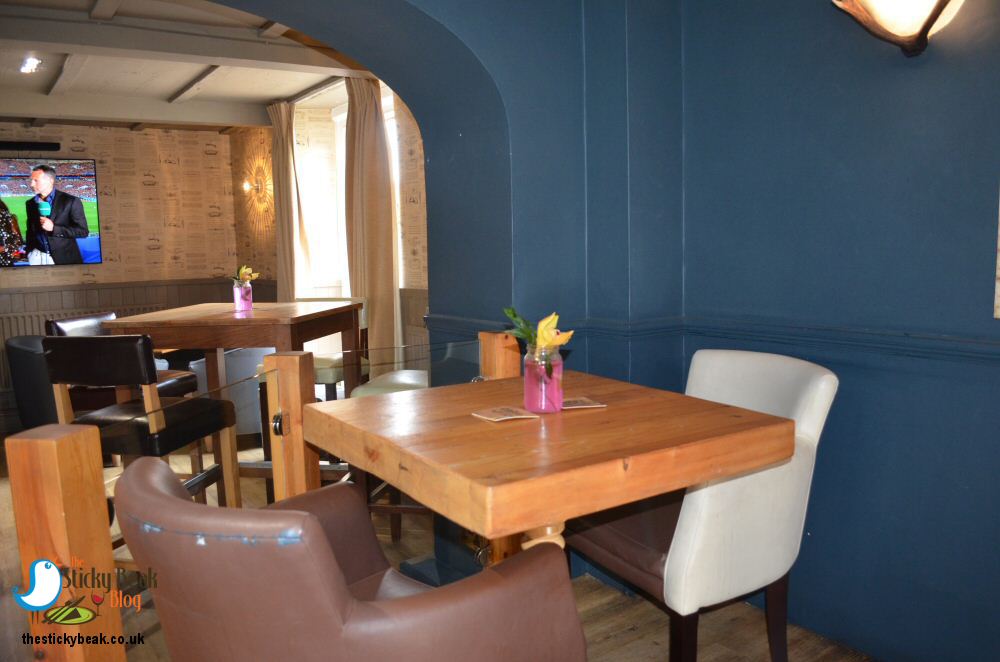 We punched in the number to release the car park barrier, heading home with satiated tummies and wide grins on our faces. A Happy Birthday it certainly had been!