Every now and then The Man Bird and I have the immense good fortune to visit/be invited to somewhere truly remarkable. Last night was one of those times. High in the Derbyshire hills is the charming village of Brassington, and the folk that live here are that increasingly rare breed that cherish and support their local pub. We all know that with a bit of love, care, and attention great things can blossom from ordinary beginnings.

As soon as you step inside the metal-latched front door you can see that this pub is an unspoilt gem. It has stayed true to its origin at the bar, so I doubt you’d be in luck ordering a kir royale or high-faluting cocktail; you can, however, avail yourselves of some good wines, proper ales and all the usual spirits though.

This 17th century Inne has got a gob-smackingly huge open fireplace; seriously, it must be a good 8 feet across including its surround! There was literally only room for a door either side of it! It was a bitterly cold evening, so the roaring fire was seeing plenty of bottoms in front of it as people thawed themselves out. My beady eye spotted a couple of toasting forks hung at the side and I remembered using my Grandmas to toast bread slices on their open fire as a young chick; this was in the days before electric toasters were common placeJ .Also above the fireplace was a wooden beam from which a selection of Pewter ale mugs hung, and there were a couple of copper bed warmers that would’ve had the fires hot ashes put in them to warm mattresses through before bedtime. 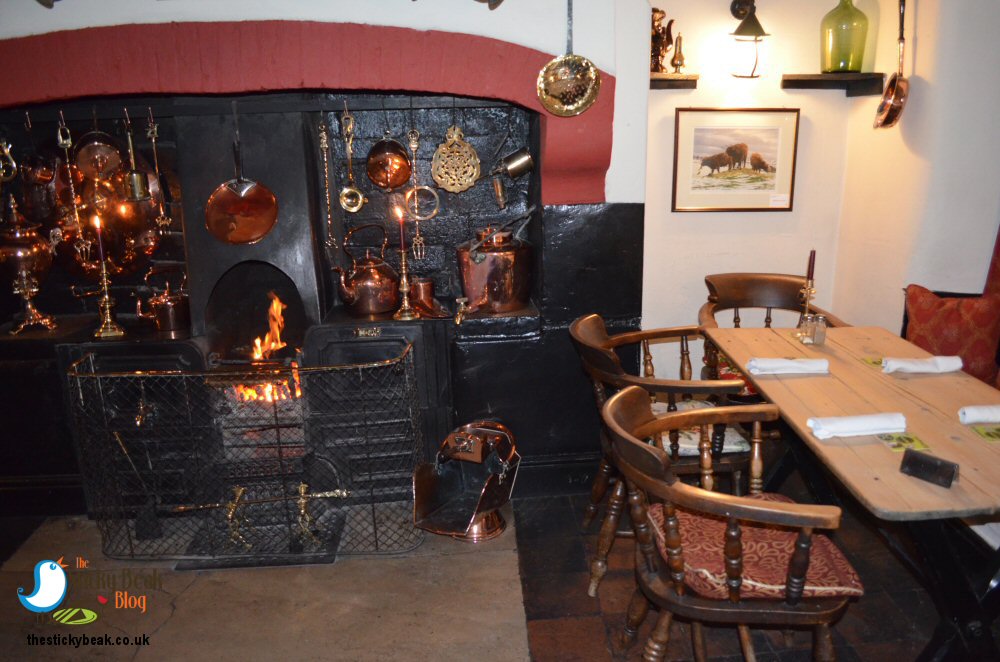 We plonked ourselves at a sturdy wooden table and sat in solid farmhouse style chairs with burgundy seat pads in. On the opposite side of the room was a window seat that had a table in front of it and a bench the other side; it was fully occupied with patrons and the cutest border terrier was sat quietly underneath hopefully waiting for a tit-bitJ .To say Ye Olde Gate Inne is (and I quote the owner) “a pub first and foremost, with a restaurant side to it” they offer a stonkingly good menu. We went on a Thursday evening so in addition to the regular menu and the specials board there was the delights of the Pie Night menu to peruse. 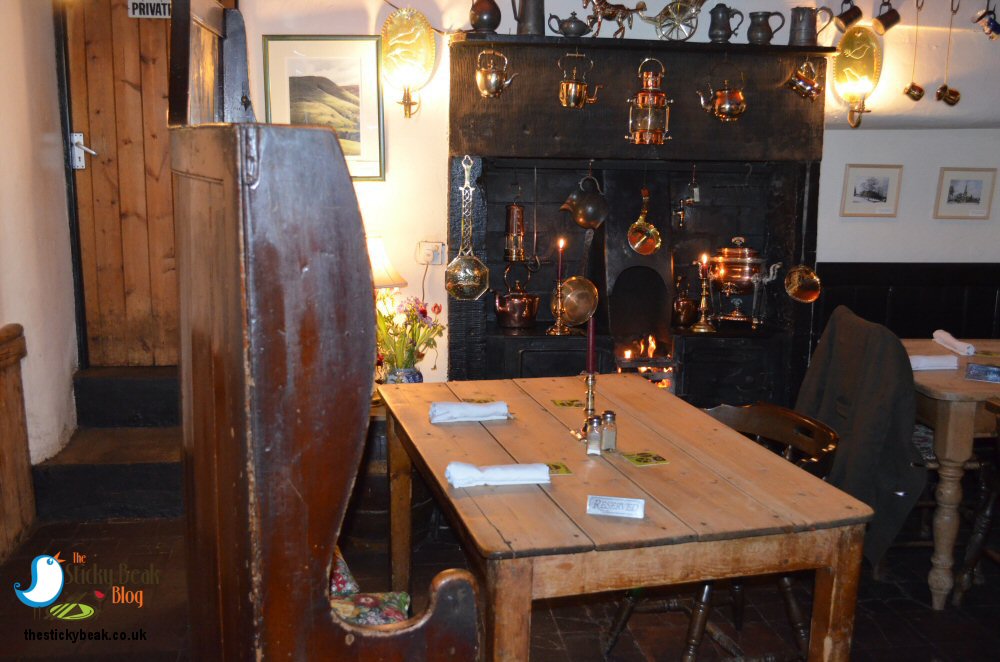 We took our time to decide what we fancied, sipping away on a cheeky glass of Merlot (me) and a pint of Kronenbourg 1664 (him). The pub’s domino team had got an away game so they were discussing tactics over a quick drink before they headed out, laden with trays of sandwiches and other hearty sustenance. After some time deliberating, His Nibs chose a starter from the specials board, the local Lamb Doughnut. I had an item from the regular menu which had got me intrigued to say the least, the Edible Candle.

Now before you all get a mental image of me chowing down on a lump of beeswax let me set you straight. The “candle” is shaped from whipped, seasoned Beef Dripping and is served with mixed dried herbs, slices of bread, and mixed Olives. A little wick is inside and as the flame melts the dripping it softens and runs into the circle of herbs, forming a liquid moat around the candle “castle”. It looked lovely on the table, and everyone needs a smidge of table theatre from time to time. 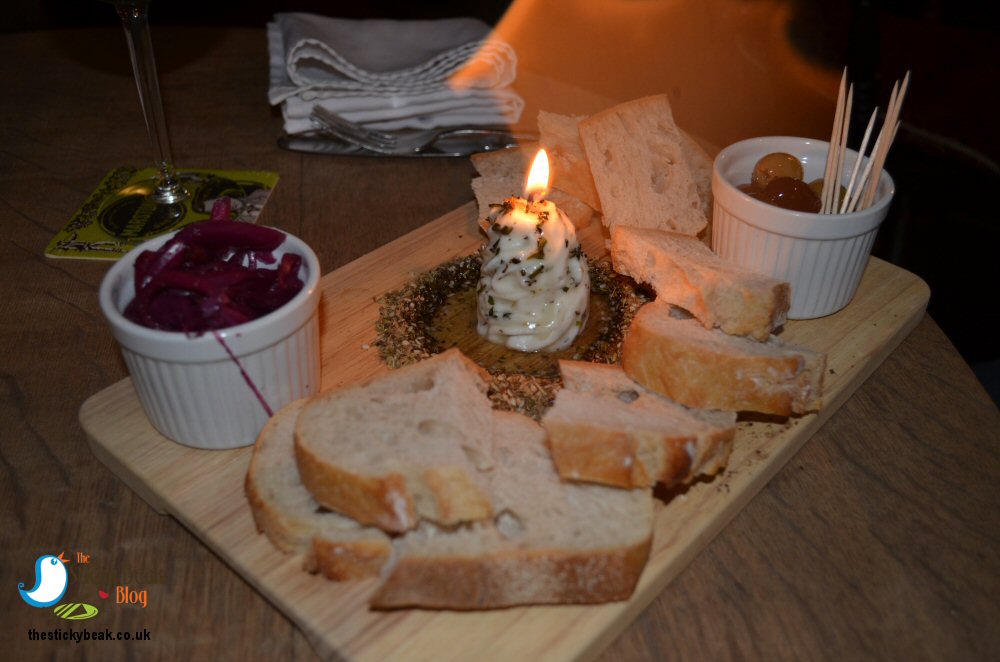 I’m not noted for being the most patient birdie on the planet, so it was killing me waiting for the dripping to melt. I will at this point ‘fess up to cheating and using my knife to carve off slivers of the dripping and start eating it. The dripping was gorgeous in taste, and nice and light in texture thanks to it being aerated and whipped. His Nibs and I dipped the homemade chips in the dripping too later in the meal, and golly did it taste good!

No less stunning than my starter was The Boy Wonders Lamb doughnut. Comprised of local, spiced Lamb that was slow cooked and pulled, then encased in a semi-sweet doughnut; it truly was sublime to eat. The Lamb doughnut was a perfect mix of sweet, savoury and spicy notes and was served on a bed of peppery Rocket leaves (that provided a textural element). The accompanying Apricot jam was surprisingly tart, so everything worked really well together to provide a well-rounded starter. I had a sneaky bite and although there was certainly spice in abundance, it didn’t make my tongue tingle; it did however have my taste buds samba-ing in happiness :) 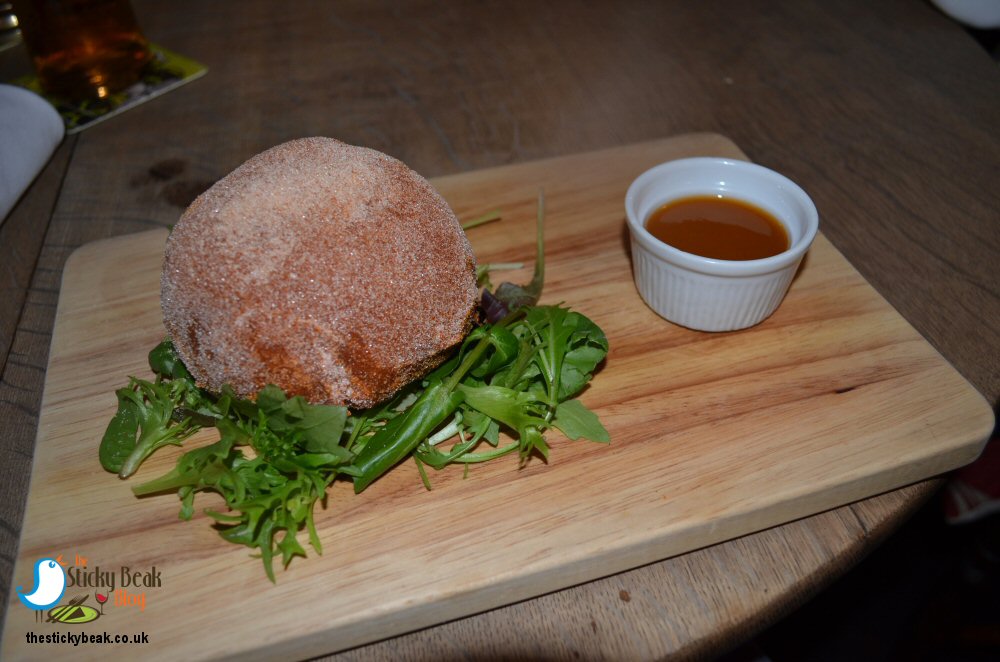 We chose locally shot Pheasant breasts with confit Celeriac, braised Carrots and mashed potato, and the Steak and Ale Pie (well, it was pie night after all!) for our mains and when they came out our eyes popped out on stalks – we were going to know we were eating these monsters! Clouds of steam were issuing forth from the plates, so there was no surprise to discover they were piping hot. 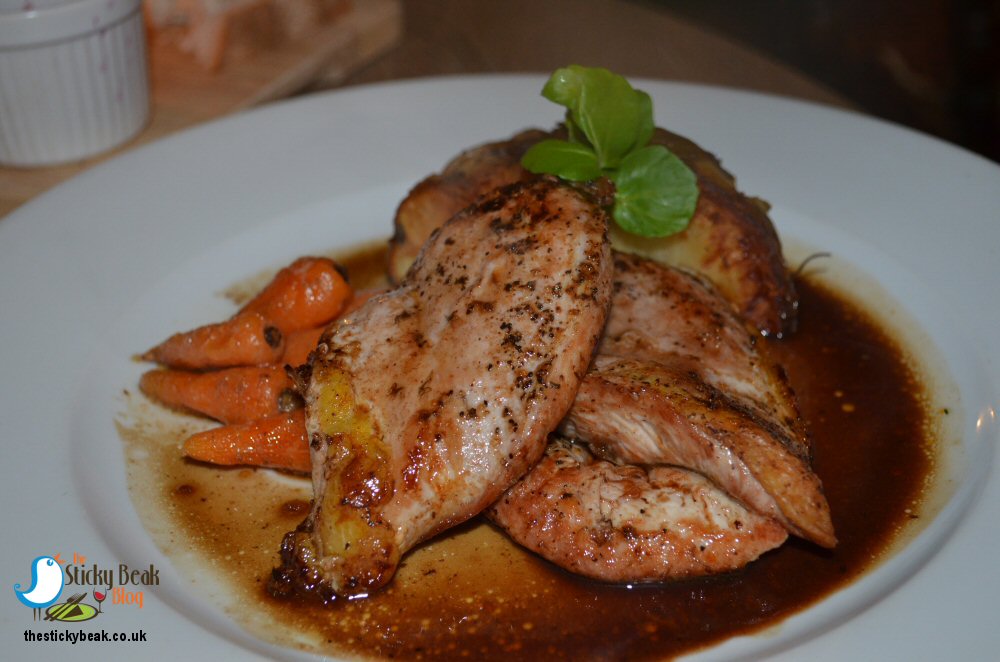 I had both the Pheasant breasts on my plate, and they were very good sized specimens. Chef Phil is clearly used to cooking game as they were lovely and succulent to eat, not dried out and tough. Celeriac is enjoying a resurgence at the moment, something that makes me happy; personally I love its sweet yet earthy flavour and creamy texture. The baby carrots were gorgeous with their butter glaze and just soft inners, and had been kept whole. The piece-de-resistance though had to be the extra little jug of pan jus that came with my meal. Picture the scene; two succulent pheasant breasts, a pile of glass smooth buttery mash, and superb veggies - begging to be slathered in extra gravy. So that’s exactly what I did! Happy, happy days :) 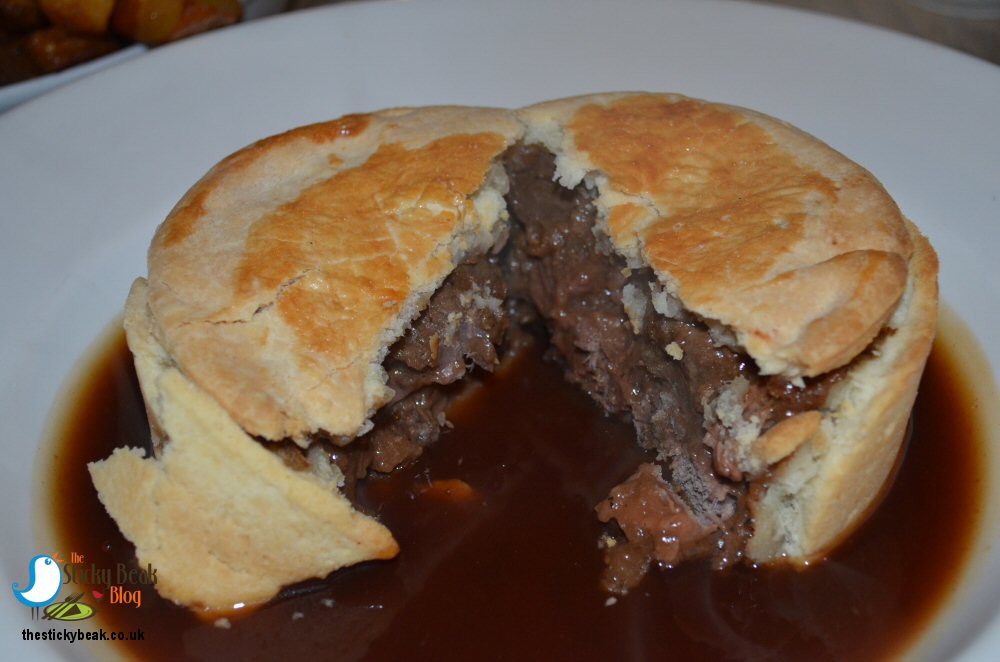 His Nibs was grinning with glee at his pie, and rightly so; it was what you’d call a “proper” pie. At about 4” diameter and it was going to take some eating; luckily I know a Man who’s up to the job. Homemade short crust pastry held just about a whole cow’s worth of steak (or so it seemed) as it was literally filled to the brim! A generous pastry top had been put on and sealed up tightly to keep everything nice and snugly wrapped up. The meat was tender as you like and chock full of taste, so it was barely touching the sides of His Nibs mouth as he eagerly gobbled it up. Chunky homemade, skin-on chips came in a separate bowl, as did a nice mix of vegetables for us to share; Carrots, Savoy Cabbage, Cauliflower, and Celery. The gravy for the pie was poured around the bottom of the bowl and was about half an inch deep, so again a good serving of gravy which is exactly as it should be! 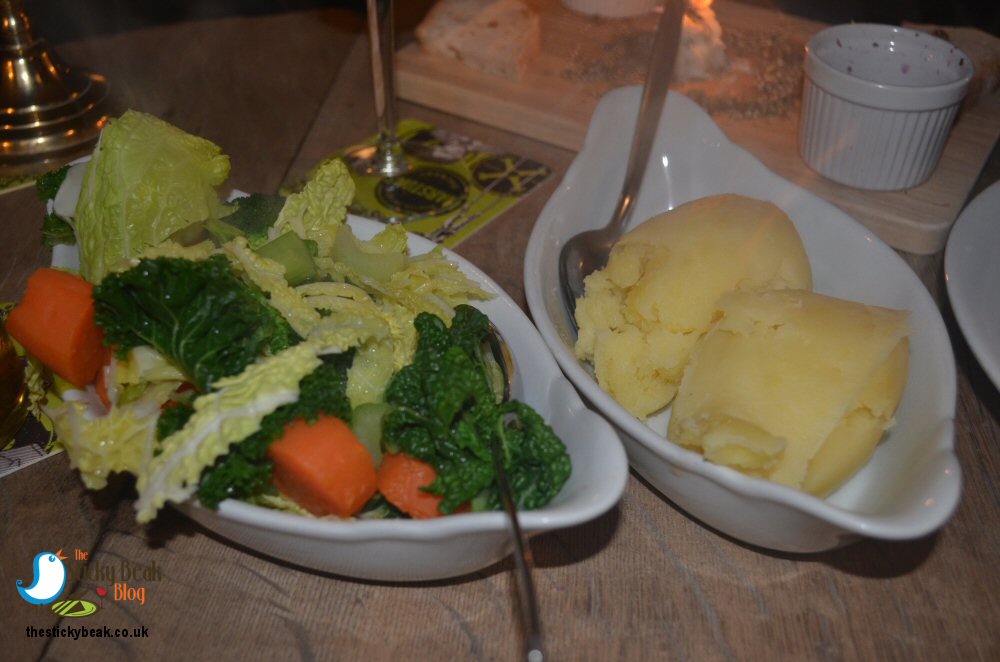 Both meals had been soul satisfying morsels and were perfect examples of hearty winter meals that keep you going. The presentation was very good and whilst it might not be haute cuisine (and it’s not trying to be) the thought behind each dish was evident. Service-wise you couldn’t pick a fault either; all the staff were so incredibly friendly, and ensured that we were happy with our food at each course. 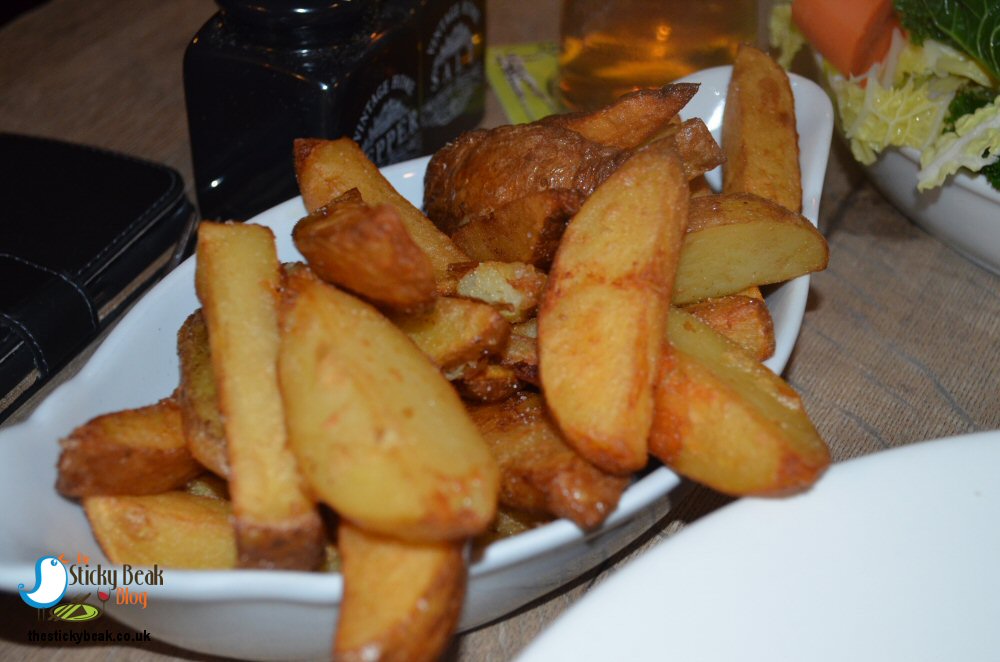 There are times when even my gluttony has to realise its limit, and I conceded the fact that I wasn’t going to be able to manage a pud all to myself. Reluctantly, The Boy Wonder and I shared the homemade Stem Ginger Sponge Pudding and had it with custard. I don’t have many regrets in life but I was sorely disappointed that I couldn’t try the old fashioned suet Jam Roly Poly; I bet it would’ve been a real belter of a pud – although it is a jolly good reason to go back :) 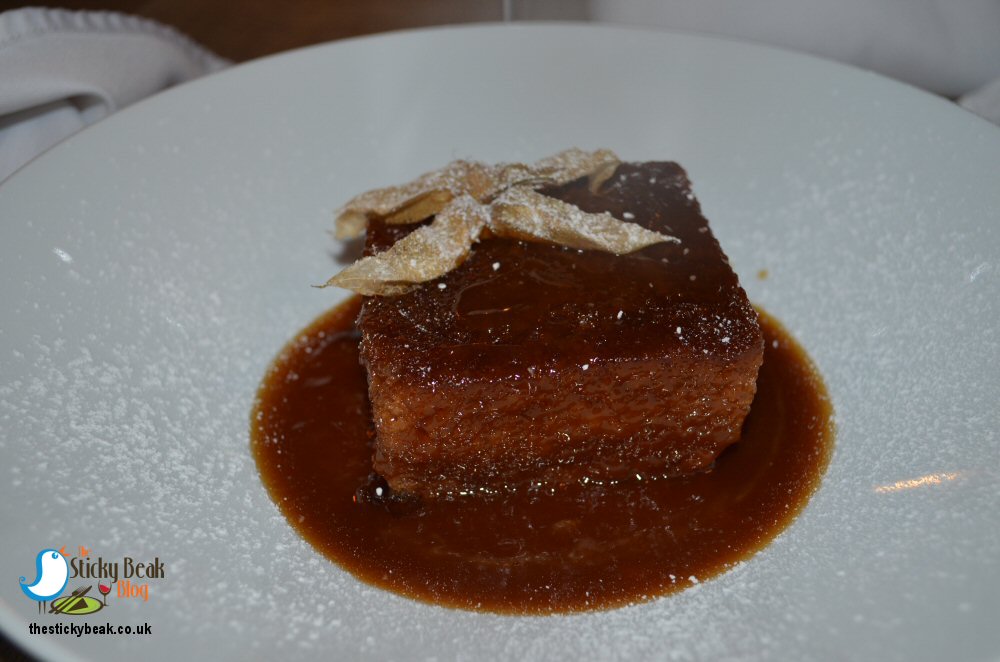 It will come as no shock I’m sure dear reader when I tell you that a huge wodge of Stem Ginger Sponge was served up to us, complete with a very generous jug of custard. I love the kitchen here; they’re on my wave-length when it comes to gravy and custard, i.e. don’t skimp on it sunshine! The sponge was a gorgeous deep amber colour and had a fantastic springiness to it so that it didn’t feel stodgy or claggy when it was popped into my mouth. OK, it wasn’t exactly “popped” in, more like shovelled in with unswerving gusto, but hey, it was totally justified; you’d do exactly the same, trust me. I liked the tiny chopped pieces of stem ginger that were in the pudding too, it gave it a nice texture and the flavour of it was lovely and intense. On the top of the sponge there was a nice treacly layer of sticky ginger syrup and the flavour of that was incredible; really warming and bright on the palate. 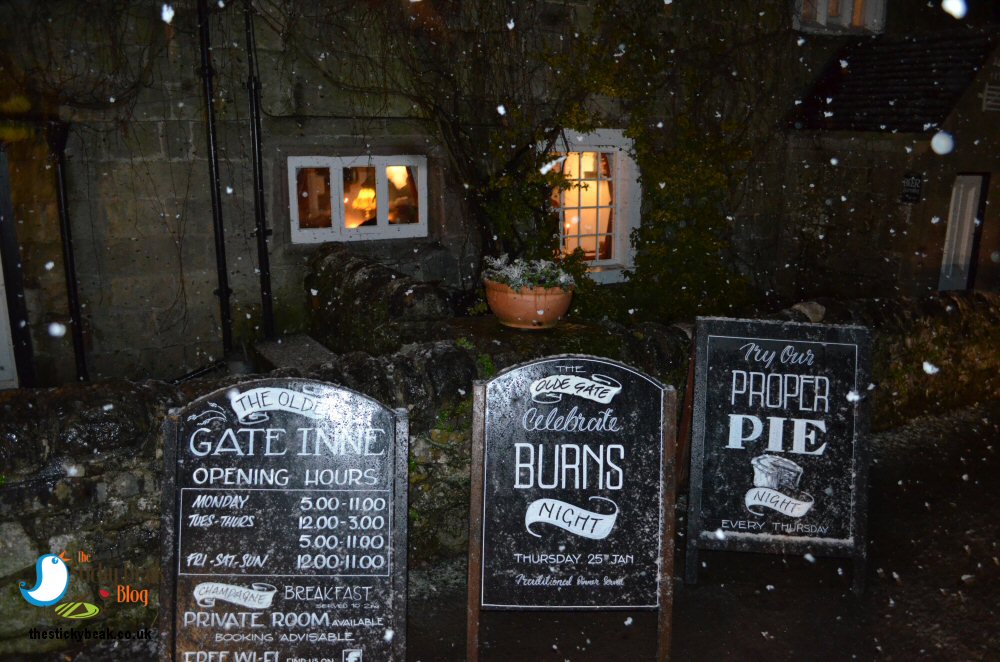 Without any hint of exaggeration, this is one of the nicest meals we’ve had at a pub, and actually one of the nicest, unspoilt pubs we’ve been in. Ye Olde Gate Inne has won several awards including the Good Pub Guides’ Unspoilt pub of the year in 2017, CAMRA nominated Nostalgia Pub of the Year, placed in Derby Evening Telegraphs Cosiest Pub in Derbyshire, and national paper “The Independent” selected the venue as one of their top 13 pubs in 2016. Not bad for a village pub eh?

I think you’ve probably gathered that Hot Wings are 110% deserved for Ye Olde Gate Inne at Brassington’s team. It isn’t the hugest venue, so I would err on the side of caution and book in advance for a table to be honest, and it’s definitely worth going and trying out Pie Night on Thursdays. It does have a good sized car park though :)

Chef Phil managed to grab a few minutes and have a chat with us, and one thing he did say was that from next month (February 2018) they’re going to be running a theme night. I’m not allowed to divulge the finer details, but trust me dear reader, there’s some exciting things in store! For more details contact the team on 01629 540448.