I love the chance to dress up and unleash my inner Jane Marple (not sure how His Nibs feels about being compared to Poirot!), so when the Kedleston Country House team asked if we’d like to join their “Great British Bump Off” murder mystery night it was a no-brainer :)

As well as a three course dinner, guests are immersed in a fully interactive murder, mystery, and suspense evening thanks to the fantastic acting team that deliver this extravaganza. His Nibs and I were purely invited for the party night which costs £35pp, but you can go the whole hog and stay overnight with a continental breakfast the next morning; prices start from £150pp. 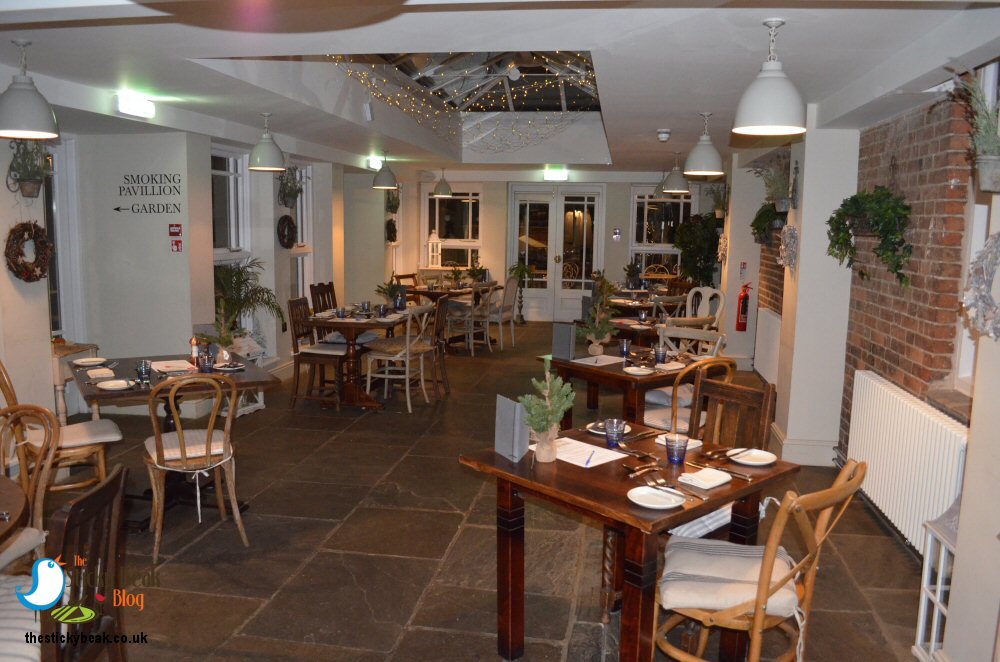 The Orangery was the setting for the dining and the entertainment, and it looked so beautiful with miniature Christmas trees on the tables and a canopy of twinkling fairy lights across the skylight. With everyone in their seats and settled in with drinks, the cast of Murder On The Side set the initial scene for us; Mary Belly, Paul Wallyhood and Noel Feelings were having a right old ding-dong.

This continued a while with insults being flung fast-and-furious between the celebrity “chefs”, before Paul Wallyhood staggered around theatrically as he breathed his last. Several of the “strapping” male diners were roped in to dispose of the body, including The Man Bird himself. 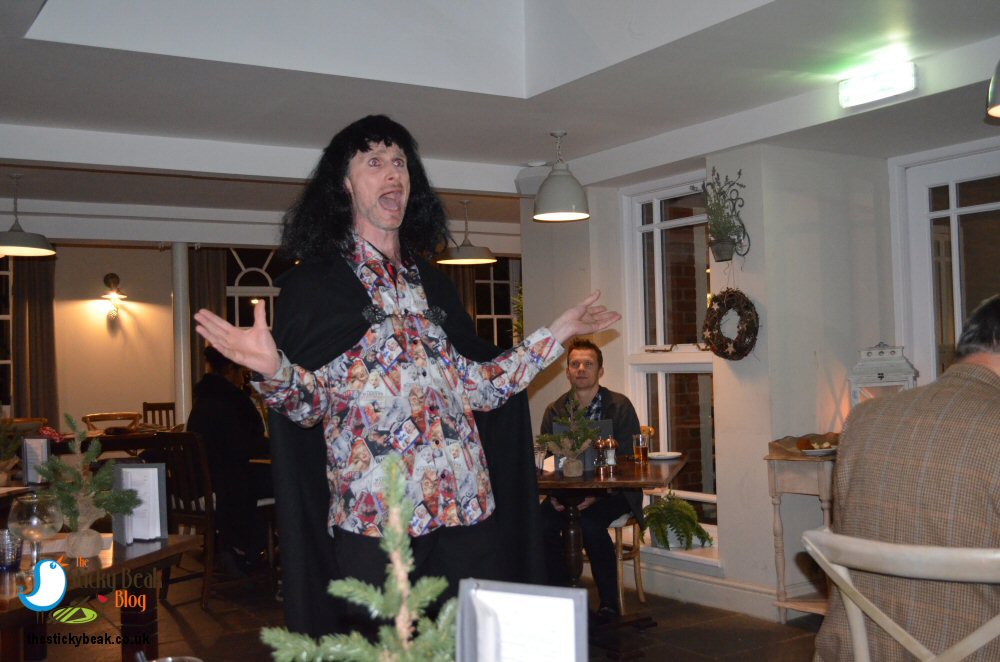 Bakeover contestants Victoria Sponge-Fingers and Scott Chegg also introduced themselves and gave us an insight into their characters and the depths to which they were prepared to go for glory. Victoria was dismayed to hear that Paul Wallyhood wanted to abolish sugar and take Great British Bakeover down a more (un)savoury route. Scott was more than happy for this to happen; however, he was angry to hear his beloved Mary Belly was to be axed in favour of Ainsley Charriet. 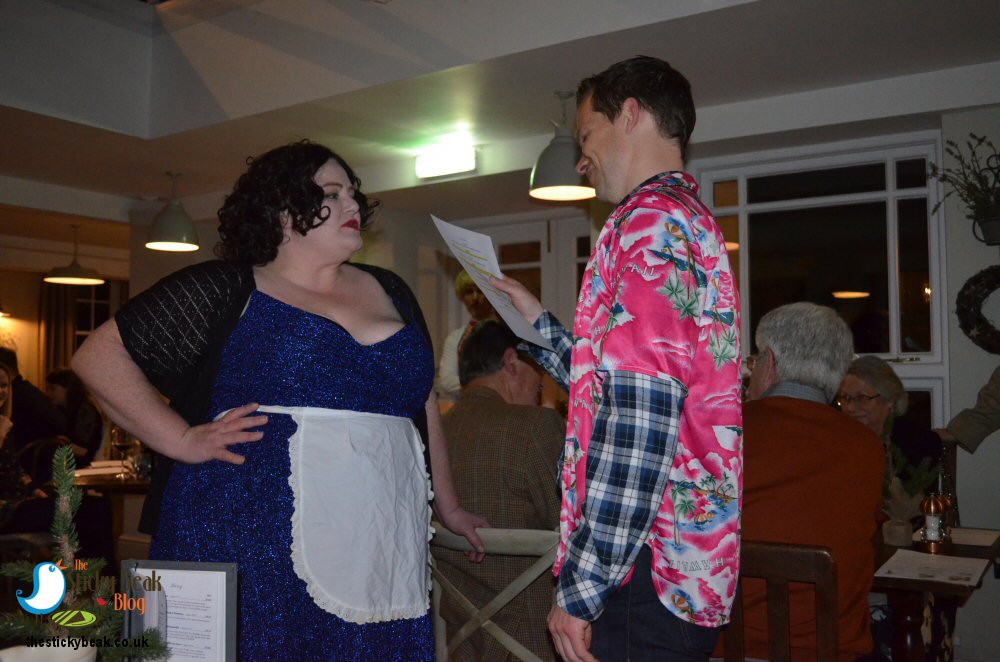 With the initial scenes and clues given, we all took notes on our crib sheets with the pens provided whilst we could remember the pointers that the Narrator gave us. A flurry of activity from the waiting team alerted us to the beginning of the meal. I had the Kedleston Crab and Crayfish Cocktail to start; The Man Bird had the Chicken Liver Parfait. 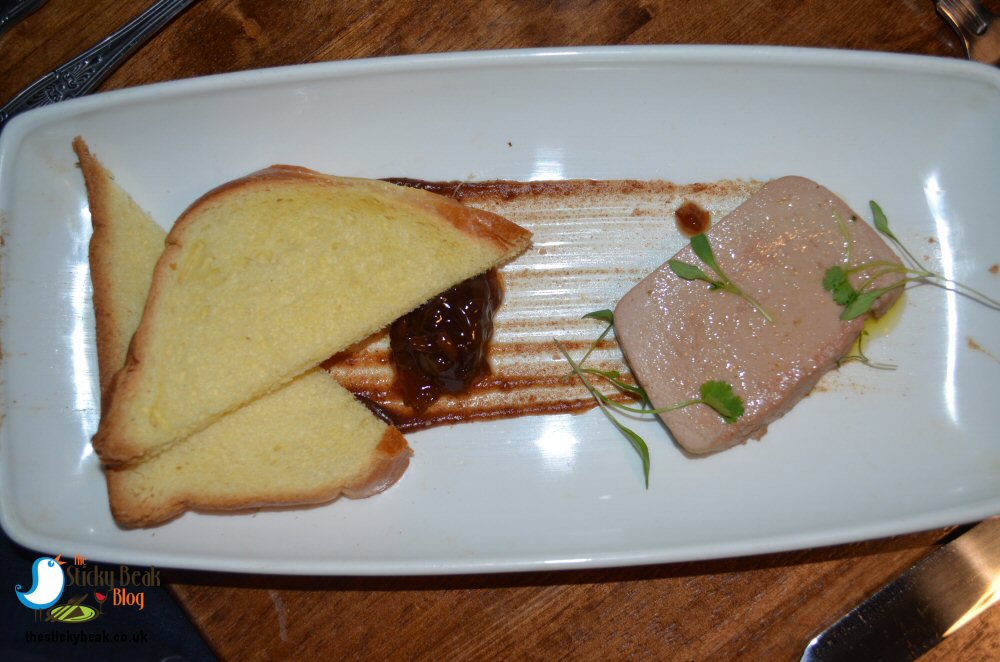 The presentation of both dishes was lovely (I wouldn’t expect anything less from Chef Garth Sequeira’s kitchen) and we tucked in, chattering away about who we thought “dunnit” initially. The Crab and Crayfish were both lovely and succulent, and plentiful too; they lay on a nice deep bed of shredded lettuce and were bound in a classic Marie Rose sauce. Coral-hued fish Roe gave a fantastic pop of saltiness to the dish, as well as looking very beautiful.  I drizzled a little of the juice from my fresh Lemon wedge over it too, to increase the tartness on my palate. 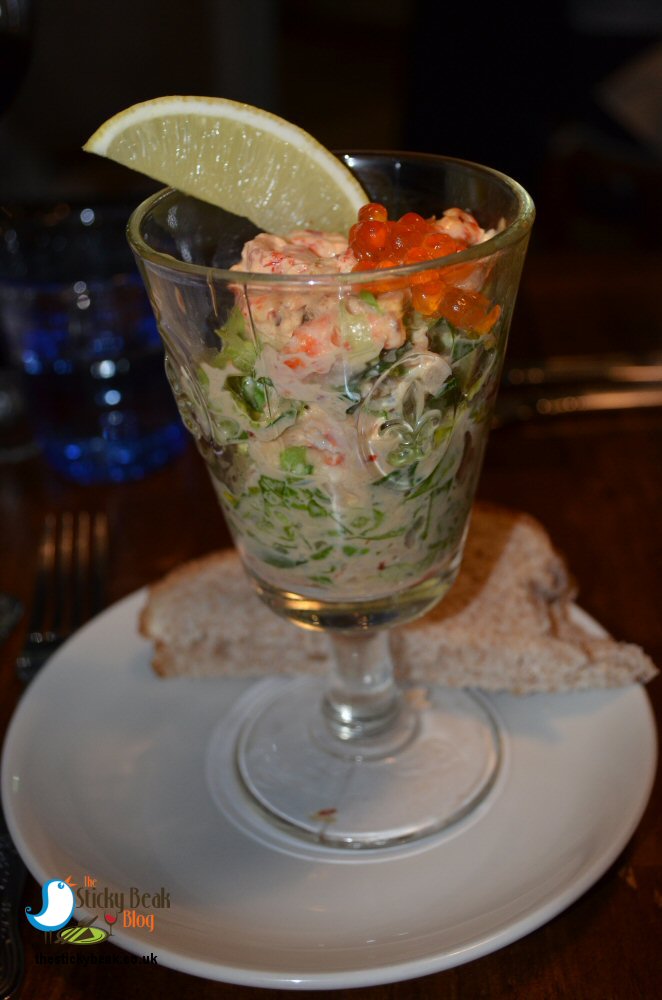 His Nibs had chosen the Chicken Liver Parfait, Red Onion Marmalade, and Brioche to start his meal, and as he took his first mouthful, a little murmur of appreciation escaped his lips. The parfait was incredibly rich in flavour and as smooth as glass texture-wise. Brioche is a little sweeter than ordinary bread and it would’ve been so easy for this starter to become overly rich and sweet, but the tang from the Onion marmalade prevented this from happening. Two empty plates from our table were taken back to the kitchen, and the same happened at other tables too.

With the tables efficiently cleared, there was just enough time for drinks orders to be taken and brought through before Detective Corner of “the Yard” made his presence well and truly known. 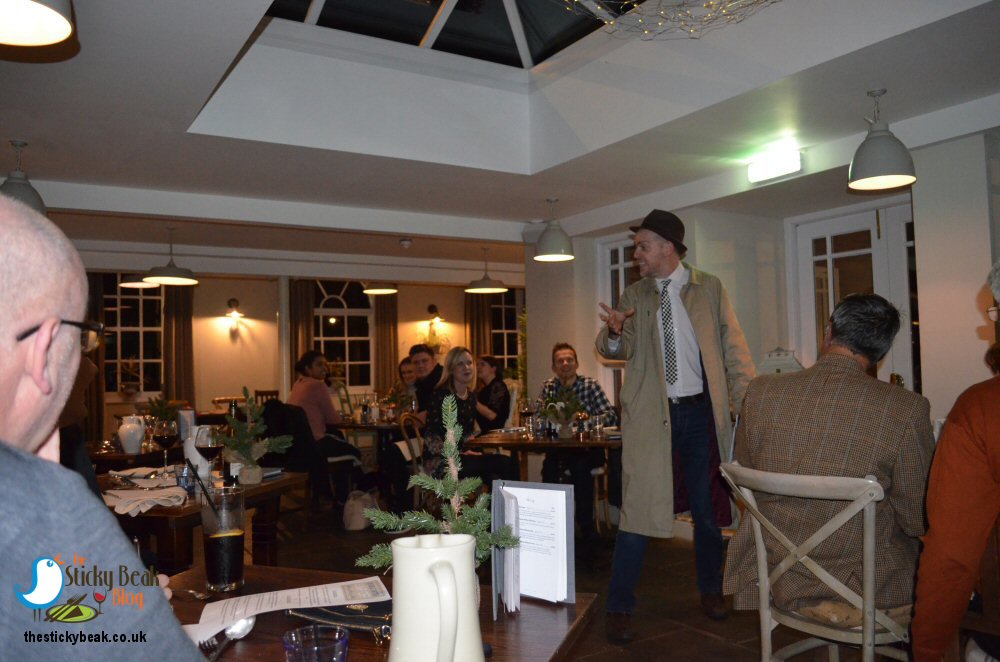 We had all been given “cash” to buy additional clues with, which could then be swapped or sold with the other tables. Much activity ensued and notes were scribbled down and guarded fiercely.  Several of the evening’s guests had been allocated bit-parts in the murder mystery, enacting scenes between The Great British Bakeover’s cast and crew. Ainsley Charriet, Randy Cocksbig, May Belline, Len Scap, and Billy the Goat were all given a script to read from and prompted when to perform.

Ainsley and Randy strutted their stuff (rather well, it must be said), before it was time for us all to enjoy our main courses. 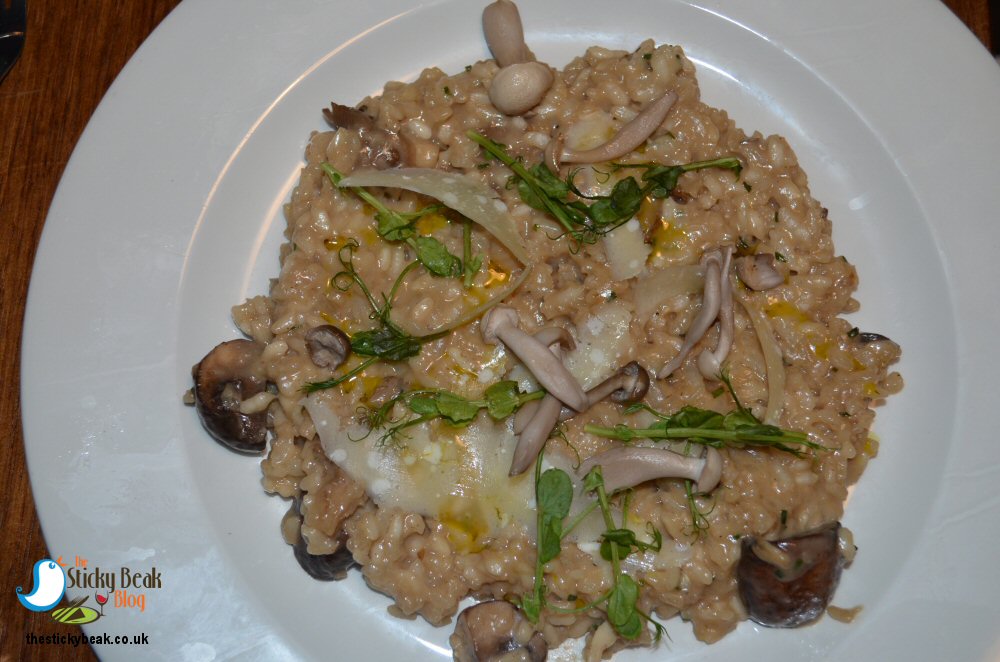 For my main course I went off the beaten (Christmas) track and had the Truffled Mushroom Risotto with Parmesan and Sautéed Wild Mushrooms, but His Nibs maintained tradition and had Turkey stuffed with Sage, Cranberry and Orange with all the trimmings; Brussels Sprouts, Chestnuts, glazed Chantenay Carrots, Parsnip, and Pigs in Blankets -  oh and a proper meat gravy!

The Turkey was wonderfully moist, and had a lovely flavour to it. His Nibs actually tried a couple of the Sprouts!! Whilst they’re never going to be something he likes, he did say that the firmness and sweetness of these ones was excellent. The Parsnip however came swiftly over to my plate, before it could touch (and contaminate) anything on The Boy Wonders’ dish - I think he regressed back to 5 years of age; touch and contaminate, honestly! All the vegetables were perfectly cooked and chock full of flavour, but the Thyme roasted Potatoes were truly magnificent with their herby infusion, crisp outers and cloud-like inners. Yum! 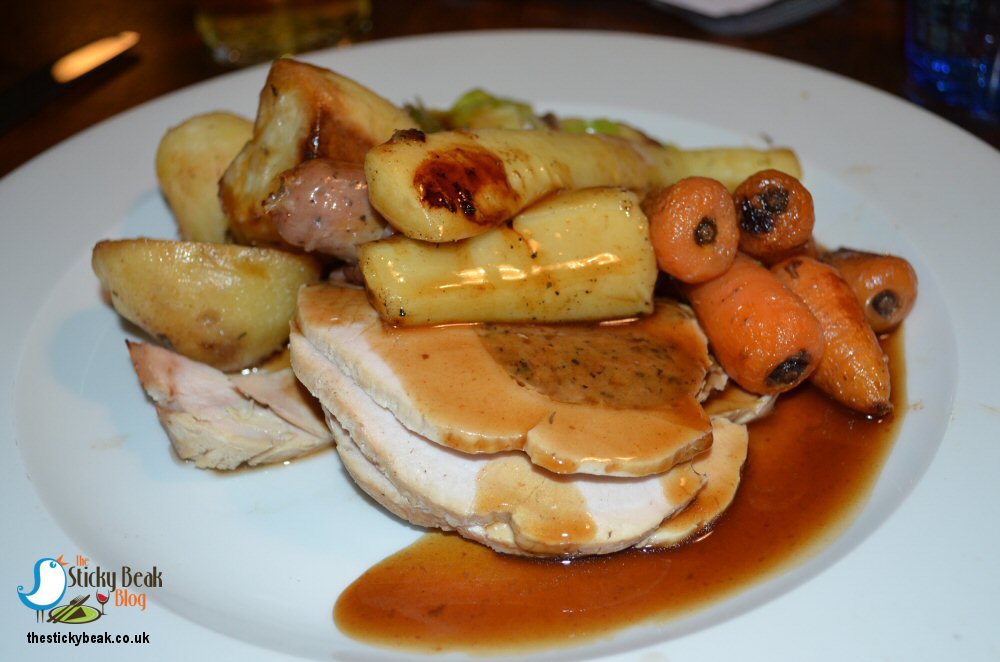 My Risotto was absolutely delicious and the rice still had that perfect bit of bite to it; I hate it when a Risotto is made and the rice is completely soft. No people, just no. There was a lovely variety of Mushrooms in the dish and they all had individual characters and textures to appreciate. Delicate shavings of pungent Parmesan were scattered on the top of the Risotto and its flavour cut through the creaminess brilliantly. I had been in two minds whether to have the Risotto or the Salmon fillet, but I’m glad I tried Garth’s Risotto :)

Once again the serving team cleared the tables efficiently so that more scenes and clues could be given to solve the murder of Paul Wallyhood. A round of clue-swapping had seen that a couple of clear contenders emerged as the dastardly villain, but more information was forthcoming from the conversation between cameraman Len Scap and make-up artist May Belline. As is often the case, the star of the show was Billy the Goat! 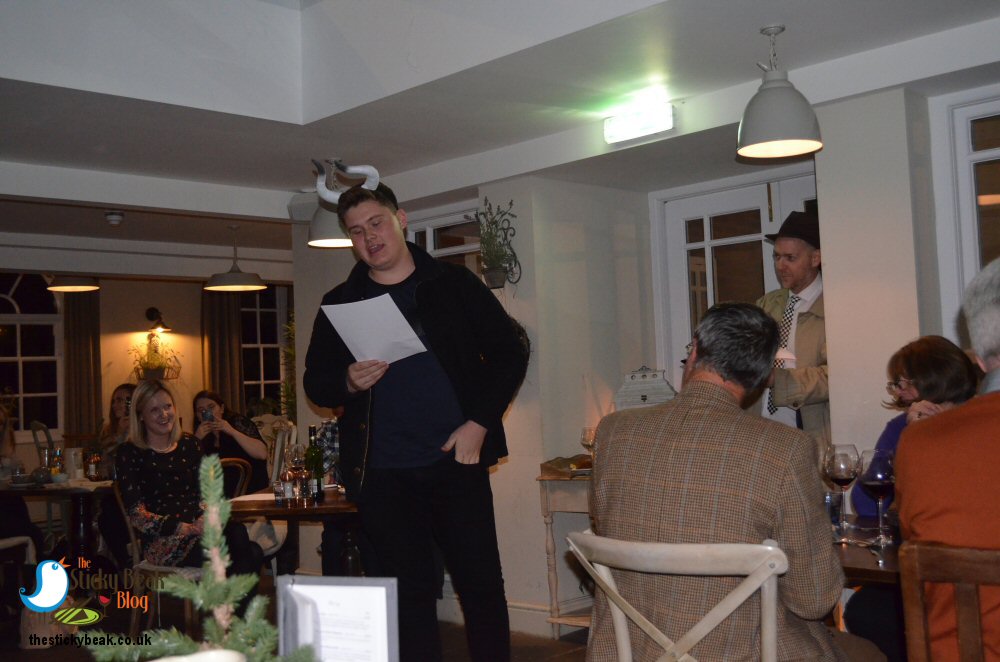 With all the scenes and clues out in the open it just remained for the teams to fill in the competition sheets, but not before they had to write their own Limericks about the cast of “The Great British Bakeover”! As before, The Kedleston Country House team refreshed drinks for those who wanted them.

Pudding was something I had been looking forward to, given the very high standard of the previous two courses. I had opted for Baked Fig “Christmas Spices” with Mascarpone Panna Cotta and Brandy Snap; again The Boy Wonder followed the traditional route and had Christmas pudding with Brandy sauce. 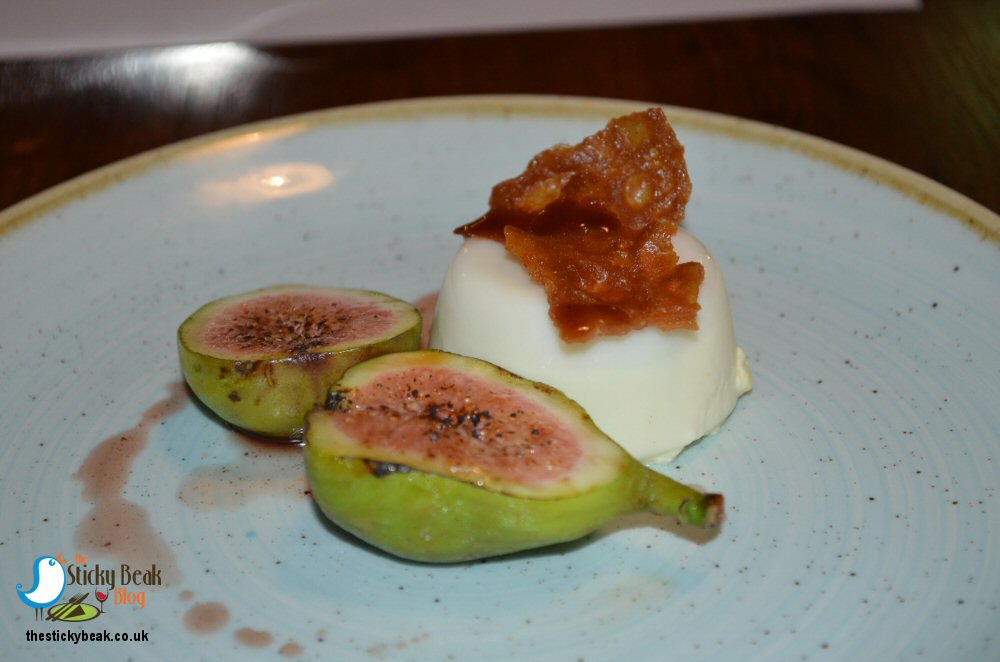 You can always count on Chef Garth Sequeira to put his own spin on a dessert; in this case the Christmas pud was relatively soft, almost figgy, with the fruit and nuts being scattered around the platter or on top of the pudding itself. The fruit had clearly had a good bathe in alcohol as the warmth it imparted when swallowed was definitely discernible! Walnut halves had been lightly candied and their crunch was a great contrast to the smoothness of the pud. You can’t beat a good quality Brandy sauce, and if it’s homemade, so much the betterJ The Man Bird eagerly got every last drop off it onto his spoon and into his mouth; suffice to say he enjoyed it! 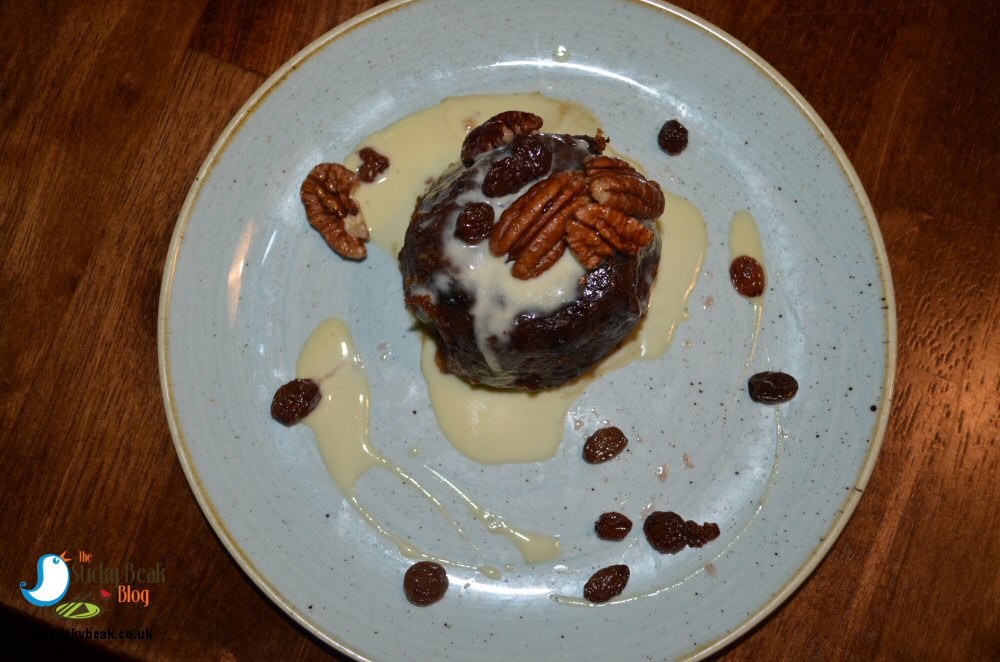 What can I say about my Panna Cotta, Figs, and Brandy Snap? Sublime sums this dessert up perfectly I think. Wonderfully creamy Panna Cotta contrasted with the crunchy Brandy Snap and the ripe, fragrant Figs had delicately spiced syrup drizzled over them; my taste buds were applauding Chef rapturously, as they revelled in all the flavours and textures.

For the final time the serving team worked their magic and cleared the platters away in double-jig time with no fuss at all. All the cast of Murder On The Side came out and judged the limericks, revealed the evenings winners, and awarded prizes accordingly. 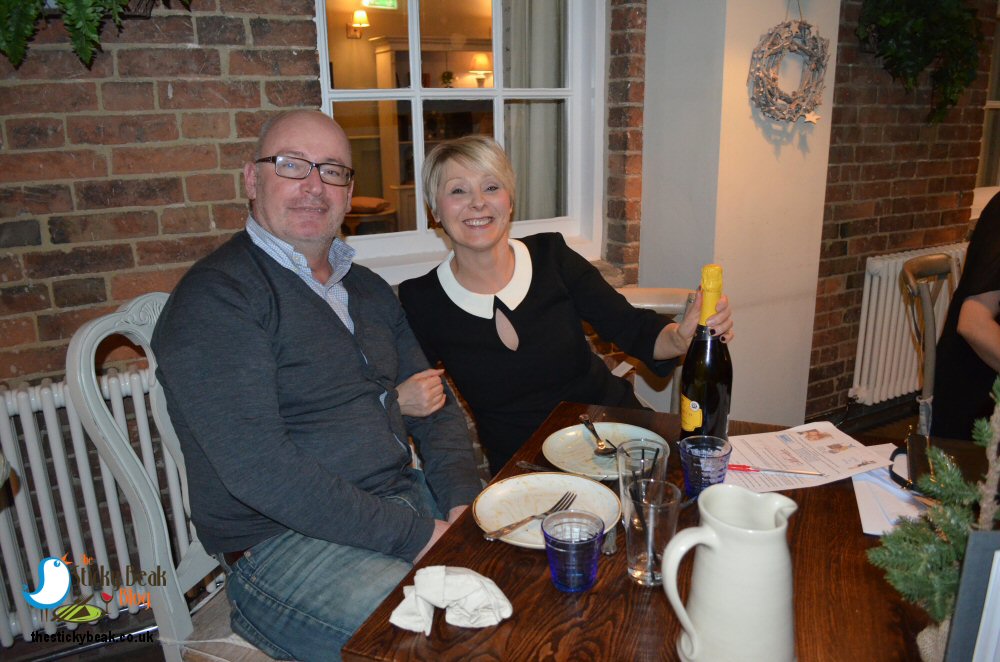 All too soon the evening drew to a close, and I have to say it had been amazing from start to finish; the time just flew by! All of the Thursday Murder Mystery nights are sold out, but on Tuesday 19th December 2017 there are still spaces available for “Alice in Murder Land”; this evening also includes a free glass of wine!  To book a place on this Christmas Party nights simply phone the Kedleston team on 01332 477222 or email Kedleston@derbybrewing.co.uk

Thank you to all the Kedleston Country House staff and Murder On The Side actors involved for giving us such a memorable night. Hot Wings well deserved all round :)