Dinner At The Elaichi Indian Restaurant in Belper

Sometimes, just sometimes, children actually come in handy; on this occasion it was Chick and her friends having a night out and the subsequent need to be fetched from Belper that provided us with the perfect excuse for a spontaneous night out. We had been meaning to try Elaichi in Belper for absolutely ages and time had somehow run away with us, but last night we finally got there, and it was worth the wait.

Downstairs is a dedicated reception area with a bar in, perfect for a cheeky pint whilst you wait to pick up takeout or if you’ve arrived a little early for your reservation. A lovely man took us upstairs to the main dining area with its wooden floors and modern lighting and I love the table linen colours of crisp white accentuated by a regal purple edged in gold. 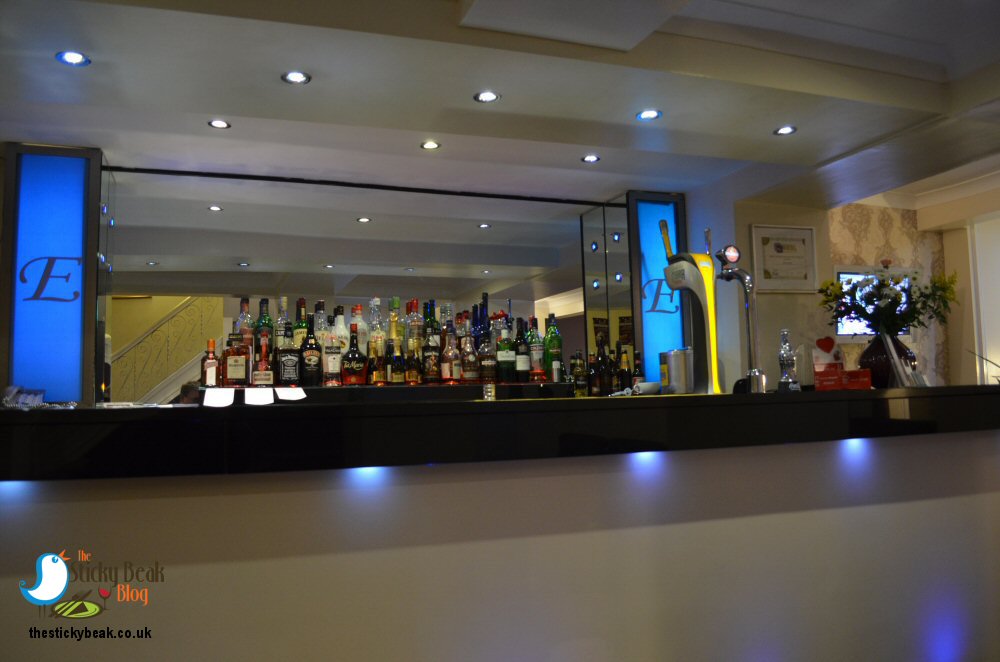 Fresh floral arrangements are on each table and the scent of incense gently perfumes the air. The restaurant was very busy, as you would expect on a Saturday evening, so there was a lively buzz of conversation and laughter ringing through the room. The Man Bird ordered a pint of Cobra lager seeing as it was on draught (apparently it tastes better than bottles) and I ordered water with lime for myself.

For starters His Nibs had the mixed platter of Chicken Pakora, Aloo Pakora, Meat Samosa and Onion Bhajee and I had the Tandoori Chicken. My chicken was nice and tasty with a very pleasing covering of the flavoursome marinade and I was thoughtfully offered fried onions separately, which I declined, but it was nice to have the choice. 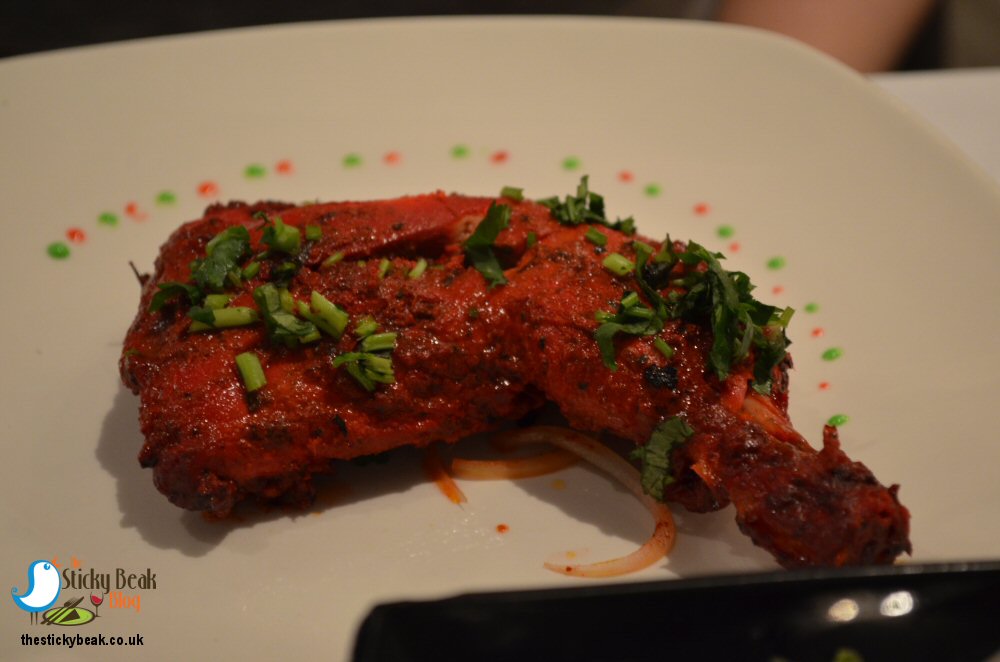 The Boy Wonder loved the selection in his platter and said that the batter, where used, was nice and light and not greasy at all. Nicely spiced Lamb was used in the meat Samosa and the potato had a good spicy kick to it as well in the Pakora. The Chicken was tender and juicy, not dried out at all, and the Onion Bhajee had plenty of taste to it as well, so he was a happy camper with his choice of starter. 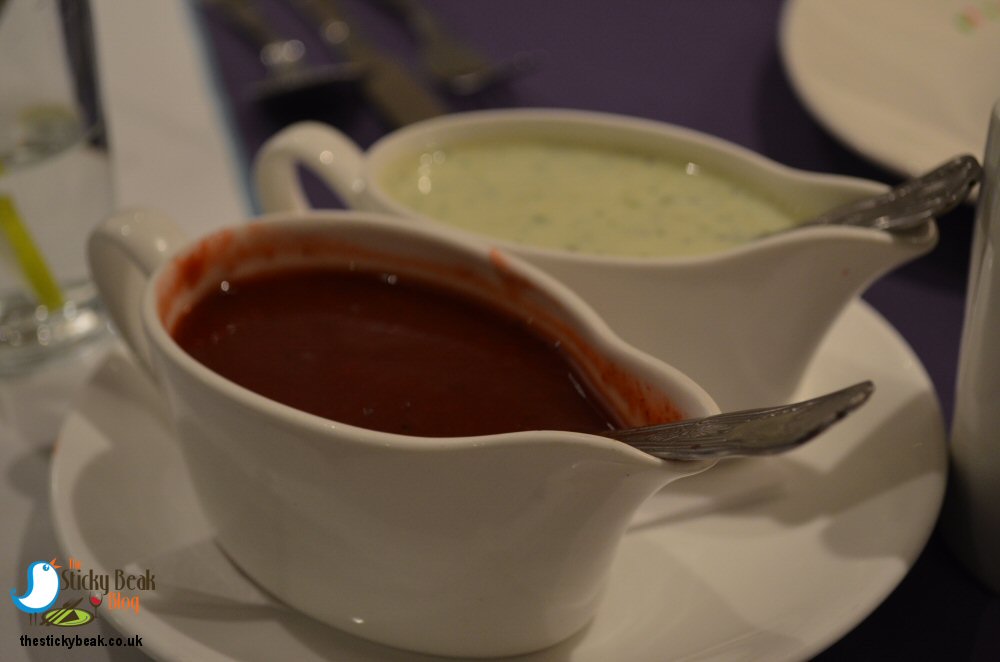 Both dishes had been beautifully presented and garnished artfully, and the mixed salad came in a separate bowl for you to add as you pleased. Two sauces, minted yoghurt and a spicier sweet chilli variety, came in little jugs for you to pour as you wanted too. Our server checked that everything was to our satisfaction and brought some fresh water to the table for me.


I had chosen Monk La Jawab for my main course; Monkfish fillets cooked in herbs, spices and Tamarind and some Pineapple Chilli rice to go with it. The Boy Wonder went for Murgh Chilli Masala and had Potato rice to go with it, and we shared a portion of Honey Naan bread between us. 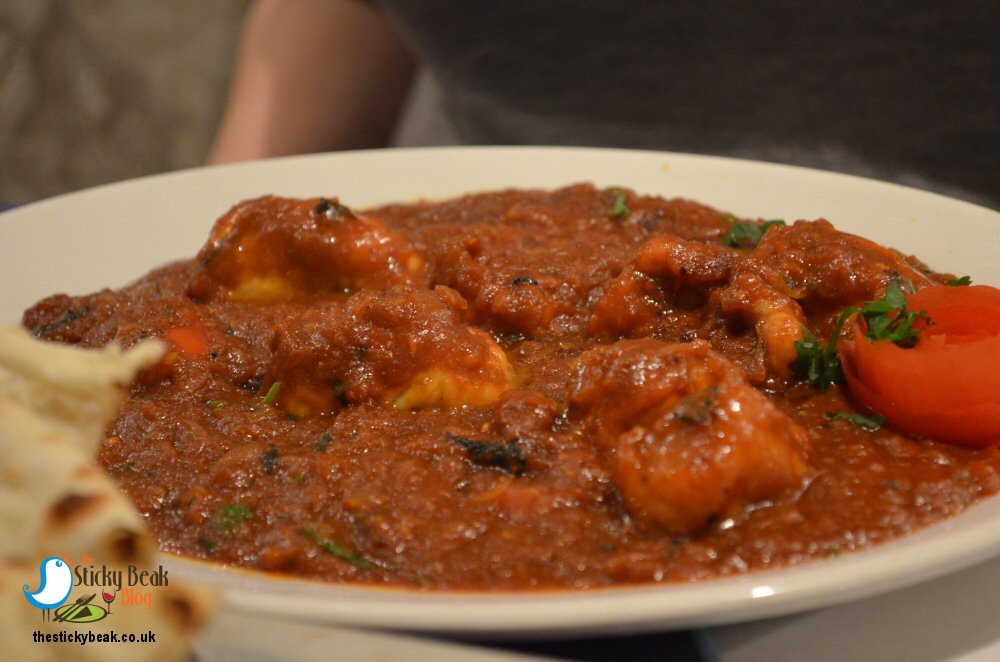 My fish was beautifully moist and thanks to its naturally firm flesh had held its shape well through the cooking process. The sauce was gorgeous with a marvellous sour note to it thanks to the Tamarind, and there was a nice amount of it too, not too much to drown the dish, but enough to scoop up with every mouthful to get the balance of flavour and textures in it.

There was a great amount of fish in this curry and to be honest, I would say it was a fantastic curry, and I’ve had a fair few in my time to compare it to. I enjoyed the rice too with its fresh pieces of Pineapple partnering the Chilli very nicely and the rice grains were fluffy instead of being overly greasy. 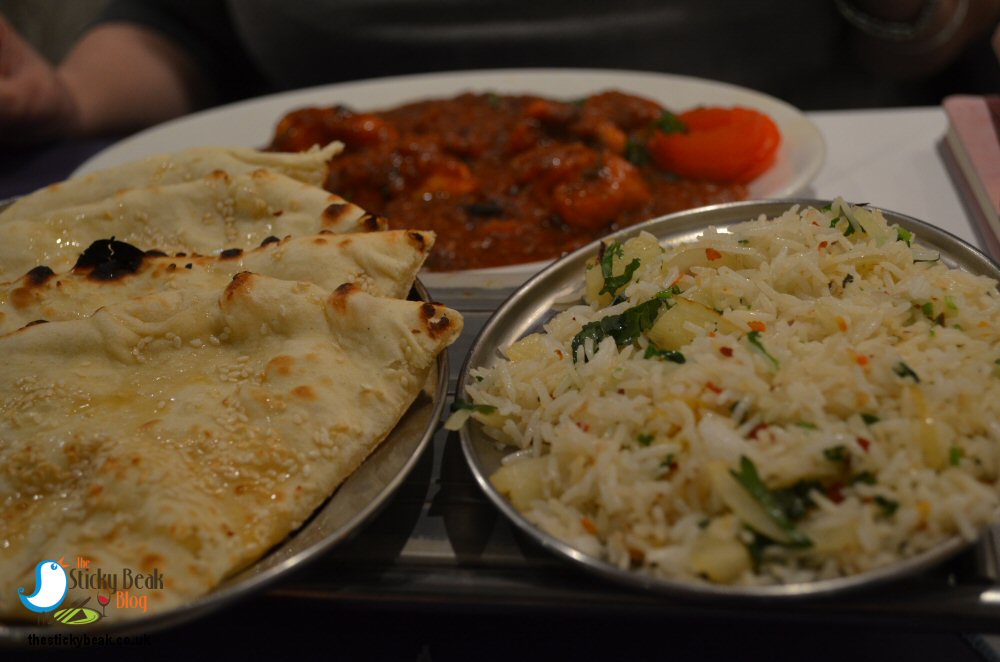 His Nibs’ Chilli Masala was also a winner; it had a nice spicy Chilli flavour but not enough to burn your mouth and have you reaching for the Lassi! Again, the chicken was moist and juicy and there was plenty of it in the curry, but what he really liked was the vegetables being on top and just lightly cooked to retain plenty of taste and texture. 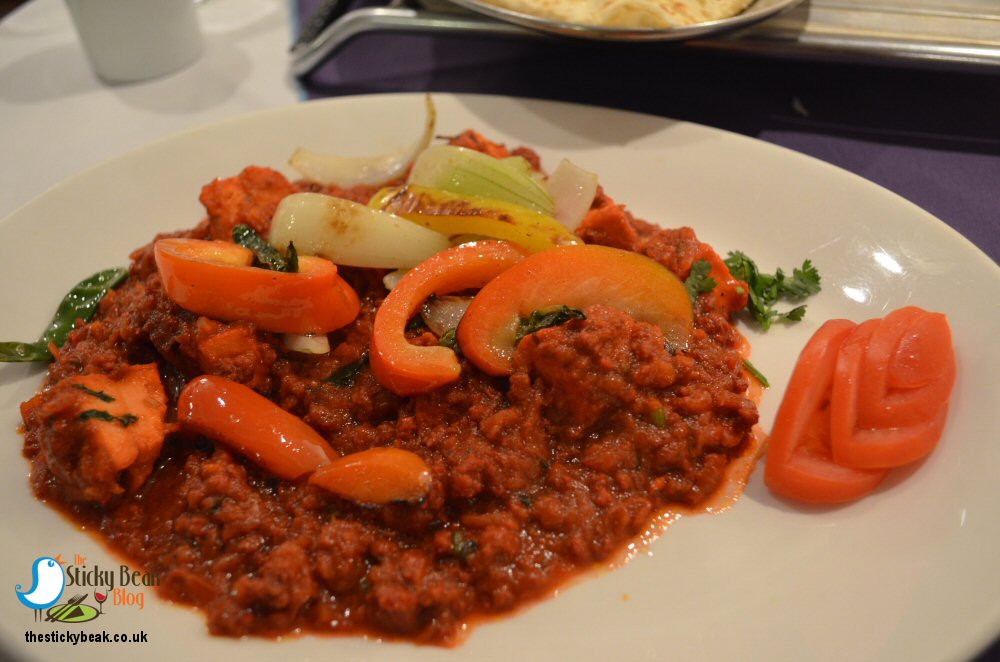 The Potato rice had been very skilfully cooked so that the potato had the merest hint of firmness left to ensure it didn’t disintegrate whilst being soft enough to mingle with the rice when eaten. 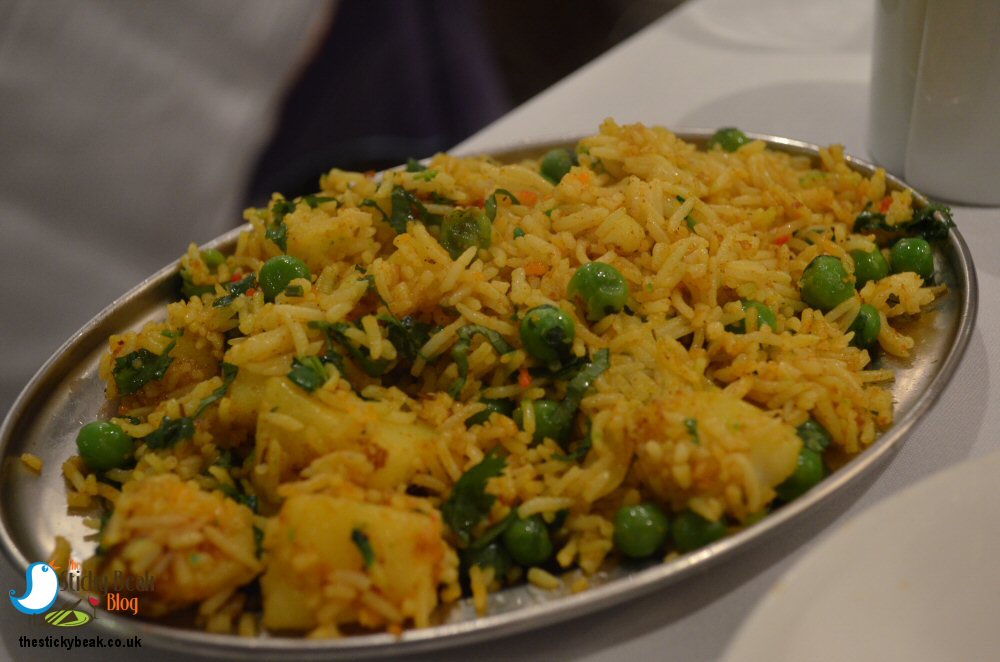 Usually we would have a Peshwari Naan or maybe a garlic version, but the Honey Nan bread just piqued our curiosity. The bread itself was gorgeous; light and fluffy, and this had then been drizzled with a beautifully fragrant honey and scattered with toasted sesame seeds which gave a lovely nutty hint and some welcome texture on the palate. It was the first time we’d had this variety of Naan bread and I have to say it was really super; if you haven’t had this before it is well worth trying. 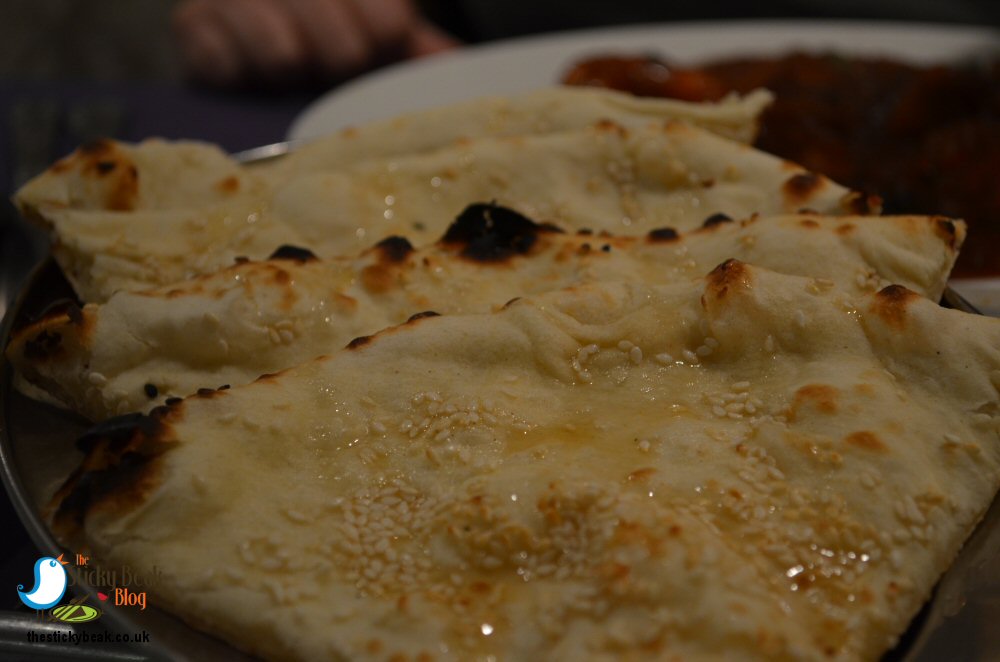 As with the starters, our server came over to ensure that we were happy with the dishes and to check if we needed any further refreshment. Another lovely gentleman came over with some hot towels for us to wipe our hands (even though I was fairly sure my vigorous finger licking had removed any trace of honey) and some fresh Orange segments to cleanse our palates with.

I decided not to have dessert on this occasion but The Man Bird ordered the Fantastica and we both had a Latte coffee to round things off. Yet again we were feeling a little glow of happiness having enjoyed a meal somewhere new to us, and if you haven’t been here before I can heartily recommend it to you dear reader. 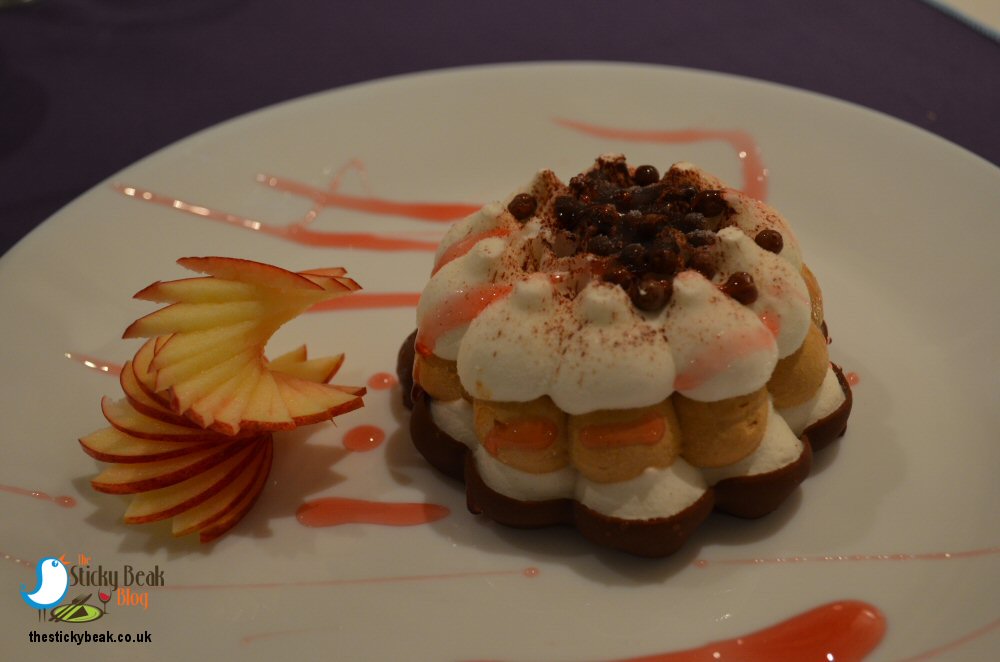 Hot Wings heading over to the team at Elaichi Indian Restaurant in Belper and very much deserved :)