Dinner At The Devonshire Dome in Buxton

It goes without saying what a nosey little Bird I am, so when the invite from Buxton and Leek College and the University of Derby’s Dome Restaurant came it was a no-brainer that a date would swiftly be arranged.

The Dome itself originally housed the magnificent stables of the Duke of Devonshire and indeed the horses were exercised on the perimeter of the Dome as this measured exactly one furlong. Then it housed a hospital before having the magnificent Dome added and being renovated as it stands today; it proudly has the honour of being the largest free standing dome in Europe.

During the day the downstairs of the building plays host to various lectures and contains a Costa coffee stand and the refectory for the students as there are a total of seven industry standard kitchens to produce lunch.

Large scale events can also be held in the Dome, it has capacity for up to 900 people and students from the different courses help to plan, co-ordinate and deliver these events, which gives them the skill sets necessary to work out in the Culinary and Hospitality fields.

For those at entry level there is an exciting range of courses provided by Buxton and Leek College and then those who wish to progress further on can follow the various courses at Derby University's Buxton Campus up to Masters Degree level.

The Dome Restaurant itself is located on the upper floor of the Dome and whilst it is first and foremost a teaching restaurant this in no way detracts from its lovely atmosphere. We were greeted at the entrance and our reservation details taken before our coats were taken and hung up for us. Another student showed us to our table and seated us before placing the napkins gently in our laps and then a lovely young lady poured us some water as we perused the menu.

In addition to the food there is a bar in the restaurant that offers a great selection of wines, beers and spirits; I ordered a glass of Sauvignon Blanc from the server and The Man had a bottle of Peroni. Before long, the refreshments arrived and a lovely young man poured the lager into a glass for His Nibs.

The table itself was laid out absolutely pristinely with proper sharp angles on the cloths and glasses that sparkled perfectly. Each table has more space around it than the commercial restaurants we normally dine in, but this allows you greater privacy as well as the original purpose of allowing the students to do proper silver service in the traditional manner.

First for us to try was the homemade bread served with Butter blended with Pork fat, Dill and Chives; the bread was deliciously warm with that great aroma we all love, and the butter was gorgeously rich and herbed to just the right degree.

We were then brought an Amuse Bouche of Bruscetta with Smoked Ham hock and its Puree and Salted Caramel and I must say the flavours worked really well together and did indeed get the mouth juices flowing. 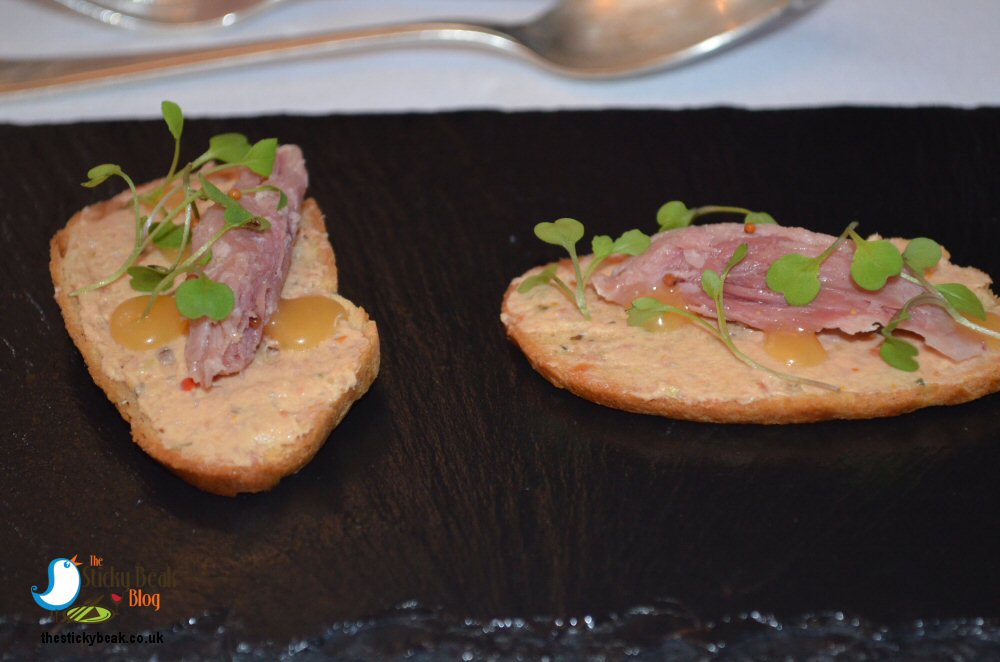 Our table was cleared very efficiently and professionally and we looked forward to our starters; I had chosen the Spinach and Watercress Soup with Poached egg and The Boy Wonder had the Char-grilled Squid, Rocket, Fennel, Radish and Lemon Vinaigrette.

The students prepare the food from 4pm and as we were dining at 7pm the ingredients for our meals were in prime fresh condition and you really could tell.

Our starters were brought to the table in tandem by two lovely servers and placed carefully before us. My soup was a dazzling Verdant green that just popped with fresh flavours in the mouth, and the egg added a rich buttery element to the soup when I burst its yolk. I want to mention as well that the egg was perfectly poached and you couldn’t detect even the merest hint of the poaching liquid.

As for the Man Birds Squid, well he was enjoying every morsel; he said the Squid was cooked amazingly well so that it had its natural balance of soft/firmness and no hint of rubberyness at all. We sat back and both said how much we had enjoyed the first course and were looking forward to an equally great main course, something we relayed to our server when she checked back on us. 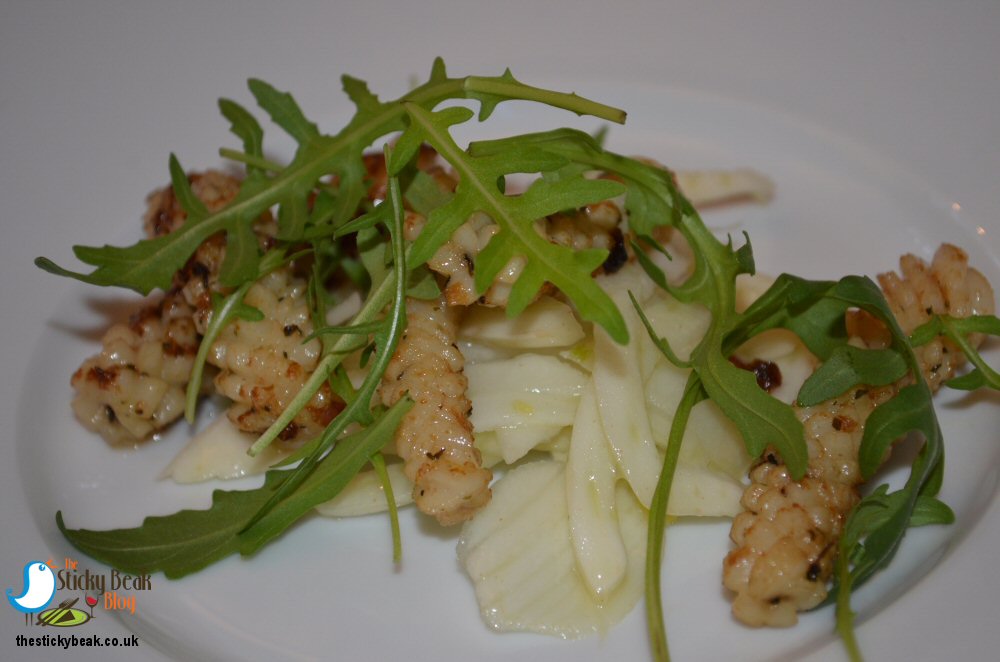 For his main course His Nibs had the Pan seared Pork with puffed wild rice, Leek and Potato croquette, Shallot Puree, baby Carrots and a Lemon Thyme jus whilst I had chosen the Sardines ( swapped for Mackerel that night) with Potato Croquette, Pea puree, Samphire, baby Carrots and gremolata.

Both choices were beautifully presented on the plates and served in tandem by two lovely gentlemen. The Man Birds Pork had been carefully seared and allowed to rest so that the meat was nice and juicy and tender to eat, the rice was nice and crunchy with a great seasoning on it and the Carrots were nice and crunchy. The Croquettes though were just amazing; so incredibly smooth inside but wonderfully crunchy on the outside with just a dash of sea salt to season them. He said that the whole dish was a joy to eat.

My Mackerel was no less delicious it was moist and firm and wonderfully fresh, the Pea puree was packed full of taste and again the croquette was simply yummy. The Man had additional New Potatoes when they were offered but I declined as my plate was well stocked enough for me. We were checked on to see that things were to our satisfaction by the young man who was being the restaurant manager for the evening and our water glasses were again refreshed. 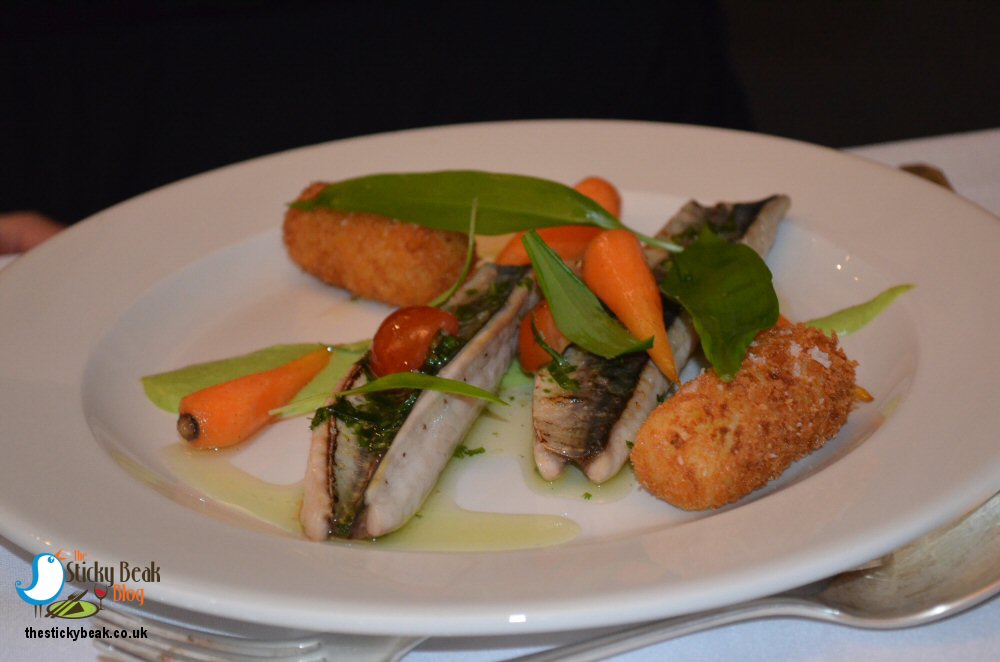 After a short while another young lady came to crumb catch our cloth using very short, deft strokes, and I always think that this is a touch that elevates great establishments into something truly remarkable; it is marvellous to see that the Catering and Hospitality tutors are upholding these benchmarks of excellence and teaching their students how things really should be done.

The pudding I chose was developed by one of the students for his project piece; it was a very beautifully presented deconstructed Apple and Frangipane tart served with Vanilla Ice Cream. All the components were delicious; the Apple was diced and spiced with Cinnamon to give it a superb taste and the Apple had retained some natural crunch so it wasn’t just a mush on the tongue, the pastry was lovely and crumbly not tough at all, and the Frangipane had just the right amount of Almond taste to it. The good quality Vanilla Ice Cream was just the proverbial icing on the cake for a truly lovely dessert. 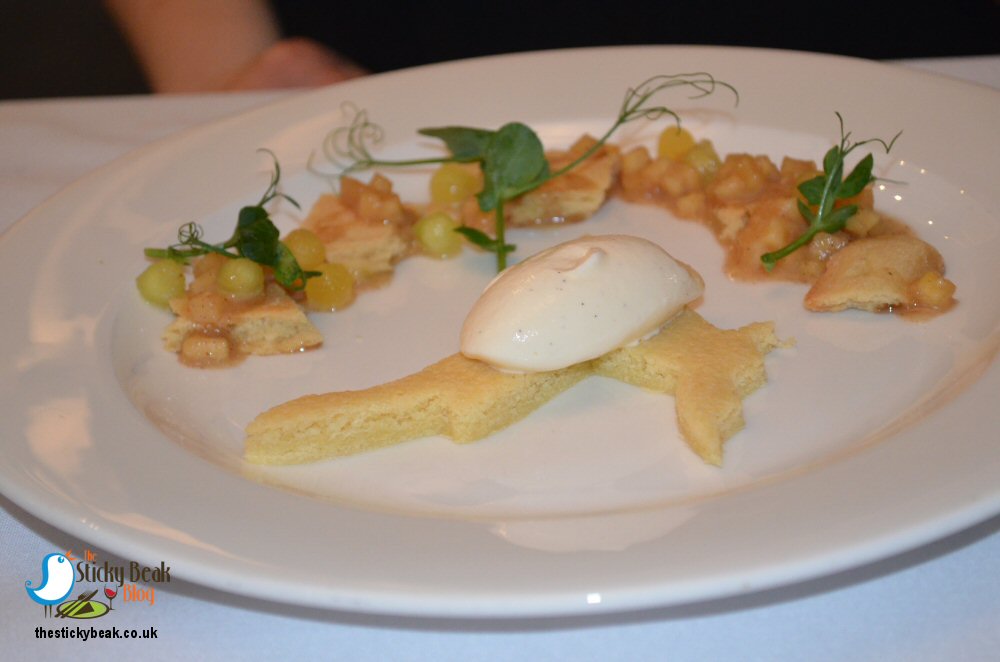 It will come as no surprise that Him Indoors selected the Semi Fredo Chocolate Parfait with Tia Maria Gel, Chocolate crumble and Meringue with Chocolate soup. The Parfait was indecently rich and smooth, so the texture provided by the crumble was a great contrast and the Tia Maria married brilliantly with the chocolate taste; the meringue was presented as a thin sheet rather than a nest type affair and it literally melted when His Nibs popped it into his mouth. He really liked the fact that the Chocolate soup was presented in a separate little jug as not only did it allow him to have the amount he wanted, but it didn’t moisten the crumble so that all the different textures could really be enjoyed. 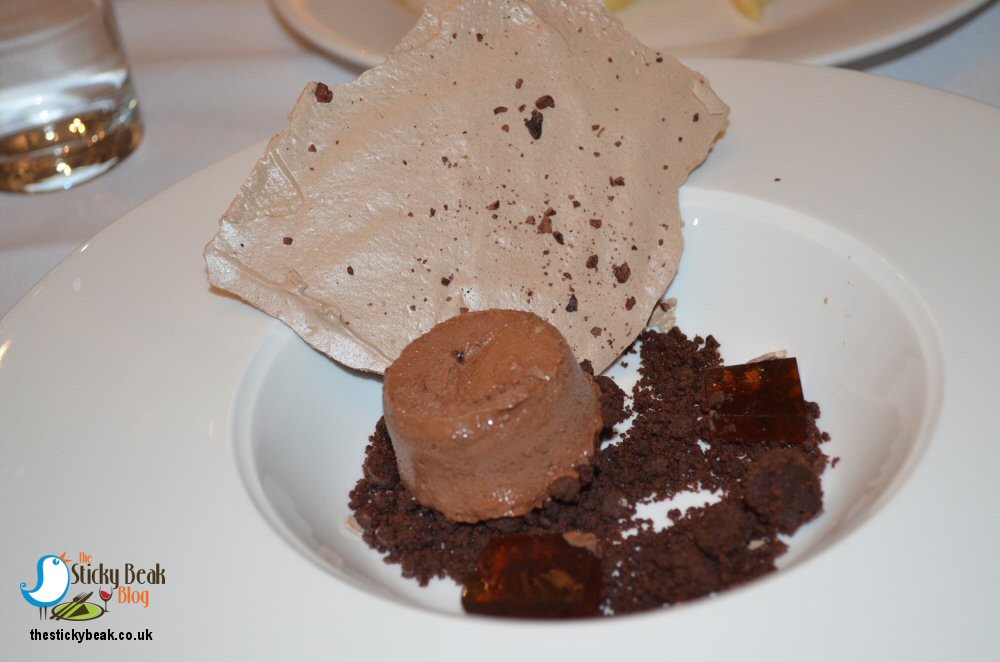 Our evening came to a close with a Cafetiere of fresh filter coffee being placed on our table and milk and sugar jugs being placed on a doily covered salver. I haven’t seen a doily for absolutely ages and it was lovely to see this classic touch at the Dome Restaurant.

As we departed our coats were taken from their hangers and held for us to put on; then we were wished a very pleasant goodnight and our super evening came to a close.

The fact that it is a training restaurant is reflected in the price, a mere £15 for a fantastic 4 course meal, and I have to say that apart from the evening maybe taking 15-20 minutes longer than a “normal” restaurant and the odd shaky hand at the beginning of the service you would never know that it was such a place.

Attention to detail was unsurpassable, the food was a great standard with a nice varied menu and you were made to feel like royalty. So I can heartily recommend you pay the Devonshire Dome in Buxton a visit. 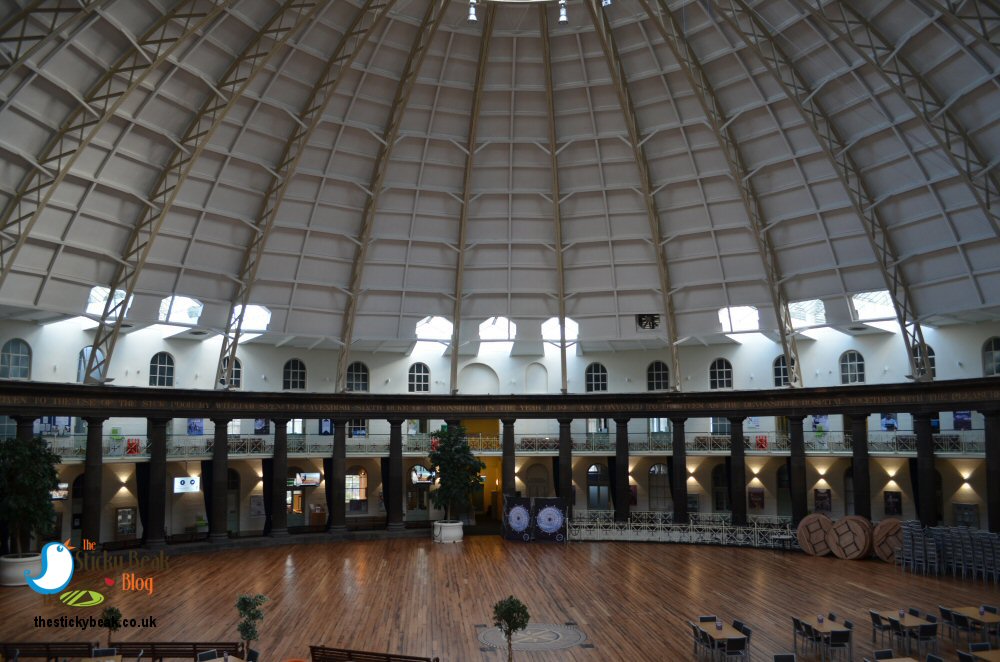 You do need to book a table in advance and the University Students are only open for Dinner service on Thursday evenings, although they do a three course lunch on Thursdays and Fridays for the amazing price of £10.

To make a booking just call 01298 330345. The only thing left to say is Hot Wings flying over the hills to the Dome Restaurant and its talented students :)