Sometimes you come back from somewhere and the awesomeness just overwhelms you doesn’t it? Well, if truth be told, I feel a bit shell-shocked after the utterly amazing night away The Boy Wonder and I have just had courtesy of Heather and her amazing team (especially the gorgeous Magda).

We got an early finish from work meaning we left the nest at 3pm and we were sighing a breath of relaxed bliss in the Yew Lodge Hotel reception at 3.30pm, You can find out more about my stay at the hotel but let me tell you about dinner.

We sashayed down to the bar to enjoy a cheeky pre-dinner tipple (Gin and Tonic for me, a pint of Peroni for His Nibs) and settled into one of the plush chairs to enjoy them. A smartly dressed member of the bar team brought a small bowl of tortilla chips over for us to nibble on and we set about our favourite past-time of people watching. 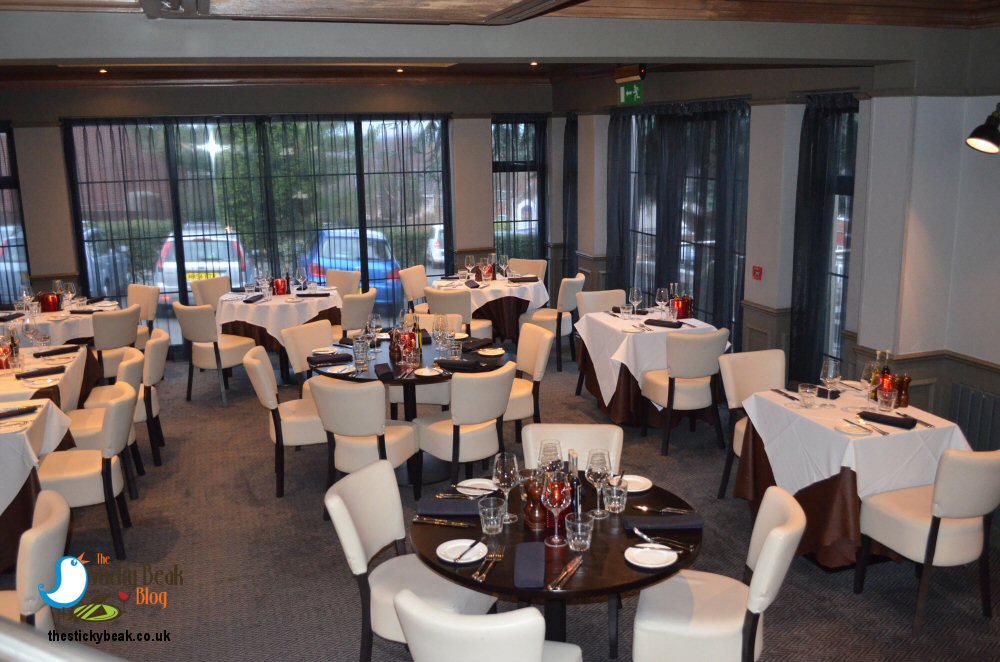 The bar area is decorated in shades of grey, cream and burgundy which gives it a stylish feel and there was a lively atmosphere already, with plenty of laughter and chatter coming from other guests. When our table was ready our drinks were placed on a tray and we were shown to our lovely corner table which afforded us a great view of the restaurant floor and its contemporary style. Some of our fellow diners were also resident in the hotel but there were also a fair number of non-resident diners too. 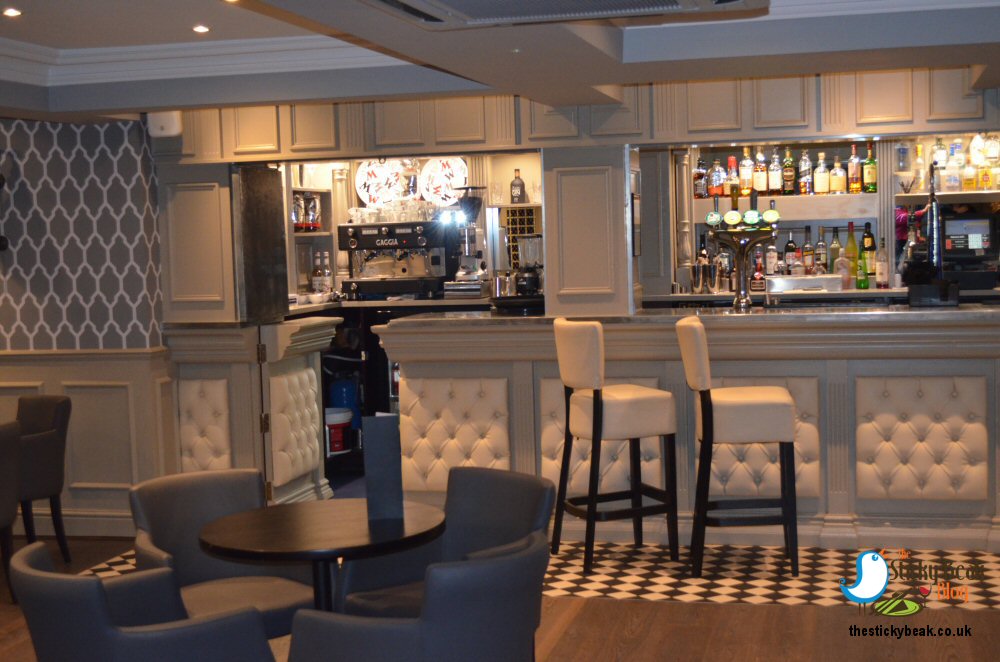 As we perused the extensive menu a smartly liveried waiter (Paul) asked if we would like some Garlic Bread  whilst we made our meal choices; we said yes please and were expecting some slices of garlic bread, so imagine our surprise when a whole pizza based garlic bread was presented to us!. I have to say though, it was absolutely beautiful, just the right amount of garlic flavour on a thin crispy base, and garnished with fresh parsley. 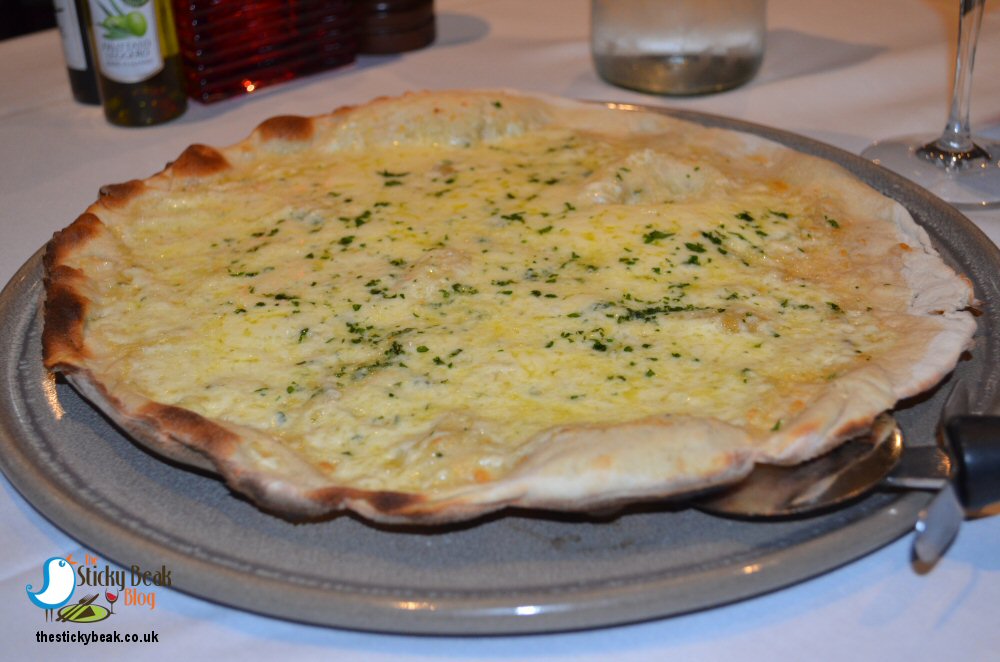 Rather unusually for us we opted to have The Great American sharing platter for our first course. This was a wooden platter laden with Spicy Chicken Wings, Pulled Pork, chunky Guacamole, Tomato Salsa and Nachos with melted Cheese.

Normally it’s just me who will eat wings as The Man doesn’t like the skin but the team at Marco’s New York Italian do the skin fantastically crispy and delicious, so Him Indoors tucked in with gusto and thoroughly enjoyed them.

The pork was lovely and smoky in taste, and it just melted on your tongue. As you know dear reader if it’s green it must be healthy, which in Boy Wonder speak equals boring and tasteless, but again the Marco’s team pulled one out of the bag and made such a blindingly good Guacamole that he had several mouthfuls.

The nachos were lovely and the salsa was amazingly punchy in taste which we both loved. There was more than enough of each item for two to share, and the quality of these entrees had us chirruping in anticipation for our mains. 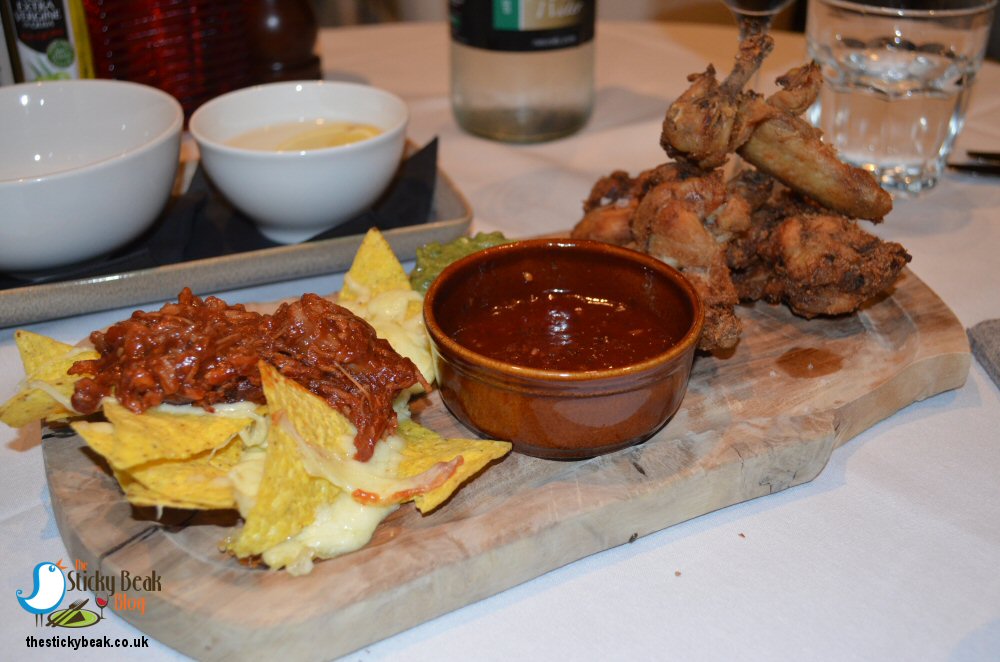 Marco recommends his 10oz New Orleans Cajun Steak and who am I to argue with the Maestro? I can never resist Prawns, so I added Grilled Jumbo Prawns to my order, which already comes with grilled Tomatoes on the vine and Rosemary and Crystal salt fries or Sweet Potato fries if you prefer.

The Man Bird decided to have the rack of Hickory Smoked Baby Back Ribs which come with the Rosemary fries and Russian Red Cabbage Coleslaw, and ordered some onion rings on the side.

We had a superb bottle of Argentinean Malbec (again recommended by my hero) which went exceedingly well with both main courses. As we were tucking into our stunning cuisine another member of staff was taking photos at another table, capturing memories for those diners.

Now, where on earth to start describing my wondrous steak? It was incredibly tender and meltingly moist, bursting with flavour and cooked exactly how I wanted it. There was a nice hint of Bourbon on the tongue and the Currants on top of the steak added a natural sweetness.

The roasted vine tomatoes were juicy and their sweetness had been intensified by the roasting; the fries were very crispy with a lovely hint of the rosemary and salt. My jumbo grilled prawns were just total perfection in their soft, sweet juiciness and were indeed the perfect accompaniment to the steak. 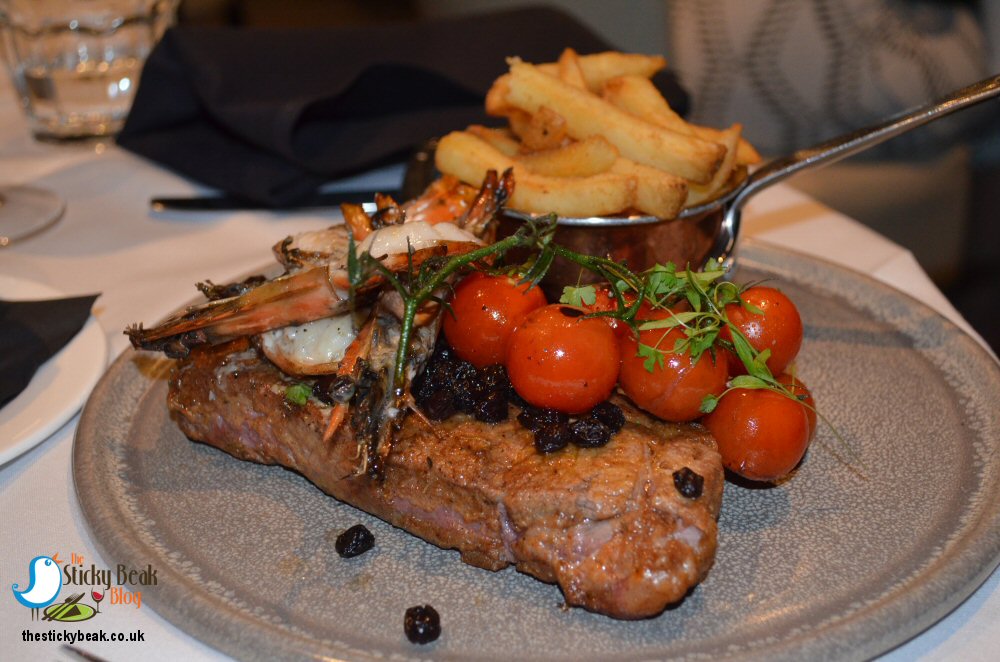 The meal was a real plateful, and there was absolutely no way I was leaving any of it, except the rim of fat that had given my steak its incredible flavour. I’m sorry Mummy Bird, but if I hadn’t been in company the plate would’ve been licked clean!

When they say rack of ribs they mean a full rack of ribs at Marco’s not the usual half rack that a lot of restaurants pass off as a full rack. It’s just as well that they are served on a bed of the fries, as when the coleslaw is on the plate with the ribs you literally cannot see any plate surface.  At all. Not even a Millimetre.

They were a pure pleasure to eat according to His Nibs; all splendid sweet juicy meat with an amazing rich, smoky sauce. The meat just fell apart from the bone and melted like a snowflake on the tongue. Again the fries were judged to be perfectly seasoned and crispy, and the onion rings had a fantastic light and fluffy batter on them.

Surprisingly he really enjoyed the coleslaw too which given his previously mentioned aversion to vegetables is high praise indeed. I had a sneaky forkful and it was lovely crunchy coleslaw with a slight tang to the Mayonnaise that I loved.

In Marco’s New York Italian restaurant they cook everything to your pace of eating to ensure that all the food comes out as perfect as it can be for you to get the full pleasure of the dish. At this juncture we asked for a little breather before we ordered our puddings;

I had an item from the specials menu, the Melting Chocolate Truffle cake with Vanilla Ice Cream, and Boy Wonder had the New York Brownie served warm with Milk Ice Cream. Both desserts were decadently rich and intense in flavour and the Milk Ice Cream was lovely and sweet, slightly richer than its “normal” counterpart. 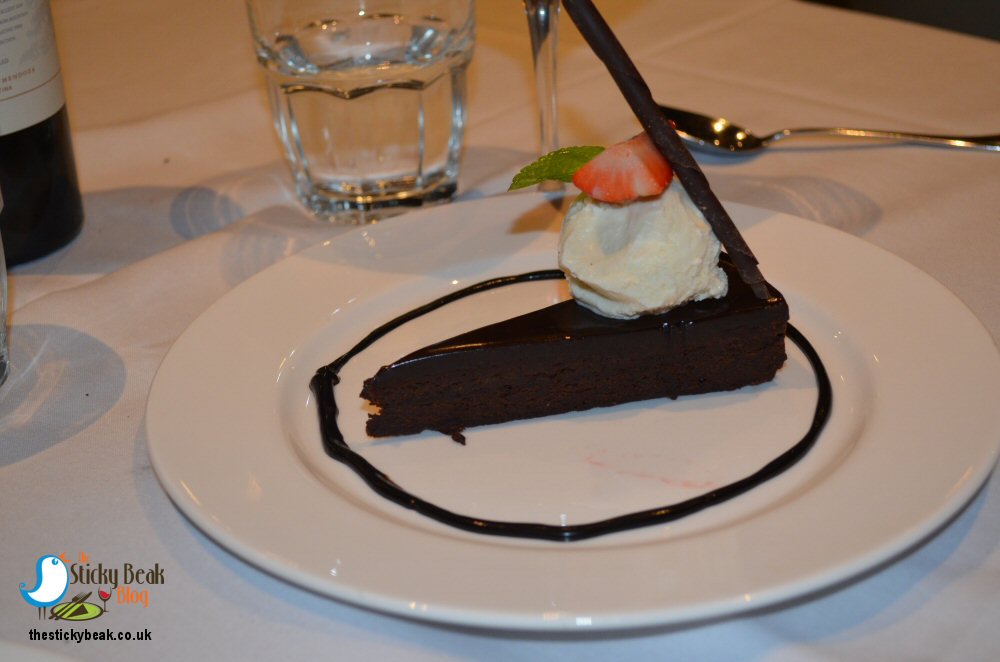 How on earth it’s possible to make a Brownie with such a depth of flavour without it being sickly or cloying is beyond me, so I have put it down to the “Marco Magic”. God, I love Marco Pierre White, have I mentioned that already?

We had an incredible evening in Marco’s, in no small part due to our servers Paul and Jack and the restaurant manager, Muzzi. Obviously the Chef played a part in the success too.

The best bit though is the fact that Yew Lodge Hotel and Marco’s New York Italian, being just off J24 of the M1 is so close and accessible from our nest just off J28, I mean 30 minutes from door-to-door on a Friday afternoon is more than do-able. I never thought I would be saying this (even in a roundabout way) to MPW but here goes..... “Hot Wings” ahoy!!