Dinner At The Recently Refurbished Hanging Gate Near Belper

The weekend looked like getting off to a cracking start as we headed off for dinner on a Friday night, thanks to the kind invitation from the team at Vintage Inn’s recently refurbished venue, The Hanging Gate at Shottle Gate near Belper. Even better, there was plenty of parking to be had as we swung into the large car park area.

From the outside The Hanging Gate looked like a fairly modestly sized venue, but when you step inside and mooch about, it’s a very different story! The first thing you see as you walk through the door is the traditional bar area, complete with fire and ample comfy seats and tables; those with pooches will be glad to hear that The Hanging Gate is dog-friendly in the bar area.

To one side of the main bar and down a couple of steps, is what I would describe as a snug-cum-bar overflow area which you can enjoy a meal at, or simply have a quiet drink away from the bar. There were some other couples in this area that, like us, had arrived a little ahead of their reservation time so were sipping a drink and warming up from the cold outside. 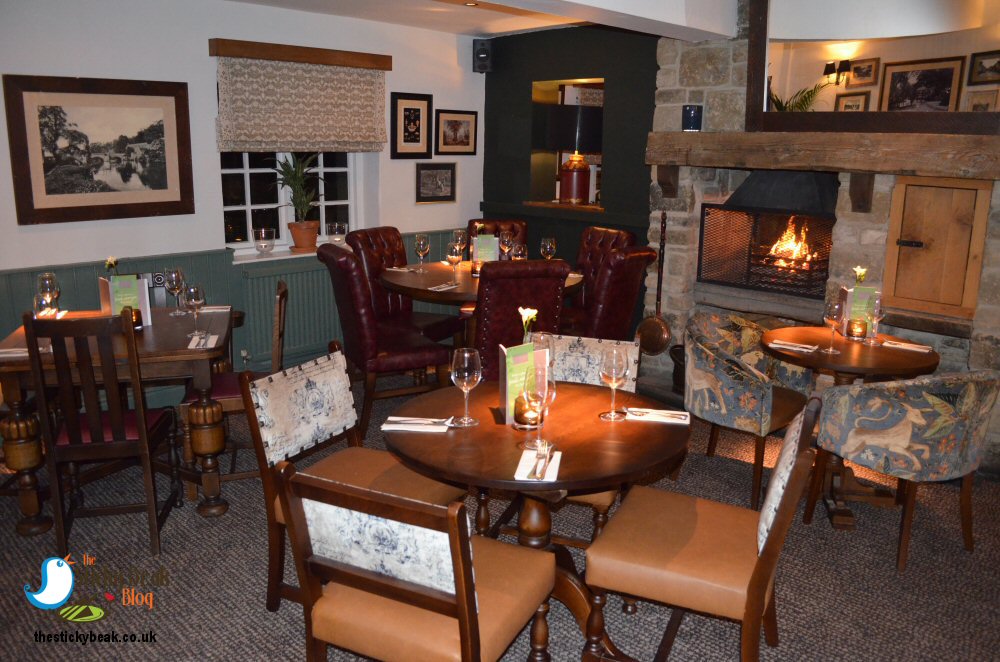 Following the refurbishment in October 2018, the separate areas all flow seamlessly together as you go from one to the other, and although it’s much more up-to-date and fresher, The Hanging Gate still has that lovely traditional pub feel to it.

We were taken through to the main dining area which boasts forest green painted walls to compliment the abundance of natural wood and stone of the 250 year old premises. I really liked the tapestry-backed chairs; they had a great tactile appeal as well as fitting in nicely with the decor. To prevent the space from feeling small and claustrophobic, the ceilings and upper half of a couple of the walls had been painted white. 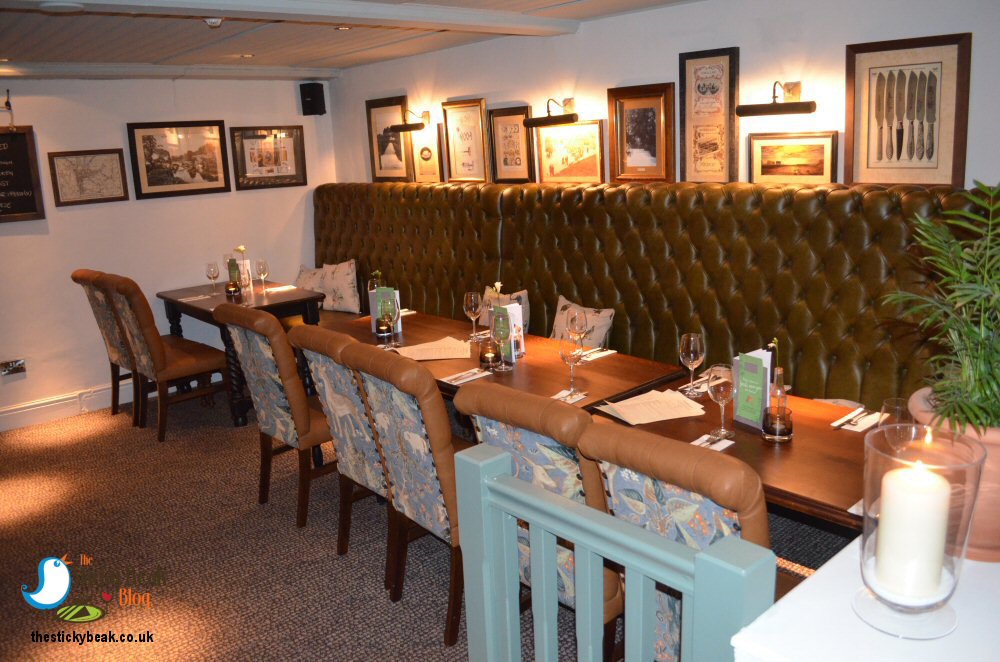 Karen was taking care of us for the evening, and she drew our attention to the “weekend treat” menu as well as the regular menu. The weekend treat menu offers couples, or pairs of friends, to enjoy 2 courses for £22 per person, or 3 courses for £26 per person with a bottle of wine to share included. Those who aren’t particularly fans of the grape can indulge in a selection of bottled beers, ciders or soft drinks, and you get 2 drinks per person if you choose this option.

We were sorely tempted by this menu, but His Nibs was just hanging his nose for Hunters Chicken which is on the regular menu, so that’s where we concentrated our attention. To kick things off I opted for the oven baked Button and Portobello Mushrooms in a Garlic and mature Cheddar sauce served with rustic bread, and The Man chose Seared Scallops with crispy Bacon and Black Pudding, served on a Sage Potato purée. We didn’t have too long to wait before Karen was bringing the gorgeous looking morsels over to us. 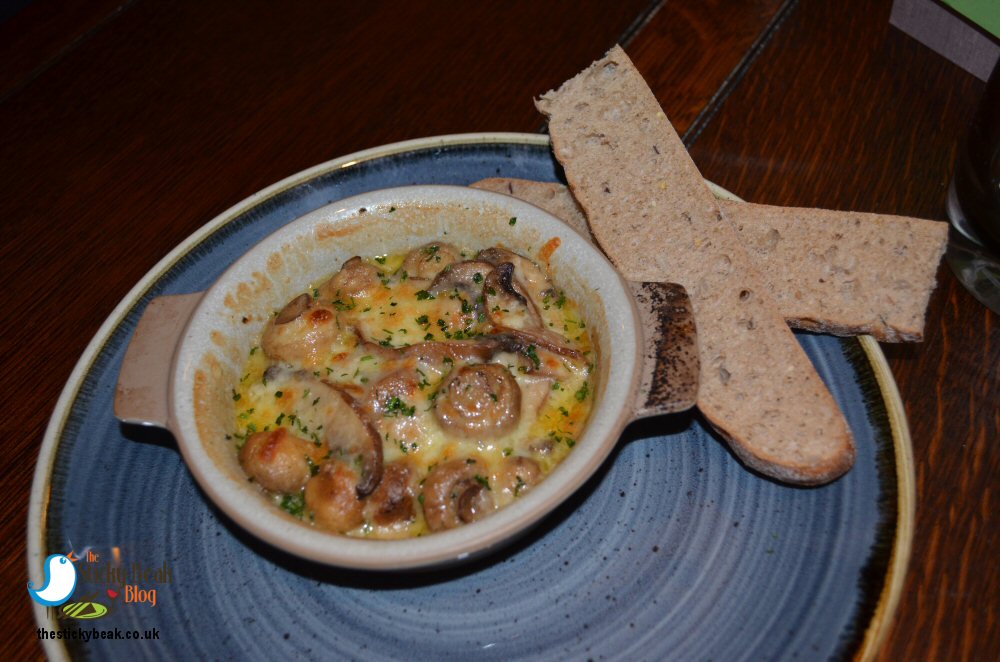 I dug into the layer of melted Cheddar that covered the medley of Mushrooms and inhaled the steam-bound, garlic laced fumes – yummy. There were plenty of Mushrooms to tuck into, and they had a great, firm, satisfying texture to them that soon settled my insistent appetite pangs. I was impressed by the balance of garlic and cheese notes in the sauce, neither overwhelmed the other. I was even more impressed however by the lovely large pieces of lightly toasted, warm bread that came with the dish; there was certainly more than enough of it to mop up every last millilitre of remaining sauce.

The Man Bird is a recent convert to the pleasures of Scallops and Black Pudding, but he’s making up for lost time now let me assure you! He was pleased to report that the sweet, juicy Scallops had been cooked to perfection and weren’t at all rubbery. The thin slices of streaky Bacon were nicely crisped for texture and the mini rounds of butcher-quality Black Pudding added a fab depth of flavour to the dish. Glass-smooth Potato purée had been augmented with the fresh aromatic notes of Sage, adding yet another facet of taste to this delightful starter. 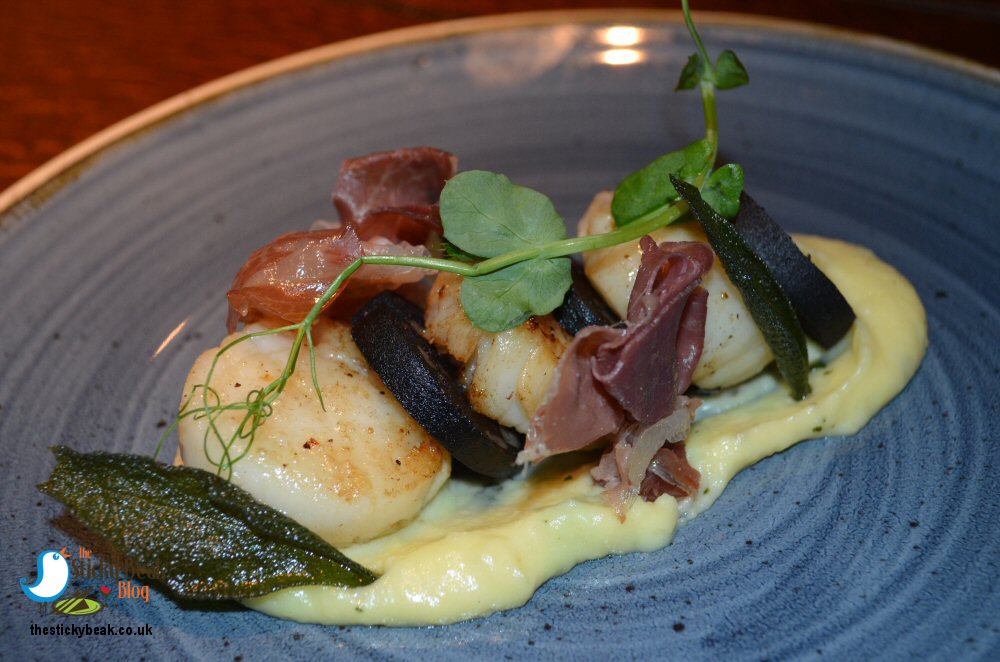 Karen had come over to check how we were getting on with our starters (very nicely, we’d said) and was happy to see that both plates were whistle clean a short while later. We were equally happy to see her bring out our main meals in due course!

The Boy Wonders’ eyes lit up as he saw the huge plateful of food that awaited his attention, and his mouth watered at the marvellous smell of it too. At The Hanging Gate they cover their chicken breast with smoked Cheddar cheese and streaky bacon and serve the rich, tangy BBQ sauce in a separate jug so that you control how much you want to add. Those who particularly love BBQ sauce can request extra too, no questions asked or judgement made. Triple cooked chips come with this meal and they were fab; crispy on the outside with lovely soft, fluffy inners. Portobello mushroom slices are enrobed in a smoky tomato sauce that really suits them and ties in nicely with the BBQ sauce too. This was a super interpretation of a classic favourite dish. 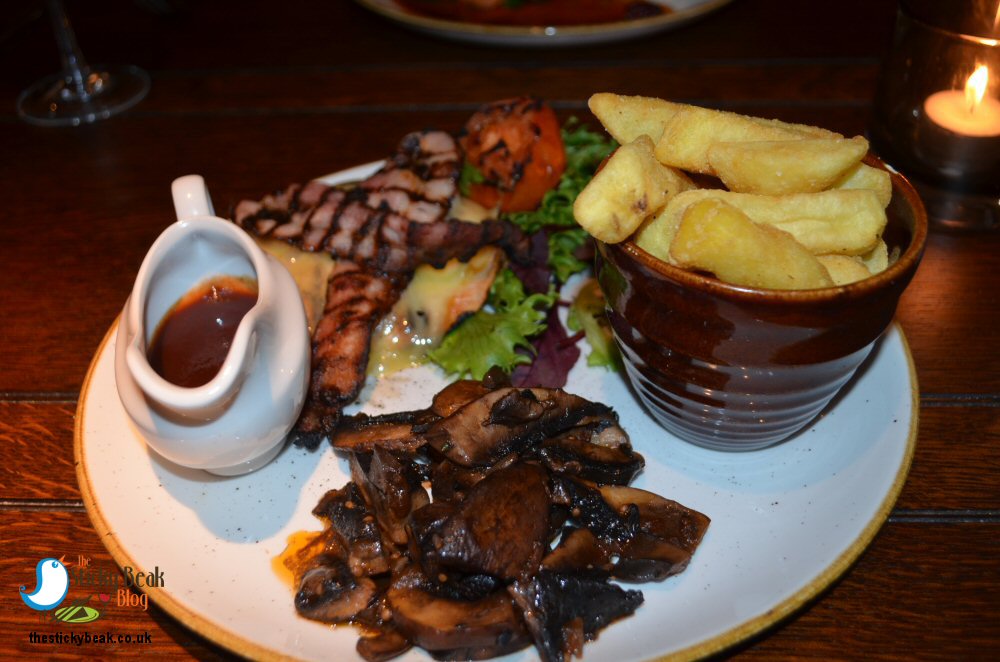 As is his habit, The Man Bird had ordered a portion of homemade Onion rings to accompany his main dish, and we shared them. I have to say that they were stonkingly good; in fact had there been a slightly thicker layer of the fabulously crispy light batter around them, they would’ve scooped the “Best Onion Rings” award. Seriously good stuff.

So, on to my main course: Slow cooked Belly Pork, which comes with Dauphinoise Potatoes, Green Beans, Courgettes, Honey-roasted Carrots, and an Elderflower and Blackberry jus. I’m going to get my gripe out of the way first, and those of you who know me and my appetite well won’t be surprised by my comment; I have had larger portions of Belly Pork to be honest, and for the price of £15.95 would’ve expected a bit more bang for my buck. 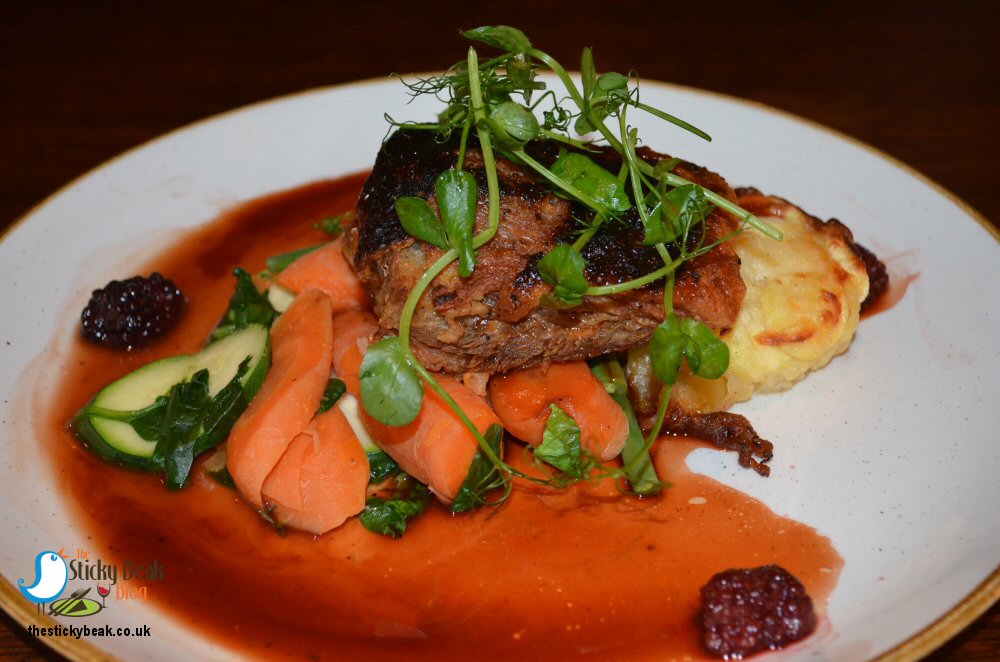 The Pork on the underside was deliciously mild and creamy in flavour and came away in pretty ribbons under my steak knife. For those of us who like a thicker layer of crackling and more well-cooked meat this is a bobby dazzler; those who prefer the tenderer, underside meat may feel a little hard done by. As it was I cut into the crackling top and savoured the sticky, fruity jus covering it. All the vegetables had a little of their firmness left, so that they were satisfying to bite into and chew; they didn’t just disintegrate in the mouth. The disintegration in the mouth element was left to the Dauphinoise Potato, which I found to be a smidge too soft for my personal preference; there was nothing wrong with it, don’t misunderstand, but I like a little more bite to my ‘taters. 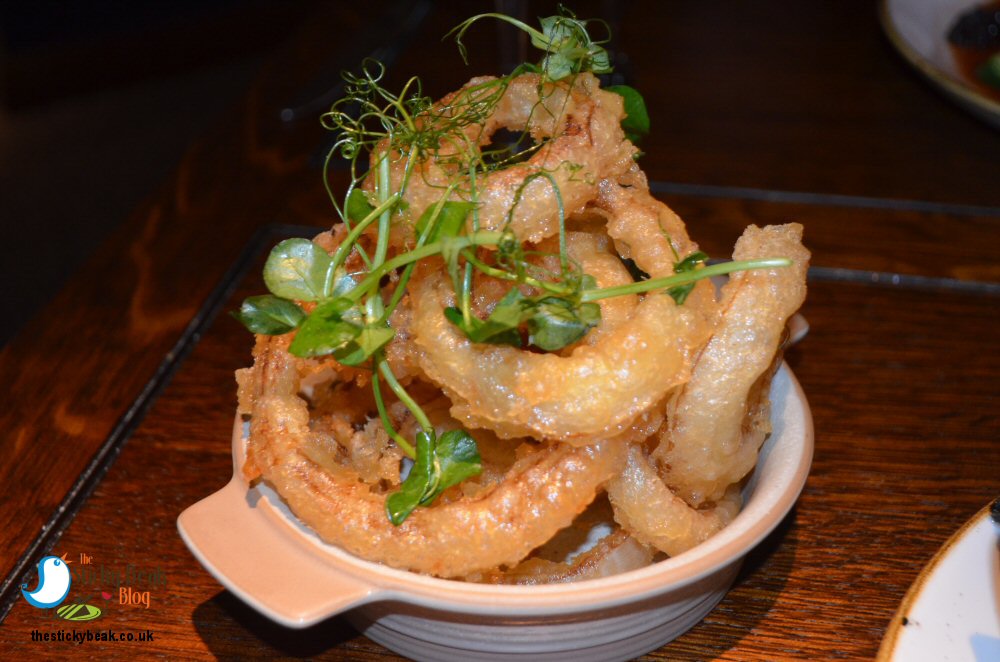 So having done a check-back, and duly taken away our empty plates, Karen came over with the pudding menu. There are plenty of crowd pleasers to choose from and it took the pair of us a while to whittle down to our final choices. Eventually I went for the Bramley Apple Pie and Him Indoors chose the Carrot Cake Cheesecake.

Rather considerately, there was a nice interlude between our main courses and desserts; maybe this was by design from the attentive team at The Hanging Gate, or maybe it was thanks to the large party next door getting their starters?  Whatever the reason, we were glad of this hiatus – it gave us a bit of time for our food to go down and create space for the sweet treats to come. 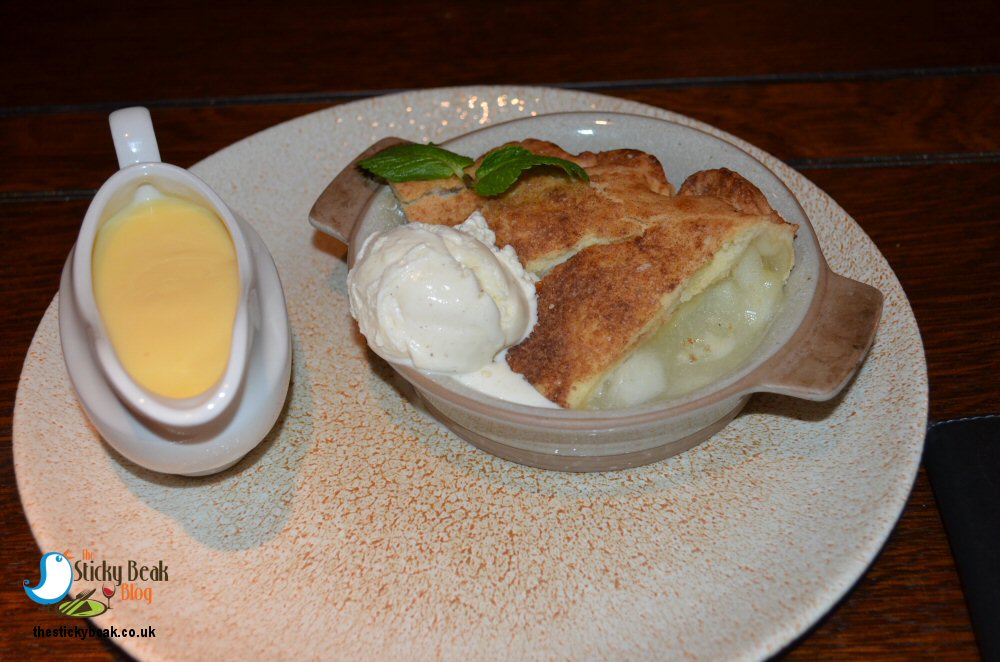 The shortcrust pastry that encased my sliced Apple was super: thick enough to satisfy, with a nice richness and texture that clung just long enough to the mouth to be really savoured. Similarly, the Bramley Apple was cooked to retain a little of its firmness so that its sweetness could be appreciated fully. A generous dollop of good quality vanilla pod Ice Cream was slowly melting on the warm pastry, and when I poured over the hot, creamy custard from a separate jug it melted even more. My mouth revelled in the contrasting temperatures of the custard and Ice cream, and my palate applauded how the vanilla and cream elements melded together . A very enjoyable pudding; simple but effective. 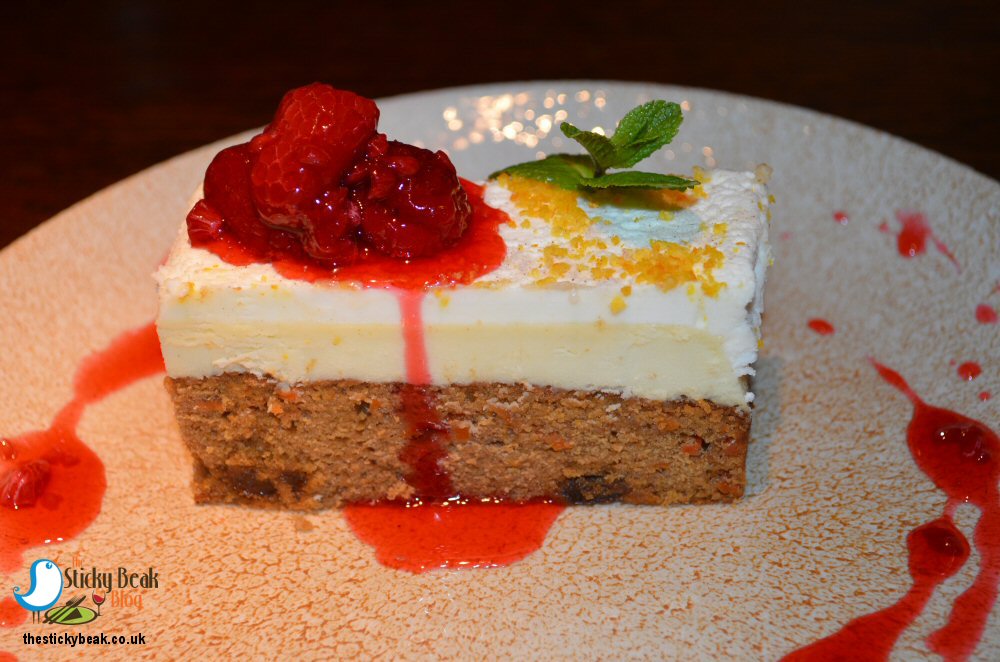 His Nibs was chowing down on his Carrot Cake Cheesecake, totally smitten with the moist, spiced Carrot cake layer. I was offered a spoonful; a rare occurrence to be given so much, so I eagerly took the spoon and swirled the contents around my mouth. I have to agree that the cake layer was delightful; a nice combination of spices had been used, and the texture was great. The cheesecake “frosting” was just as good. Sometimes you get what I call “tooth tingle” from cupcake or cake frostings – they’re simply too sweet and elicit a defensive response from the teeth. Thankfully this was not the case at all with this glorious dessert! Surprisingly for such an indulgent pudding, this Carrot Cake Cheesecake isn’t cloying in the least and doesn’t lie heavy on the tummy either, making it the perfect conclusion to anyone’s meal.

Two black coffees were supped and savoured, and all too soon it was time for us to get in the jalopy and come back to the nest. Apart from my gripe about the portion size of my main course (which is an entirely personal judgement), the meal had been lovely. I would be tempted to go back and have the “weekend treat” menu for sure, as I think this is absolutely cracking value for money!